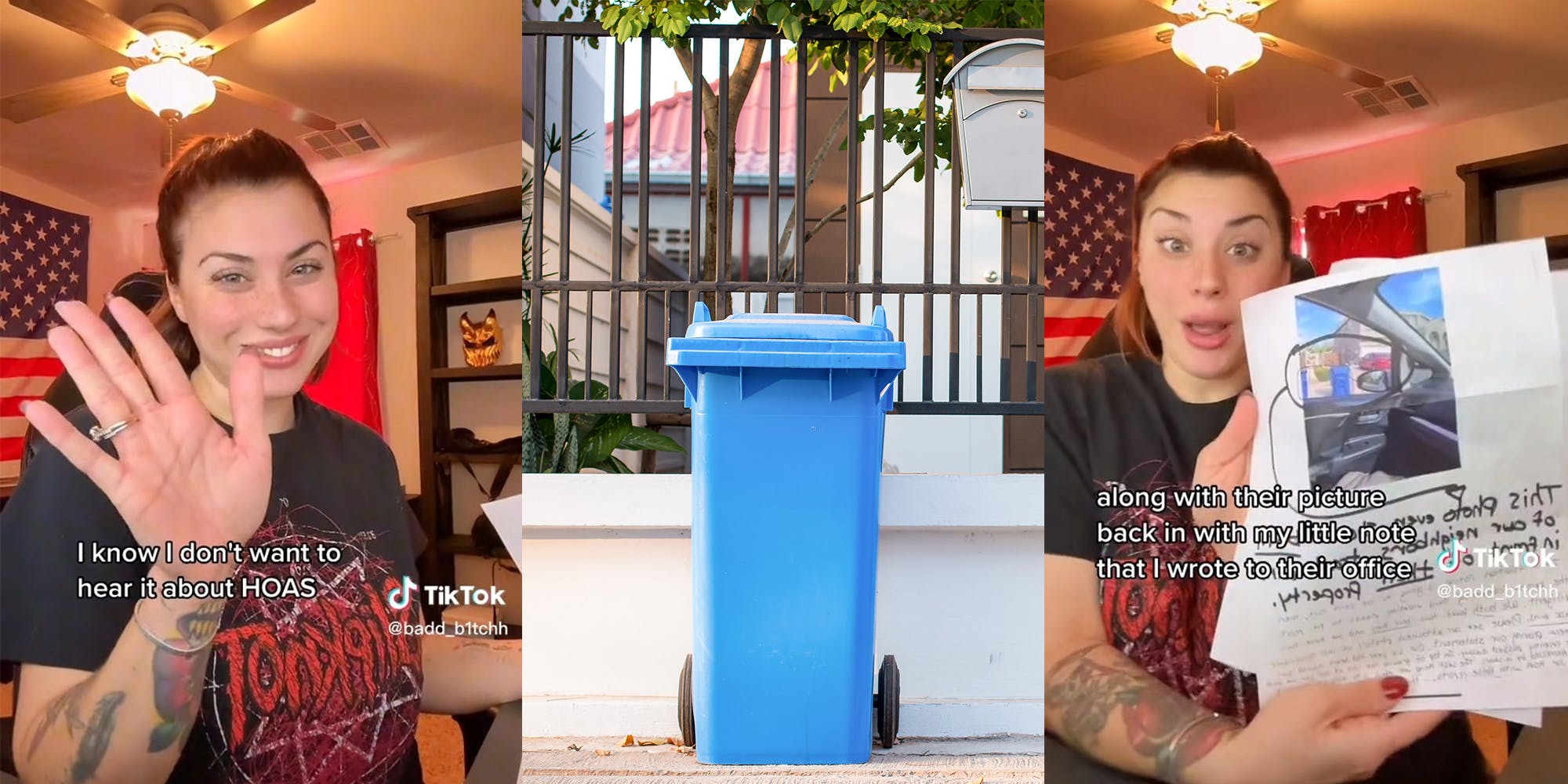 There’s no shortage of anecdotes circulating the internet that highlight people’s frustrations in dealing with homeowners associations. TikTok user Toni (@bad_b1tchh) now has a frustrating HOA tale of her own that’s quickly going viral.

In the clip, she delineates how the HOA wrongly accused her household of leaving their trash bins out for three days before bringing them back inside. Toni says this isn’t the case, and explains how she methodically picked apart their “evidence” that her bins were supposedly outside.

The TikToker claims that the HOA sent her a letter in the mail which included a photo that “her” bins were outside her home. However, Toni annotated their photo clearly showing that they mistook another resident’s home for her own. She then provides a series of time-stamped security camera footage that show her neighbor’s bins, her husband bringing out their own receptacles, and then her husband bringing them back inside on the same day.

Toni also shares her response to the HOA’s letter in the video with a letter of her own, where she flat-out tells the organization that they need to be more diligent and not harass her when they are unable to get their facts straight.

Additionally, she tells the HOA that their false accusations of not complying with their rules are causing undue stress to her family as they just went through the tragic loss of their 6-year-old son.

“So yes I will be mailing these pictures along with their picture back in my little note that I wrote to their office letting them know that if they’re going to make a violation they better be right and making it to the right person,” she says. “Because I’m not the one to be fucked with.”

Throngs of TikTokers in the comments section of the video expressed their condolences for Toni’s loss while also praising her meticulousness in shutting down the HOA’s false claims.

One user wrote, “sorry for your loss that’s right receipts.”

Another user thought that she should’ve sent an invoice to the HOA for forcing her to deal with the false claim, writing, “I’d be sending them an invoice for the paper, ink, postage, & a “false claim” fee. Doubt they’d pay, but it would make a point.”

The Daily Dot has reached out to Toni via TikTok comment for further information.

The post ‘If they’re going to make a violation they better be right’: Woman says HOA harassed her family after wrongly accusing them of leaving out their trash bins appeared first on The Daily Dot.

‘I’m just so confused. Who would pack a box like this?’: Woman shares ‘nightmare’ Bath & Body Works order experience after LaserShip botched delivery
‘So this is the first thief of today’: Walgreens employee records 2 thieves walking out with carts full of items in one day
Advertisement