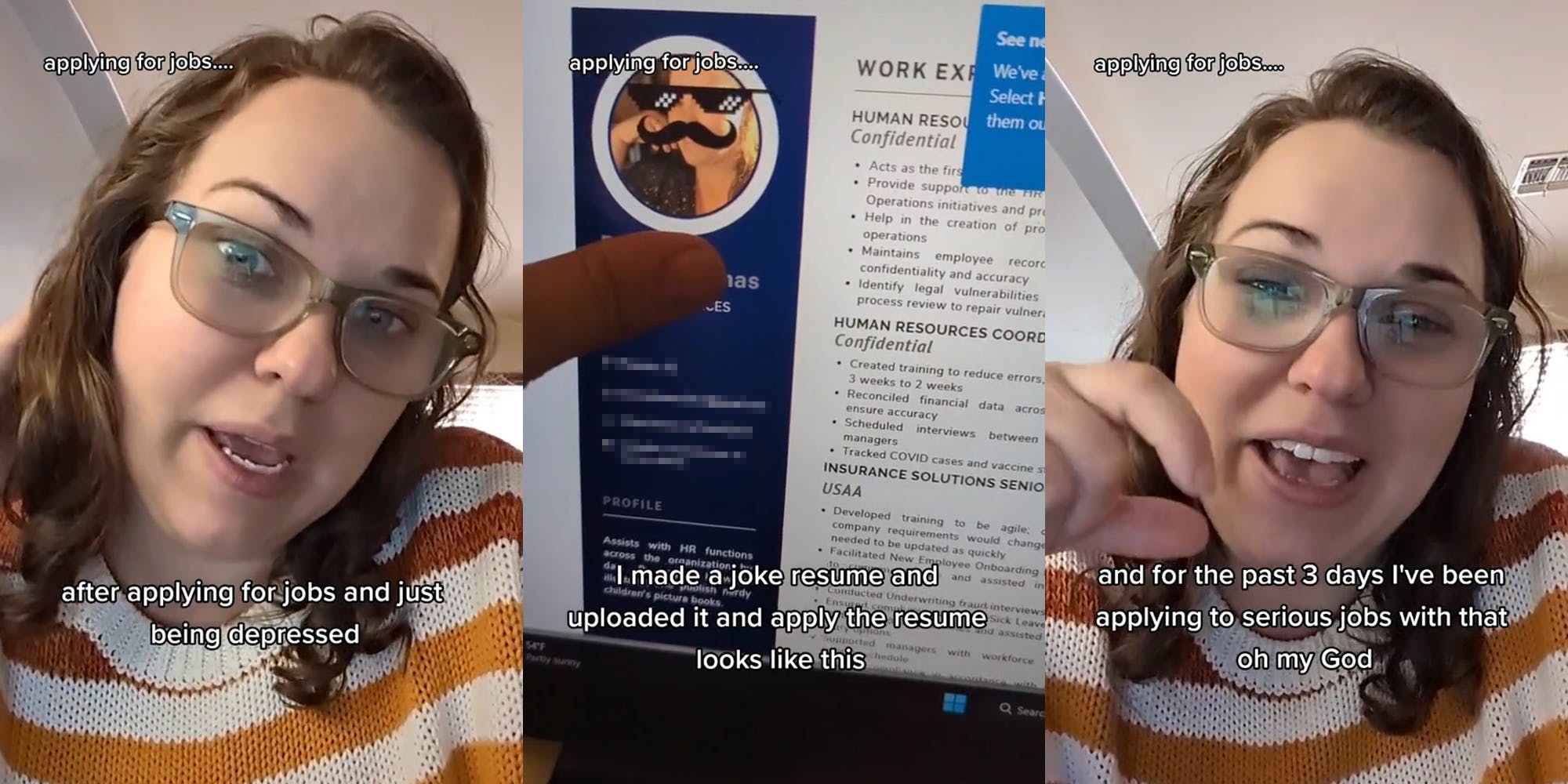 A woman went viral on TikTok after realizing she accidentally submitted a satirical resume to multiple jobs on the popular job site LinkedIn.

The video, uploaded by user Brenna (@happyboxes.art), shows her with a shocked expression as she stares into the camera saying she “made a mistake.” Brenna claims that during her job hunt, she stumbled across many jobs on LinkedIn from companies that are labeled“confidential” because the company “just doesn’t want you to know their name yet.”

One day, in an “unhinged moment of madness,” she says she created a joke resume and reveals it to her followers in the clip. The resume doesn’t have her name, all of her job occupations are labeled as “confidential,” and her picture has a mustache and sunglasses.

Unbeknownst to Brenna, she “forgot” to delete the joke resume and for the past three days she claims she has inadvertently applied to many serious jobs using it.

The mistake hits her hard as she tries to laugh it off, saying she hopes the recruiters “have a sense of humor.” However, she doubts this, saying she’s “probably not going to get callbacks on any of those applications.”

The video racked up over 850,000 views as of Saturday where recruiters in the comments found the resume funny and shared they would’ve enjoyed stumbling across one like that.

“Recruiter here! That would totally make my day!!!” one recruiter said.

“As a recruiter of 6 years, I’d call you,” another wrote. “This is gold and just what I need to smile lmao.”

“We do!!! I would be crying laughing if I saw that resume I’d probs call you and offer you a job as well!” a third commented.

Other users shared when they or someone they knew sent out resumes with mistakes.

“Worked at a winery and couldn’t remember my jobtitle. While updating my resume I put a temp title, but I forgot. Sent out resumes saying I was a wino,” one person shared.

“One time I was making my dads resume with him and we put ‘I want a job blah blah blah’ as the headline, we forgot to go back and edit that part,” a second stated.

“I accidentally uploaded a photo of my dog instead of a headshot on an application. I did not get hired,” a third said.

There was a viewer who even sent out a satirical resume as well, writing, “I did this once. I jokingly put hogwarts as my post secondary with a major in potions….meant to go back and fix it and never did!“

The post ‘I’m probably not gonna get callbacks’: Woman says she’s been accidentally applying to multiple jobs on LinkedIn with ‘joke’ resume appeared first on The Daily Dot.

‘I have proof’: Worker says she was fired after being accused of calling out to go on a date
‘They accidentally threw this away’: Woman finds unused Apple products while dumpster diving at Apple Store
Advertisement