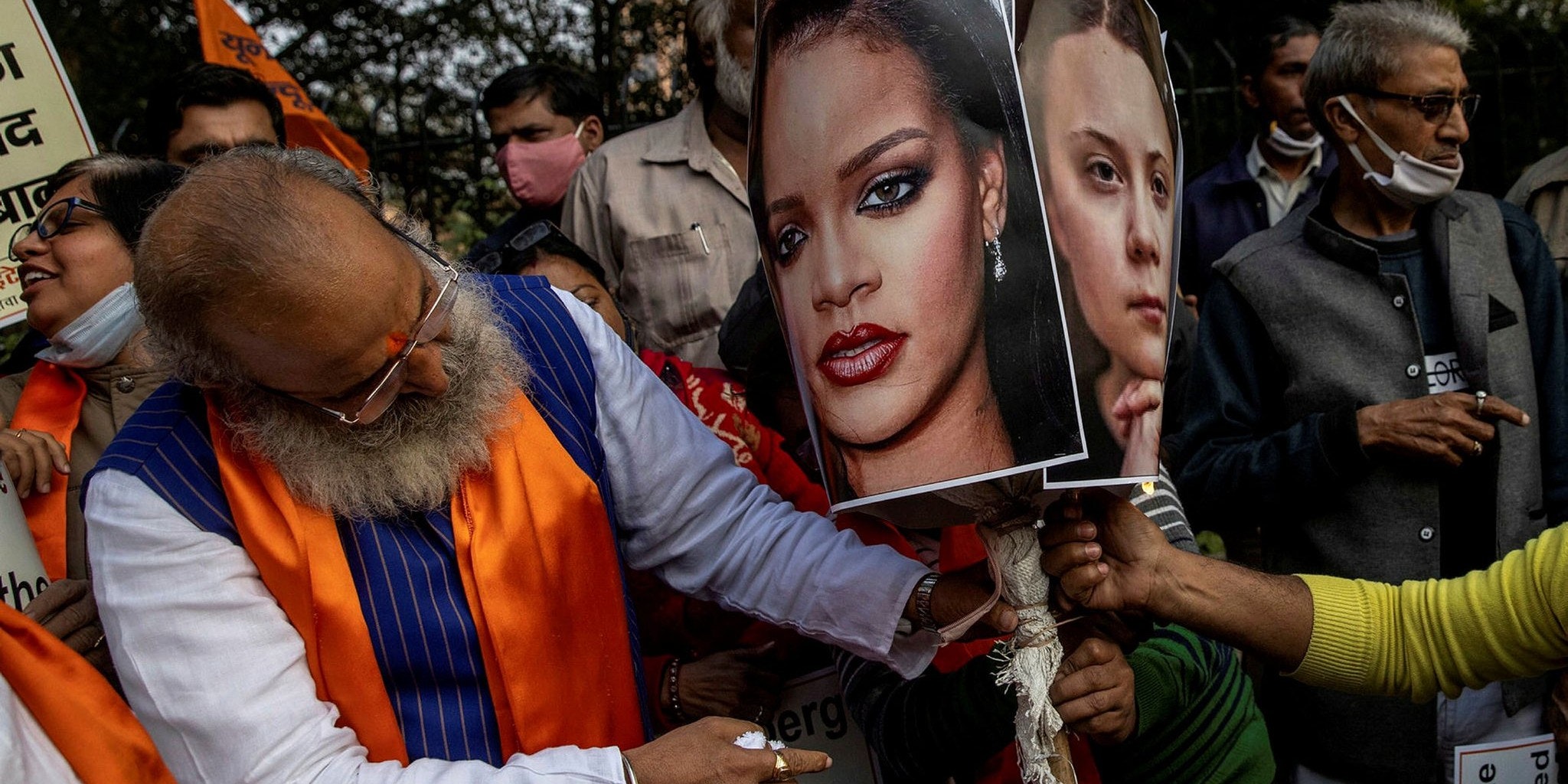 The massive farmers’ protests that have been going on for months in India flared up in the international news this past week following support from celebrities such as Rihanna, Greta Thunberg, and Mia Khalifa. They all received enormous backlash after, and according to lawyer and writer Suchitra Vijayan, there’s one thing that unites them in the way they’re being treated: All of them are women.

Farmers in India have been peacefully demonstrating for months, opposing Prime Minister Narendra Modi’s efforts to lower the government’s involvement in the agricultural sector and leave it at the mercy of private investors to swoop in. This suggestion has agonized the farmers, who worry that this would make them even more unsafe and vulnerable to the private industry’s self-serving interests.

The protests gained momentum on Jan. 26, India’s Republic Day, when the farmers drove their tractors into a historic fort and clashed with police.

Having internationally renowned artists and activists tweet in favor of the farmers brought a level of recognition—and subsequent vitriol—that the protests hadn’t seen before.

Following tweets from Rihanna, Khalifa, and Thunberg, some others who were previously silent broke their silence… against the farmers. And they did it by citing an unsubstantiated, fear-mongering international conspiracy to meddle with India’s business.

He tweeted it with #IndiaAgainstPropaganda on Wednesday, and by the end of the day, the hashtag was trending on Twitter.

“The big media uses what is trending to dictate its newsroom,” lawyer and writer Vijayan told the Daily Dot about how the hashtag spiraled into a much bigger moment in the movement. “The news media doesn’t set the agenda—what’s trending is what often makes it to the news.”

Soon, Tendulkar was joined in by other cricketers and sports personalities in India.

In some ways, it became an attack specifically against any public personalities, such as in response to tweets of solidarity by Meena Harris, the niece of Vice President Kamala Harris, whose mother was from India.

Indian celebrities also used the hashtag to redirect the conversation toward calling for “unity,” with many tiptoeing around calling for actual reform, showing only bare-minimum support for the farmers.

“Farmers constitute an extremely important part of our country,” Bollywood star Akshay Kumar tweeted the same day. “And the efforts being undertaken to resolve their issues are evident. Let’s support an amicable resolution, rather than paying attention to anyone creating differences.”

Meanwhile, Thunberg’s tweet spurred another hashtag among the anti-protesters: #GretaThunbergExposed.

While Thunberg is no stranger to backlash online, these were specifically directed against a “toolkit” she posted in her tweet, which has since led Delhi police to open a case against “unknown persons” linked to the toolkit.

And it soon led to many #GretaThunbergExposed tweets ridiculing her or attempting to vilify her:

The “toolkit,” which was originally shared with a link that Thunberg has since removed, was a mere planning tool for those who were carrying on the movement from around the world: It had plans for upcoming protests, hashtags to use, organizations to tag, organizations and public personalities to reach out to in order to spread the word about the movement.

Anti-protesters began using the “exposed” toolkit to claim that these were plans of “attacks” against India (Thunberg has since shared an “updated toolkit”).

Some spun the hashtag into a way to express support for her and used the opportunity to share what Thunberg actually exposed about the farmers’ crisis.

But what’s key about the backlash that Rihanna, Khalifa, and Thunberg received is the “gendered angle” of it, Vijayan pointed out.

“These women have inhabited these very specific spaces, with very specific political lives and they are being targeted for that, which one has to take into account,” she told the Daily Dot.

“All it took was a tweet from Rihanna for Tendulkar, India’s most famous cricketer [to] have to tweet about the sovereignty of the nation state, and I’m thinking: a tweet broke your nation’s sovereignty? What about these individual figures is so threatening to the state?” she added.

She also pointed out men in leftist spaces, such as Minhaj, didn’t receive any backlash to the same extent as his female counterparts.

By Thursday, the backlash was so strong against both Thunberg and Rihanna that back in India, crowds were burning their effigies.

But some supporters of the farmers’ protest are using the “propaganda” hashtag to either get their message across or to ridicule the lack of nuance portrayed by it in the debate.

Video: Man sticks up Roscoe’s Chicken & Waffles after being turned away for not wearing a mask—he didn’t take money
‘It was so creepy’: TikToker films himself saving teen from man at mall
Advertisement