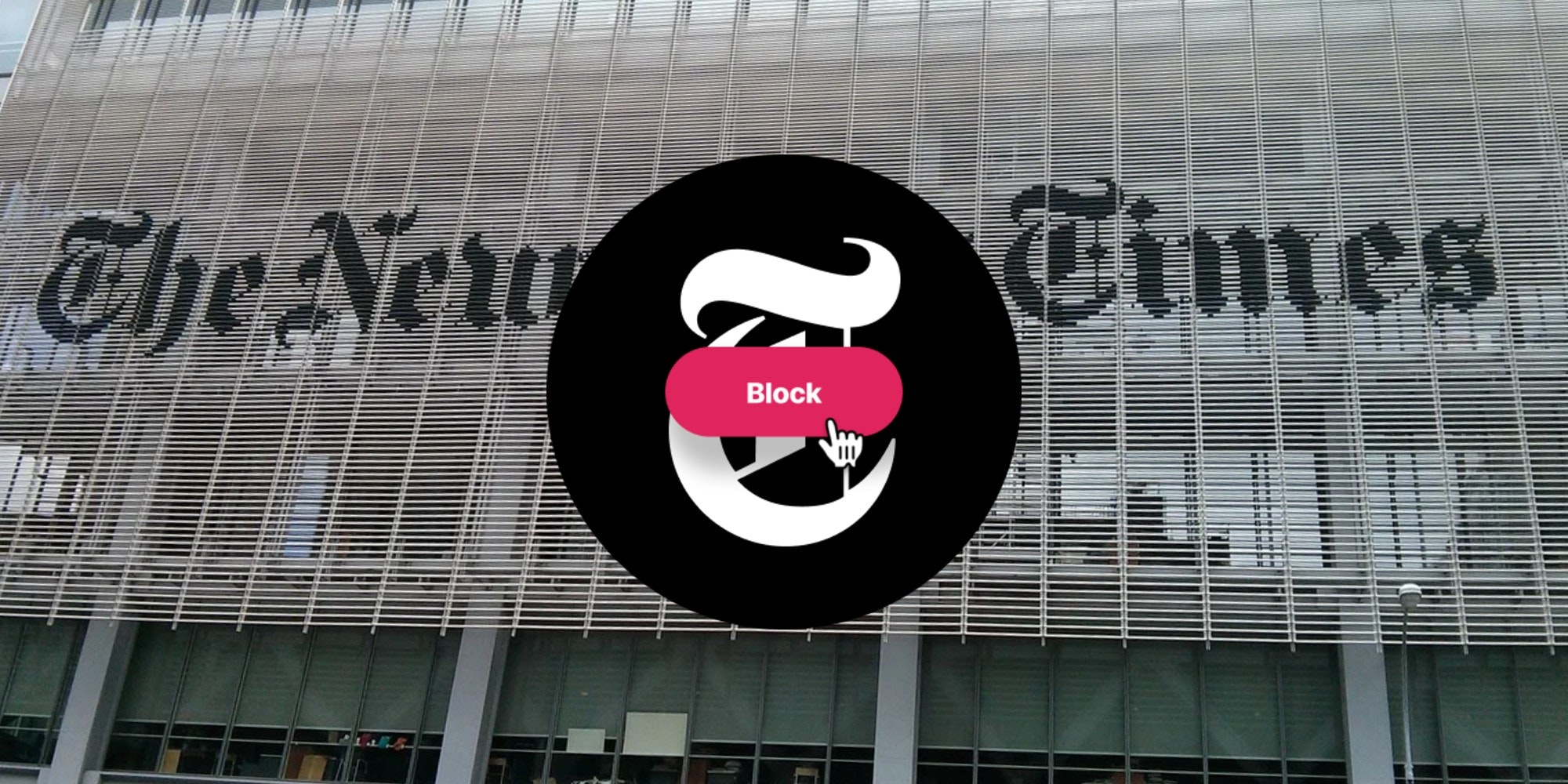 A new app designed to automatically block journalists associated with the New York Times on Twitter is gaining widespread attention from critics of the media.

Launched on Monday, the app, according to its creator “Block the New York Times,” aims to “control the flood of corporate disinformation online” by cutting 800 reporters from your feed with the click of a button.

A corresponding website for the campaign, made to look like the New York Times‘ homepage, contains links to stories regarding retractions from the paper of record as well as other scandals it has faced over the years.

In statements to the Daily Dot, the user behind Block the New York Times outlined a list of sporadic grievances and accused the paper of turning on its employees.

“They careen from crisis to crisis, but most journalists are too afraid to write it up as they would for another powerful corporation that was so badly mismanaged,” they said.

The user repeatedly referenced the Times coverage in the lead up to the Iraq war, specifically regarding allegations surrounding weapons of mass destruction.

“The New York Times Company made money while printing false information that led to the deaths and displacement of millions of Iraqis,” the user said.

Speaking to more recent events, the user then criticized the recent firing of Donald McNeil, a star reporter who was let go after being accused of using racial slurs.

“The Times fired Donald McNeil for the ‘harm’ his comment caused,” the user said. “What harm to innocent people in the Middle East did the Times’ false reporting cause?”

When asked whether they had ever worked in media, the individual behind Block the New York Times again referenced the firing of McNeil but appeared to suggest that they had.

“McNeil fought for a pension for NYT employees and they stabbed him in the back,” they said. “Substack is where we are all going these days.”

“Sulzberger has made countless millions while his journalists have no job security,” they added. “They are walking a tightrope where a single comment can get them fired. They are also too often trying to get other people fired.”

It remains unclear how many downloads the app has received thus far, although the Twitter account for Block the New York Times has garnered more than 3,700 followers.

The list, which can be downloaded as a .CSV file, was put together haphazardly, with a number of journalists who aren’t associated with the Times on it.

Accounts for Vox Media, writers for the New Republic, and freelancers are found on it. However, the bulk of the list does mainly list Times journalists.

After being asked whether the project was run by one person or a group, the account simply referred to itself as “Satoshi Blockamoto,” a reference to the mysterious pseudonym Satoshi Nakamoto used by the creator of bitcoin.

It’s also possible the list isn’t from a former journalist however. Some of its earliest followers were tech entrepreneurs (one of who passed through Y Combinator, a tech incubator).

One of the first places the Block NYT list was posted was to Y Combinator’s news aggregator site. Times‘ reporter Taylor Lorenz was recently in a kerfuffle with some of the biggest names in tech after she mistakenly called out venture capitalist Marc Andressen for using a slur on Clubhouse. That specific incident was cited in the chat on the site.

But it’s much more likely the same far-right media that rushed to share it are similarly behind it. The second person to ever tweet about it was conspiracy theorist Jack Posobiec, claiming, “I have no idea who is behind http://BlockNYT.com but wow wow wow.

Chase Geiser was the first person to ever post about it, and has been retweeting praise for the site. He also frequently tweets at Posobiec. Geiser runs a digital advertising agency but has a link to Gab’s homepage in his Twitter bio. He seems to do PR for Gab, the free speech haven for the far-right, having once responded to a reporter looking to speak about Gab.

His digital agency specializes in web design and social media advertising, the type of company that would be able to put something like this together easily. He’s also responded to people discussing the block list, noting “I just HATES the media.”

He has, however, tweeted at the account as though he did not start it.

So while it’s possible it’s an aggrieved member of the media, or from the tech world, it’s just as likely a PR stunt from people involved with Gab.

The post Is the New York Times block list a stunt from Gab’s PR people? appeared first on The Daily Dot.