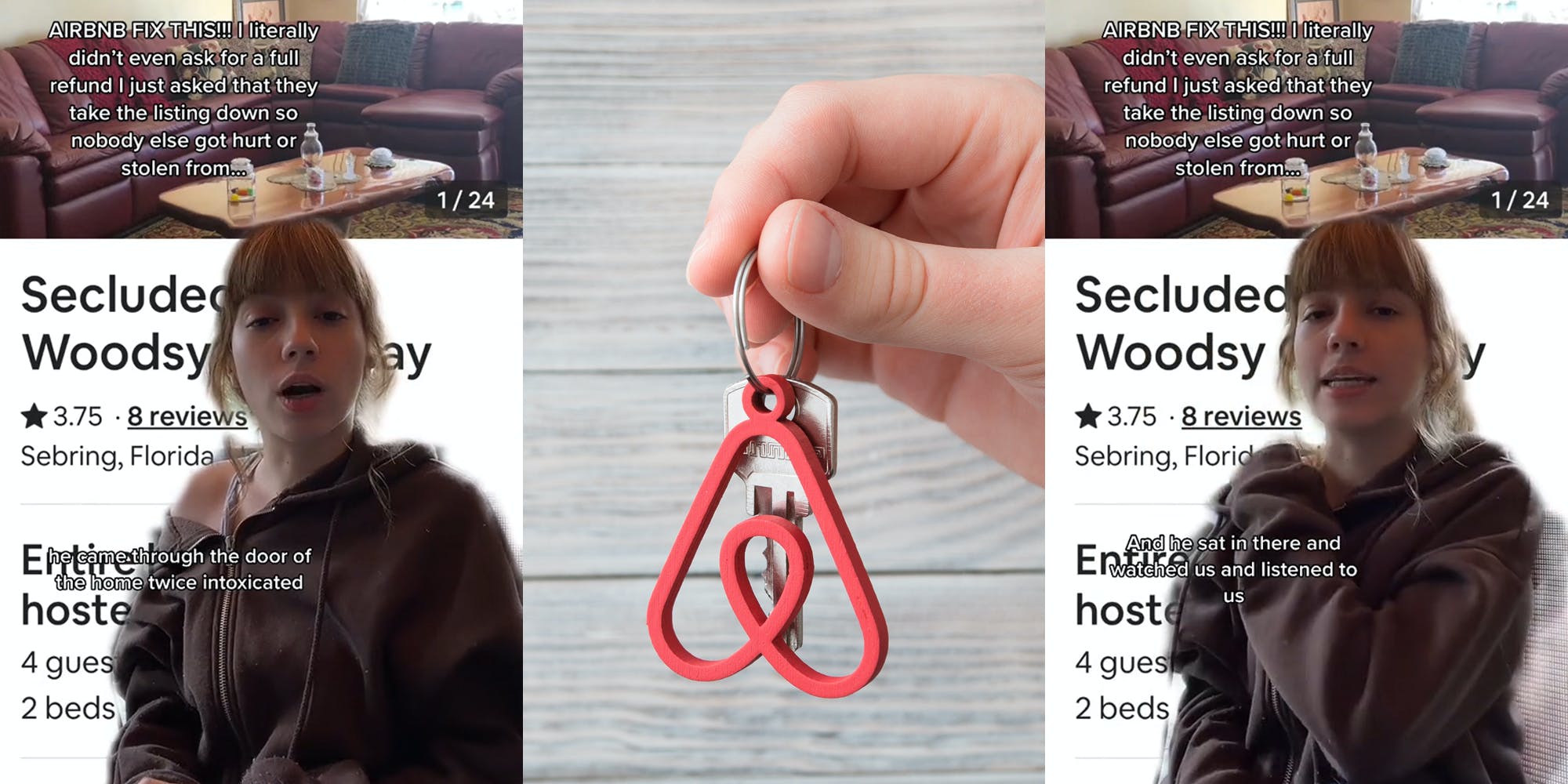 An Airbnb customer has taken to TikTok to call out the company after she alleges she had an “unsafe experience” at a rental she recently booked on the platform. While she attempted to alert Airbnb customer service representatives of the potential dangers future guests may endure at the property, she says her concerns have been largely ignored.

Kitty Goff (@kittyg0ff) explains that she’s held off on discussing her experience publicly for a few months, in hopes that Airbnb would remove the rental listing from its platform.

“I was trying to privately handle it with Airbnb, but they do not give a fuck about people’s safety,” she begins the clip. “And I have to say something because at this point, it’s not getting resolved, and I can’t continue and feel like a good person without telling people.”

@kittyg0ff This was the most unsafe experience ive had with airbnb and honestly I’m so disgusted by how unprofessional airbnb has been ab handling the whole situation…ive been ignored, brushed off, and not taken seriously at all. Just today they asked for my social handles when i told them i was going to take the issue to social media so @airbnb heres my socials and a lil more info: We cancelled our stay 5 days early bc of the simple fact we weren’t safe and I specifically wasn’t safe. My bf and his friend often had to leave for work during the day and staying alone in that house was not an option. 5 different customer service reps have either said they’re “referring me to other departments” or that they could not resolve this issue and closed the case. The fact that this has happened to other ppl that stayed there after us infuriates me. I took a loss on $800 bc all i cared ab was others being safe… and airbnb did nothing. Honestly embarrassing🫠 anyways dont book w Spencer ig #airbnbexperience#fyp#foryou#foryoupage#iykykyk#taurus #greenscreen ♬ original sound – Kitty Goff

Goff says she booked the rental in Sebring, Florida with her boyfriend and his friend, as they were doing work in the area. She says they were unaware that the Airbnb host, Spencer, was also living on the property in an RV.

“It was extremely unsafe,” she claims. “First of all, the Airbnb doesn’t mention, the description doesn’t mention that Spencer, the host, this old ass man, stays on the property in an RV. On top of that, he watches you the entire time.”

She also says Spencer monitored their use of hot water, claiming that he would repeatedly call her immediately after stepping out of the shower to ask her to turn off the hot water.

“Now, you might ask, how did Spencer know you’re done showering?” Goff says, anticipating viewers’ questions. She claims the host had an office inside the property they were renting “that he could access from outside of the house at any time.”

“On the last night that we ended up staying there, he came through the door of the home twice, intoxicated, telling us to close the door,” she says, “when previously at check-in, he had mentioned that he wanted us to keep the door open if we were cooking something.”

Goff says the host first walked up and slammed the door. But the second time, she says he returned to shout at them for leaving the door open, despite his earlier instructions.

Unsurprisingly, Goff and her fellow guests weren’t having the best of experiences at Spencer’s place, so they decided to bail on the duration of their stay.

“We cancel the trip the next morning and leave, cancel the stay because that was just very sketchy and we didn’t like it,” she recalls. “And we were just gonna take the loss on the money or whatever. And then we get all of our stuff in the car, we’re about to pull out of the driveway, my boyfriend realizes, ‘Oh I forgot my wallet.'”

At this point, the TikToker’s boyfriend returned inside to grab his wallet, but she claims Spencer was standing at the door, refusing his re-entry.

“He says, ‘No you can’t come back in you can’t get your wallet. Because my floor is greasy. You didn’t clean my house,'” Goff recalls the host saying.

She then explains that Spencer had admitted earlier to pocketing Airbnb’s $300 cleaning fee, instead expecting the guests to clean the house before departure.

“What the fuck?” Goff exclaims. “Anyways, so I had to call the cops.”

However, she says the police were unable to retrieve his wallet, and they had to file an incident report instead. She also says the situation was made more difficult because they’re from another state.

“We were there working, so we couldn’t just come home,” she explains. “And Airbnb literally won’t do anything about it, and their listing is still up. It’s gotten more reviews from people staying there since for the same shit that’s happened to them. What’s going on?”

Throngs of other TikTokers in the comments section reached out to Airbnb, tagging the company in an attempt to draw attention to Goff’s story. This isn’t the first time Airbnb has come under fire for failing to listen to safety concerns from guests, or users have shared concerning alleged run-ins with hosts.

Airbnb has a host and guest safety policy listed on its website which delineates its policies pertaining to unwanted sexual advances, self-defense, threats or abuse, unsecured or undisclosed weapons, and a variety of other safety concerns.

Goff says that she ultimately ended up taking an $800 loss on the booking and encouraged other users on the platform to avoid booking with Spencer.

“I literally didn’t even ask for a full refund, I just asked that they took the listing down so nobody else got hurt or stolen from,” the TikToker added in the clip’s text overlay.

The Daily Dot has reached out to Kitty via TikTok comment and Airbnb via email for further information.

The post ‘It was extremely unsafe’: Airbnb guest canceled stay early after host allegedly stayed at location, watched them appeared first on The Daily Dot.