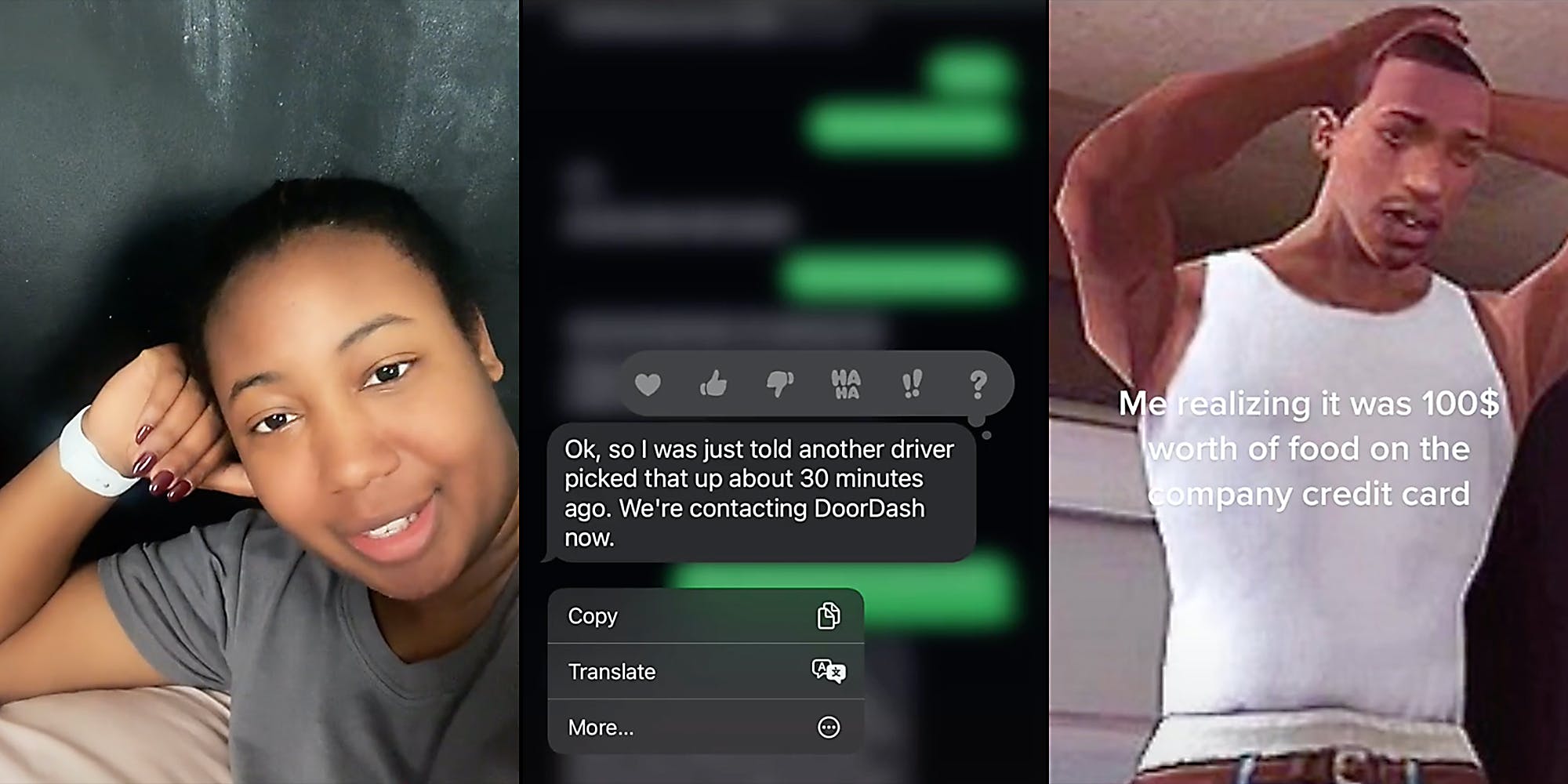 A TikToker alleged in a viral video that a DoorDash driver stole her $100 order.

The TikToker, Abby Elizabeth Marti (@Abbyelizabethmart), shared her story in two videos. She starts off by posting screenshots of the conversation she had with a DoorDash driver in question. She notes via text overlay she ordered food via DoorDash for herself and her co-workers on a company card.

According to the messages, Marti asked for extra ranch, which the dasher, “Bree,” agreed to get more of. “[They’re] close to finishing up your order,” the dasher noted.

Twenty minutes later, however, Marti questioned: “Are they done yet?”

The dasher responded with a simple question mark before questioning: “Is who done with what?”

Marti notes via text overlay that she was “generally confused” by this response since they “were just talking about the order.”

Marti reminded them about the DoorDash order but notes via text overlay that, by this point, she realized she was “bamboozled.”

The driver responded, telling Marti that they just found out another driver “picked up that order 30 minutes ago.”

She also included messages from the second dasher assigned to her order, Scott. Scott said he called the support line on her behalf and was apparently waiting for her food at the restaurant. “I’m sitting here inside the restaurant on hold with DoorDash support, waiting to inform them the driver they dispatched first took the food then unassigned the order and apparently took the order for themselves,” Scott said. “You wouldn’t believe how often this happens.”

Scott also promised to “get to the bottom of this” for Marti.

“Bree, I hope that food was good!” she captioned the video, also including the hashtag “#thanksscott.”

In a follow-up video, Marti says she explained the situation to the restaurant she ordered the food from and that the workers remade her food for her for free. Marti eventually went to the restaurant to collect her order herself, but she lauds Scott for his help in the video.

Marti also clarifies that she left a tip of 20% in response to commenters who claimed a low tip could be a reason why dashers decide to take orders.

Viewers in the comments section shared their similar experiences with DoorDash orders.

“DoorDash is really good at resolving these types of problems and they will deactivate a driver for this,” one person claimed.

“I had a driver who argued with the restaurant that gave my food to someone else for 45 minutes. he got my food and a fattttt tip from me,” another said.

“Doordash is honestly the worst. 95% of the time I never get my order and I get 5 different dashers that all say the first dasher I had took the food,” a third wrote.

Marti told the Daily Dot she did not expect her TikTok to go viral and would like to find Scott “because he was so helpful!”

“I didn’t know that this happens so often!” she said.

She called the situation “frustrating” but said that DoorDash did give the company she works for a refund and that the restaurant, Fried Green Tomatoes in Greenville, South Carolina, remade their food for free. She said she thinks DoorDash “needs to have a better system set up so people and companies are not losing money!”

The Daily Dot reached out to DoorDash via email.

People are imagining themselves at ‘Euphoria High School’ in this new meme
Proud Boys leader Enrique Tarrio accused of snitching on, stealing from the group
Advertisement