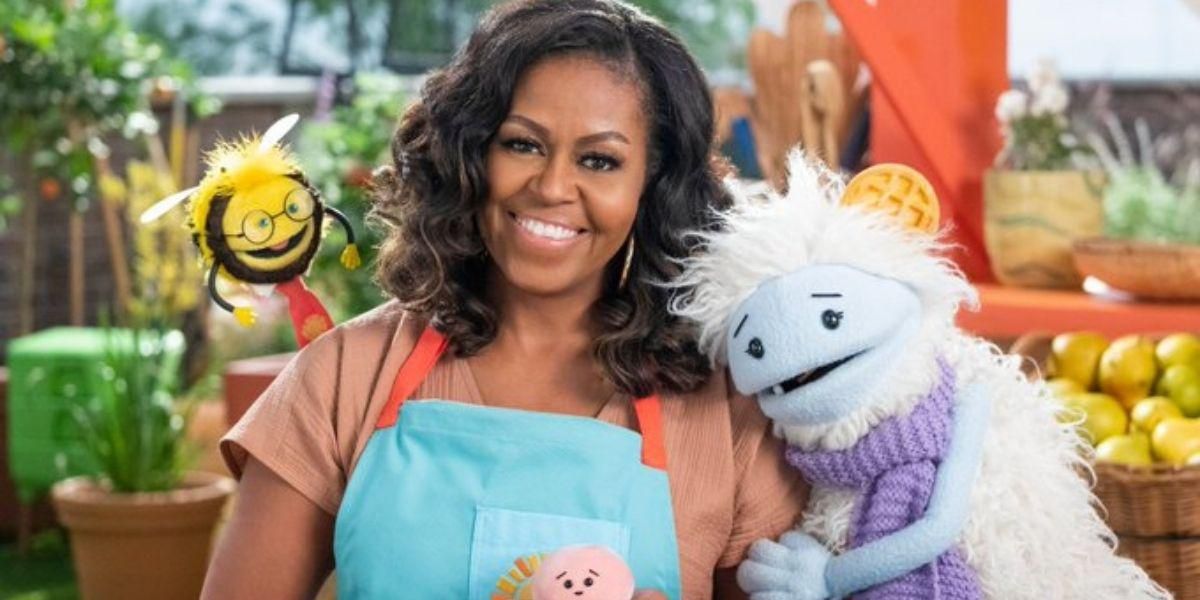 Former first lady Michelle Obama announced this morning that she’s expanding the work she started in the White House to help kids eat better and live healthy lives. On March 16, her new show, “Waffles + Mochi,” will debut on Netflix on March 16.

Obama described the premise of the show on Facebook:

“I’ve got some big news for you! This is something I’ve been working on for a while now, and I’m so excited to finally be able to tell you all about it. Allow me to introduce two new friends of mine: Their names are Waffles and Mochi. And on March 16, we’ll be launching a new children’s show on Netflix called Waffles + Mochi. It’s all about good food: discovering it, cooking it, and of course, eating it. These two will take us on adventures all around the world to explore new ingredients and try out new recipes. Kids will love it, but I know that adults will also get plenty of laughs—and some tips for the kitchen.

In many ways, this show is an extension of my work to support children’s health as First Lady—and to be quite honest, I wish a program like this had been around when my girls were young. I also know that this is a difficult time for so many families, and I’m hopeful that this delightful show can bring a bit of light and laughter to homes around the world. That’s why as part of the show’s commitment to helping families during the pandemic, we’re working with our partners at Partnership for a Healthier America to get fresh ingredients to families in need across the country so they can cook together at home.

So that’s what #WafflesAndMochi is all about. I can’t wait for you and your children to join us on our adventures on March 16.

More details about the show were shared by Strong Black Lead on Twitter. Waffles and Mochi are aspiring young chefs who will travel to kitchens, restaurants, farms, and home around the globe to explore recipes and ingredients from different cultures.

“Whether they’re picking potatoes in the Andes of Peru, sampling spices in Italy, or making Miso in Japan, these curious explorers uncover the wonder of food and discover every meal is a chance to make new friends,” they wrote.

Whether they’re picking potatoes in the Andes of Peru, sampling spices in Italy, or making Miso in Japan, these cur… https://t.co/oMUpYsyEY5

Obama made kids’ health her primary focus as First Lady with her “Let’s Move” campaign and her push to get fresh, healthy food into school lunches. And according to a study released last summer, her initiative made a difference. Researchers at the University of Washington assessed how the 2010 Healthy, Hunger-Free Kids Act that Obama championed impacted the nutritional quality of school meals that kids actually ate (as opposed to just looking at the food served).

“The evidence suggests that the policy resulted in improved nutritional quality of lunches consumed by students who participate in the National School Lunch Program,” said senior study author Jessica Jones-Smith, an associate professor of health services and epidemiology at the UW School of Public Health.

Since improved nutrition standards for school meals were put into action across the United States in 2012, children – especially those from low-income households – have been eating healthier school lunches with better overall nutritional quality, a new study published July 28 in JAMA found.

The researchers, from the University of Washington School of Public Health, did not find the same positive changes in dietary quality among children who did not take part in the National School Lunch Program.

This is the first nationally representative study to assess specifically how the 2010 Healthy, Hunger-Free Kids Act – championed by former first lady Michelle Obama and signed into law by former President Barack Obama – impacted the overall nutritional quality of school meals eaten by students, rather than meals served.

“The evidence suggests that the policy resulted in improved nutritional quality of lunches consumed by students who participate in the National School Lunch Program,” said senior study author Jessica Jones-Smith, an associate professor of health services and epidemiology at the UW School of Public Health.