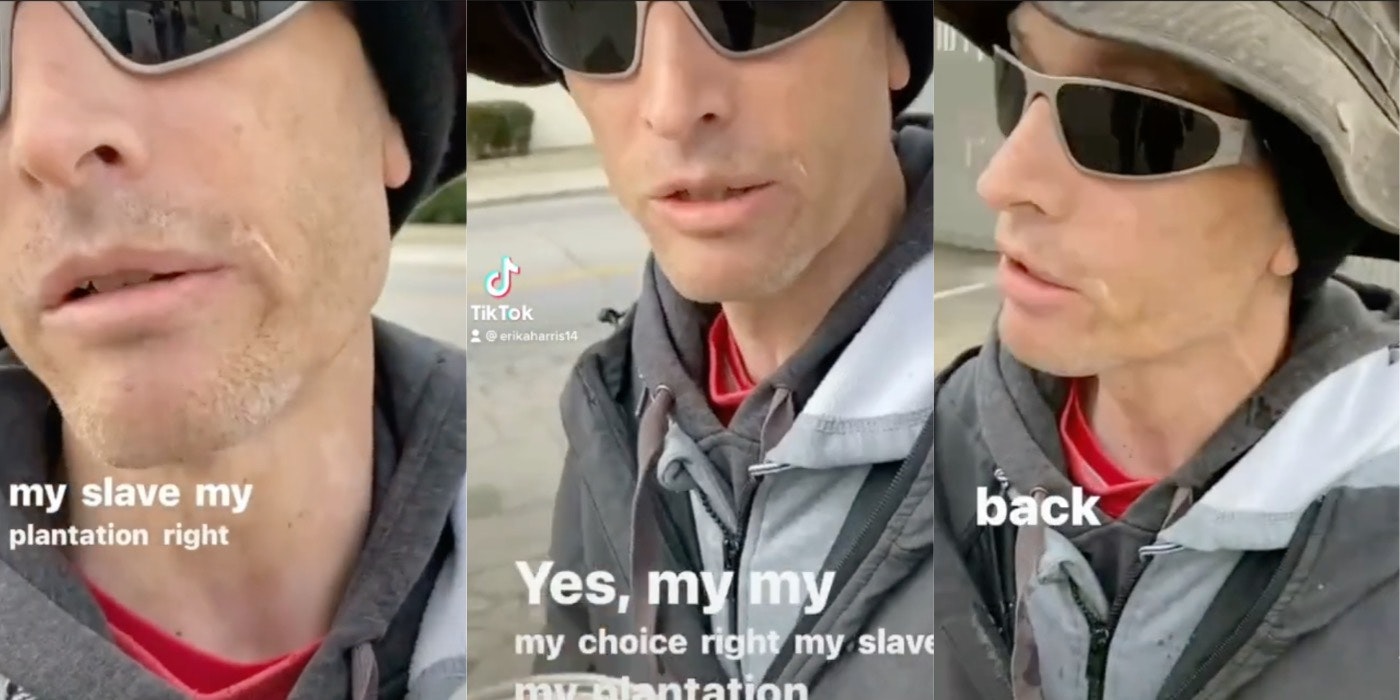 A TikTok video that was trending on Tuesday shows a racist protester comparing support for the right to an abortion to owning slaves.

The TikTok, which was shared by user @Erickaharris_14 and deleted by Tuesday afternoon, shows the area outside of a women’s health clinic in Bakersfield, California. The person filming talks to pro-life protesters who are trying to stop women from going to their appointments.

“My slave, my choice, right?” says one man. He appears to be referring to the pro-choice slogan “my body, my choice.” “My slave, my plantation,” the man says. “Same concept, right?”

The man ramps up the racism: “Bring back chattel slavery,” he says. “My body, my plantation … It would be my slave, my plantation, right?” He then tries to snatch a pro-choice sign from a counterprotester.

The man and the person filming then argue about who started what, and the camera pans to briefly show the protester’s license plate.

A video previously posted by @erikaharris14 shows the same protester wearing a bucket hat and sunglasses and reading passages from a religious book.

It’s not the first time that the right to an abortion has been compared nonsensically to own slaves. Betsy DeVos, former education secretary under Donald Trump, said Abraham Lincoln dealt with a similar situation.

“He, too, contended with the ‘pro-choice’ arguments of his day,” DeVos said in January 2020, according to Politico. “They suggested that a state’s ‘choice’ to be slave or to be free had no moral question in it.”

Evangelical Christians became associated with the anti-abortion movement in the U.S. in the aftermath of Roe v. Wade, the landmark Supreme Court decision that upheld women’s constitutional right to choose to have an abortion. But as Kelly Macías wrote for BlackHer, religious conservatives had previously been preoccupied with upholding segregation.

“While Evangelicals want to be free to discriminate based on race, without government interference, they also want to preserve a white world in which white babies outnumber people of color, Black people in particular,” Macías wrote.

The post ‘My slave, my choice’: TikTok shows anti-abortion protester going on racist rant appeared first on The Daily Dot.