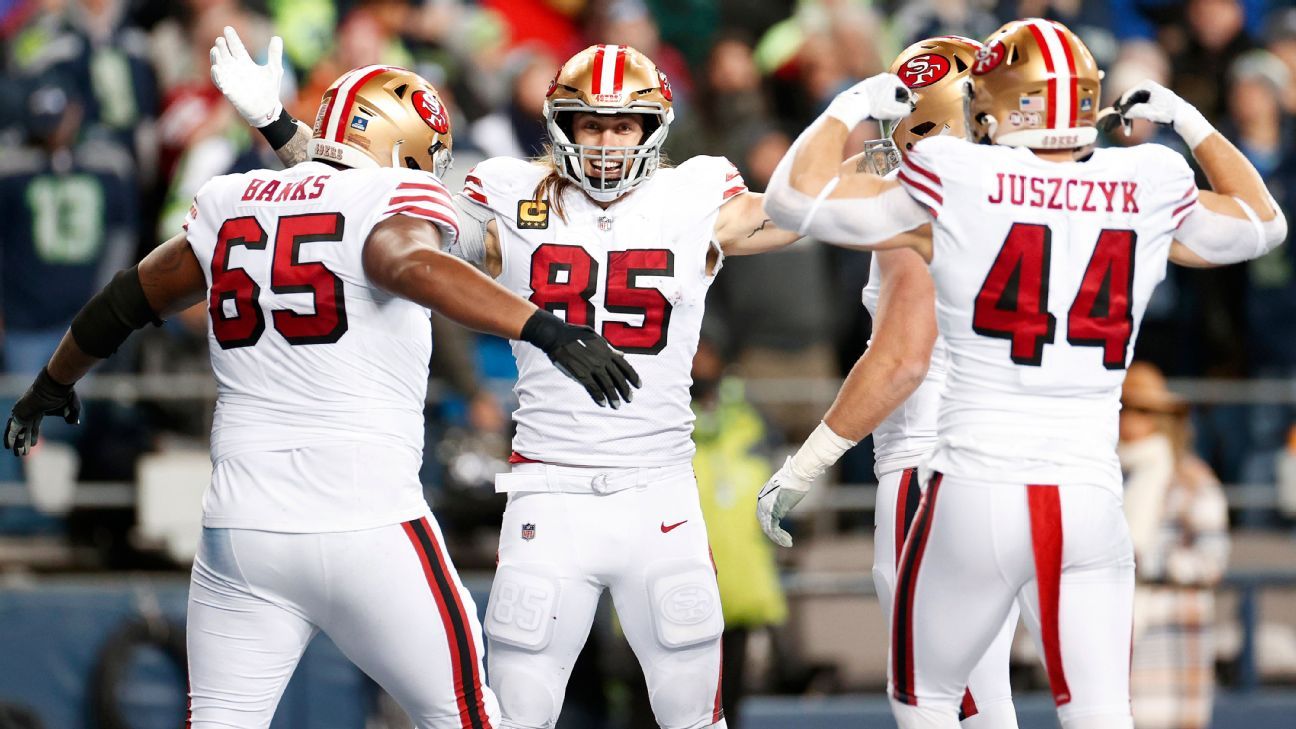 SEATTLE — With a couple of exceptions, nobody on the San Francisco 49ers knows better than defensive lineman Arik Armstead just how hard it is to beat the Seattle Seahawks at Lumen Field.

For all of Armstead’s eight years in the NFL, he’s been part of a team that has come to Seattle and left with a disappointing loss. There was only one notable exception, in 2019, when the Niners beat the Seahawks in a thriller to clinch the NFC West division and the NFC’s No. 1 seed.

After Thursday night, there are now two notable exceptions, as the Niners jumped on the Seahawks early and held on for a 21-13 win. And, for the second time in four seasons, the Niners were able to enjoy a T-shirt-and-hat celebration in the stadium of their biggest nemesis.

“I’ve only done it twice in my eight years so that shows you how hard it is,” Armstead said. “And to do it against Seattle, we wouldn’t want it any other way. A team that has been a thorn in our side ever since I’ve been here. So, to get it done against them definitely felt great.”

Just like in 2019, the 49ers claimed the division crown on Seattle’s home field, and, with three games to play, it’s the earliest they’ve wrapped up the division since 2011. Perhaps not coincidentally, it’s also the first time San Francisco has swept the Seahawks since that 2011 season.

With the win, the Niners improved to 10-4 and claimed their seventh straight victory, their longest winning streak since an eight-game tear in 2019. The victory ensures they can finish no lower than the No. 3 seed in the NFC playoffs.

The 49ers close out the season with a home game against the Washington Commanders on Christmas Eve, a visit to the Las Vegas Raiders on New Year’s Day and by hosting the Arizona Cardinals in the season finale.

Although San Francisco has been injury-plagued and could use the down time to get healthy, it can still realistically catch the 10-3 Minnesota Vikings for the No. 2 seed.

“This isn’t our final goal by any means,” coach Kyle Shanahan said. “I’m very proud of our team and what we accomplished throughout the year to get to this. Our goal is to get into the tournament and we accomplished that today but now it’s all trying to set that up to be the best situation we can and hopefully get some of our guys back too in the process.”

At the top of the “needs to heal” list is rookie quarterback Brock Purdy. On a short week after suffering a rib and oblique issue on Sunday against the Tampa Bay Buccaneers, Purdy didn’t so much as attempt a single pass in practice this week.

In fact, the only throwing he did before pregame warmups Thursday night was at a hotel ballroom during the team’s day-of-game walkthrough in Seattle. Even during warmups, Shanahan believed there was a chance Purdy might not play or, at minimum, be able to finish the game. Veteran quarterback Josh Johnson was on stand-by.

But Purdy, the 262nd and final pick in the 2022 NFL draft, said he never doubted he’d play against the Seahawks.

“I knew I was gonna come out to start the game off and just try to get into a rhythm and see how my oblique and all that kind of stuff felt,” Purdy said. “And then make a decision. But my mindset was, ‘Man, I’m coming into this place to play and to start.'”

Purdy not only finished the game but put together another strong, mistake-free outing. Aside from a throw that should have been intercepted just before half, Purdy never put the ball in harm’s way, finishing with no interceptions and two touchdowns while completing 17 of 26 passes for 217 yards for a passer rating of 117.0.

Two starts into his young NFL career, Purdy has completed 70% of his attempts with four touchdowns and no interceptions, making him just the third quarterback — along with Aaron Rodgers and Jimmy Garoppolo — since 1950 to hit those marks in his first two starts.

Purdy even flashed his speed and poise with a late third-down scramble that helped ice the game.

“It was another level for me just watching someone do it,” Shanahan said. “The injury he had last week and for him to be ready to go today, which you still could tell in pregame warmups a number of things that were really tough for him, and for him to be able to just play, let alone the way he did, to protect the ball, he struggled to move a little bit at times. … Our team had a lot of respect for him before the game but a lot more now.”

Purdy also got plenty of help as tight end George Kittle finished with four catches for 93 yards and a pair of touchdowns, the Niners’ defense held a seventh straight opponent to 17 points or fewer and running back Christian McCaffrey did his usual heavy lifting.

McCaffrey finished with 32 touches for 138 yards from scrimmage and had a rushing touchdown. It was his fifth game with 100-plus scrimmage yards, making him the second midseason acquisition to hit that number, joining Eric Dickerson, who had six in 1987 for the Indianapolis Colts, according to Elias Sports Bureau.

It’s no coincidence the 49ers are 7-0 since McCaffrey stepped into a full-time starter role in Week 8. Before that, San Francisco was averaging 20.7 points per game. Since, the Niners have averaged 27.6 points per game.

It was less than two months ago that the Carolina Panthers traded McCaffrey to the 49ers for future draft picks. McCaffrey went from a struggling NFC South team to the NFC West champions.

“It’s hard to put into words,” McCaffrey said. “It’s been a wild roller coaster and obviously we still have a lot more left. But it’s nice to be able to celebrate this one with an amazing group of guys, and I’m just so fortunate to be a part of this team.”