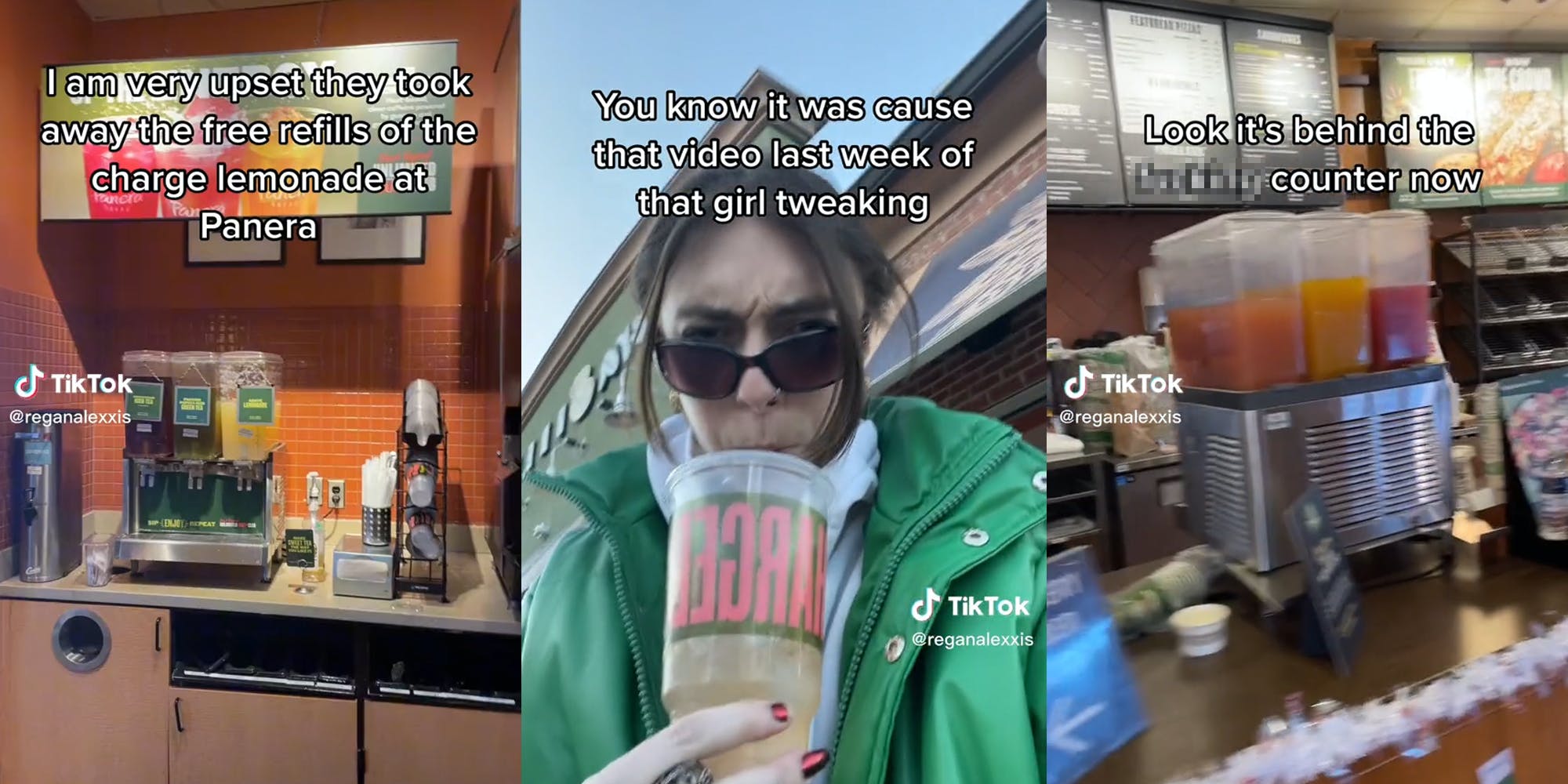 Last week, TikTok user Sarah (@sarahebaus) went viral and caused a stir after revealing that she had inadvertently consumed over 1,000 mg of caffeine in one day thanks to Panera Bread’s Charged Lemonades.

For context, the Food and Drug Administration says that one should not consume more than 400 mg of caffeine per day. A large Charged Lemonade from Panera has 390 mg of caffeine, per the company’s website.

Now, another user on TikTok is claiming that Sarah’s video has led to a change in the store’s layout.

Previously, a customer who purchased a Charged Lemonade was allowed to refill it by themselves. But according to TikTok user Régan (@reganalexxis) in a video with over 754,000 views, that appears to no longer be the case.

@reganalexxis no more free refills of charged lemonade at panera. @sarahebaus your influence was too strong 😔 260 mg of caffeine in ONE of these babies. truly has u feeling like the hulk. only a matter of time before they take it off the menu better try it QUICK #chargedlemonade #paneralemonade #freerefills #hulksmash #caffeinerush ♬ original sound – régan alexxis

“I am very upset they took away the free refills of the Charged Lemonade at Panera,” says Régan. “Look, it’s behind the fucking counter now.”

“You know it was [because] of that video last week of that girl tweaking,” she concludes, referencing Sarah’s video.

According to commenters, the movement of the Charged Lemonade dispenser to behind the counter is not yet universal. Machines in some locations remain available for refills.

“I work at a panera and ours is still in the lobby, y’all go to corporate stores or something,” wrote one user.

“I work at Panera! ours is still completely normal! source: I cleaned the machines in the lobby like three hours ago,” stated another.

However, machines in other locations appear to have been moved behind the bar, where customers must ask for refills instead of being able to do it themselves.

“My local panera did the same – I’m livid,” shared a user.

“Ours has been behind the counter for at least 6 months now,” alleged a second.

The actual reasoning for this move is unclear. While Régan speculated that the move was due to Sarah’s viral video, others claim that there were more practical reasons for the switch.

“I was told in my location it was because kids would pick them out without parents knowing how much caffeine they had,” said a commenter.

“It’s not taking away the free refills, it’s because people come in and steal cups and steal the charged lemonades,” offered an additional TikToker. “I work at Panera lol.”

“See I work there it’s just because people were fr asking for water cups and getting the charged lemonade,” echoed a further user.

Still, some users are concerned that this may be a sign that Panera is considering doing away with the Charged Lemonade for good.

As Régan writes in the video’s caption, “only a matter of time before they take it off the menu better try it QUICK.”

The Daily Dot reached out to both Régan and Panera via email.

The post ‘Only a matter of time before they take it off the menu’: Panera customer claims chain is moving Charged Lemonades behind the counter appeared first on The Daily Dot.

What was the best meme of the year?
Elon Musk loses his own Twitter poll asking if he should step down as ‘head of Twitter’
Advertisement