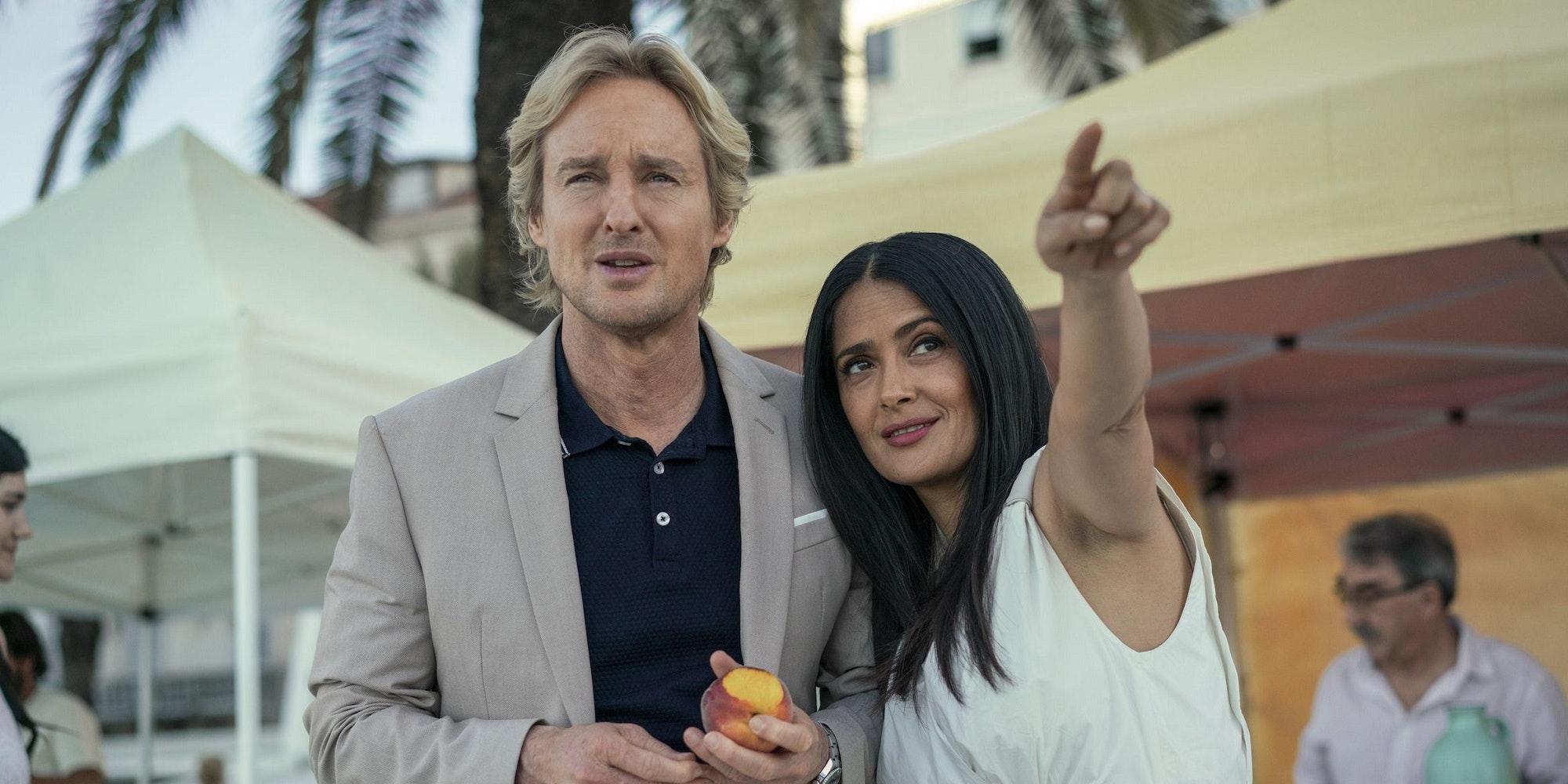 There’s a fine line between ripoff and homage, as proven by the central conceit of Bliss. Like Neo in The Matrix, we meet Greg (Owen Wilson) as a miserable office drone, filmed in greyscale tones. And like Neo, his life is turned upside down when he meets a mysterious woman (Isabel, played by Salma Hayek) who informs him that the “real world” is a computer simulation—a simulation he can only recognize and escape if he takes a magic pill.

RELEASE DATE: Feb. 5, 2020
DIRECTOR: Mike Cahill
STREAMING: Amazon Prime
In this downbeat riff on ‘The Matrix’, a middle-aged man (Owen Wilson) finds out that his life may be a computer simulation and goes on a mind-bending journey of discovery with a mysterious, pill-popping woman (Salma Hayek).

Stylistically speaking, Bliss and The Matrix couldn’t be more different. Writer/director Mike Cahill (Another Earth) isn’t interested in action, focusing more on ethical and philosophical questions. In Bliss, Greg is torn between two worlds, leaving viewers to question which is real—and more to the point, which is more deserving of his attention. This kind of debate was a hot topic at college parties during the post-Matrix years: What if the real world really is a computer program, man? And how would you react if it was?

For Neo, the answer was never ambiguous. He was excited to embark on a new life as a cyberpunk messiah, and The Matrix largely functions as an action/adventure story with plenty of visual panache. Meanwhile, Bliss feels more like a second-rate Twilight Zone episode. An interesting thought experiment, but rather corny in execution. In movies where the main character questions their reality (Inception, Donnie Darko), the trick is to tell a story that thrives independently from the question hanging over the protagonist’s head. Bliss tries to keep us guessing for too long, and the worldbuilding isn’t tight enough for that mystery to feel satisfying.

It’s hard to discuss Bliss without going into spoilers, since the central idea is only revealed about halfway through. But if the trailers can blithely introduce the film’s dueling realities, then I’m happy to go ahead. Basically, after living an entire life in the capitalist hellscape we call home, Greg wakes up to discover that the “real” world is a futuristic utopia. He and Isabel actually live in a sunlit Mediterranean villa, and that miserable simulated world only exists to give people perspective. It’s a rather clumsy twist on the old “can money buy happiness?” question, because the answer is obviously yes. Greg is happier living in a beautiful house with no meaningful stressors, instead of being a divorced deadbeat dad who works in a call center. The problem is the simulation is too realistic. He misses his daughter, who is—according to Isabel—a completely fictional entity.

Bliss suffers from having too much going on at once. In addition to being a philosophical sci-fi drama, it’s also a drug movie that barely skims the surface of real-life opioid addiction. You see, from the perspective of Greg’s daughter Emily (Nesta Cooper), he’s gone on a bender after picking up a pill habit and moving in with Isabel, who lives off-grid beneath a highway bridge. Salma Hayek’s aggressively wacky performance falls somewhere between a mid-2000s Manic Pixie Dream Girl archetype and a mentally ill person who accosts people in the street to share their conspiracy theories. This doesn’t really work in context, because director Mike Cahill mostly opts for a downbeat tone, with Owen Wilson as a rather passive type of protagonist.

We’re used to seeing romances where a zany, charismatic character pulls an unhappy love-interest out of their shell, but Bliss never settles on a solid foundation for Greg and Isabel’s relationship. Is she his mentor, guiding him through a bizarre philosophical awakening? Are they in love? Is she a self-serving manipulator? All three are true in one way or another, but the chemistry and the characterization just aren’t coherent enough to back it up. Despite its A-list leads, Bliss just isn’t smart enough to attract serious sci-fi fans, or fun enough to be simple crowd-pleasing entertainment.

The post Owen Wilson is trapped in a simulation in Amazon’s new sci-fi movie ‘Bliss’ appeared first on The Daily Dot.