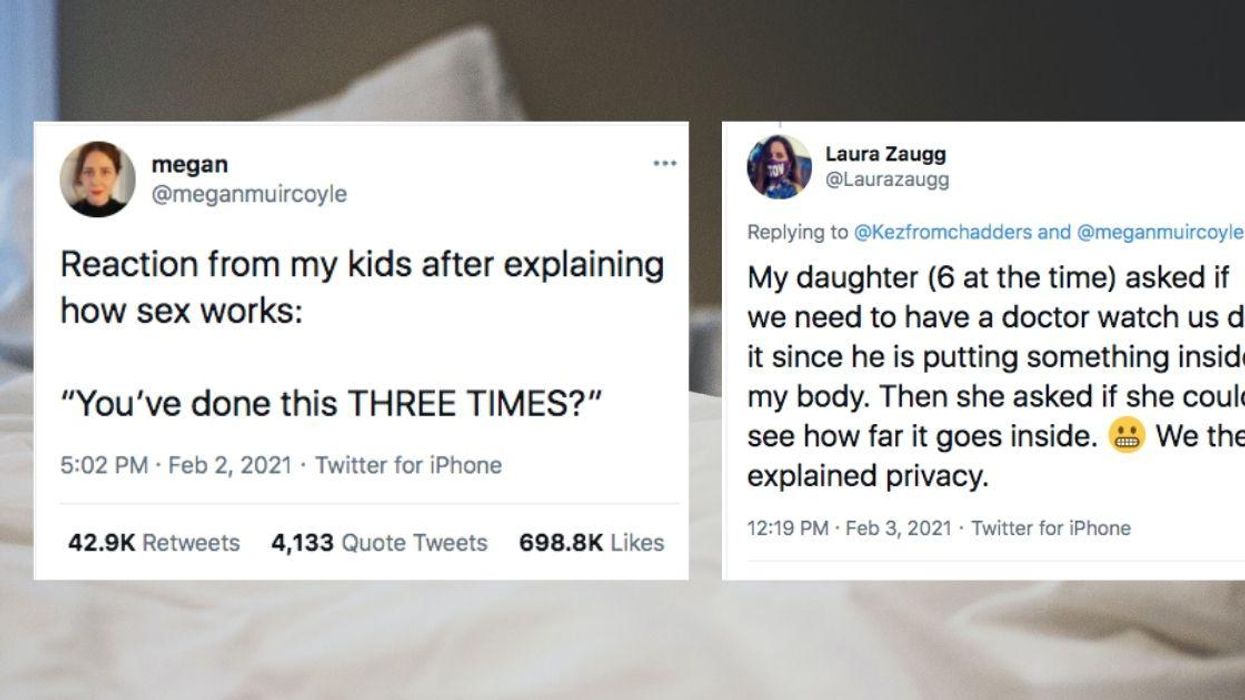 One of the greatest parenting milestones is the day you get to explain to your children the basics of sex. Sometimes that day arrives because a kid bluntly asks how babies are made, sometimes parents bring it up so their kids to hear it from them before they hear it from other people, and sometimes it’s a result of an unexpected encounter (like a kid walking in on their parents doing the deed).

However you arrive at it, that initial conversation is always interesting. No matter how prepared you think you are, some awkward hilarity is inevitable as you navigate those new waters. Sex is pretty simple on the one hand, but quite complicated on the other, and figuring what details to share at what stage is a tricky balancing act.

Some kids are open and curious and ask a million questions. Some kids are quiet and reserved and process it all in their own sweet time. But the first reaction of most pre-pubescent kids when they first hear about the mechanics of sex, even if you introduce it in a sex-positive way, is something along the lines of “What?? Are you serious? EW.” And when they connect the dots that their parents had sex in order for them to be alive, the reaction gets even funnier.

A thread on Twitter illustrates how true this is as parents share their children’s reactions to hearing about the birds and the bees.

Reaction from my kids after explaining how sex works: “You’ve done this THREE TIMES?”

Some kids let questions slip out before thinking about whether they really want to know the answer. Once you know it, you can’t unknow it. Sorry, kiddo.

@meganmuircoyle On a summer walk my 1 boy(9) was asking ? about sex & I explained everything. My husband was away f… https://t.co/0hHQQxUFgt

Parents have to be prepared for awkward questions, but sometimes you really can’t predict what a kid might want to know. Kids aren’t exactly known for having boundaries, and that’s doubly true for a topic that’s totally new for them.

@Kezfromchadders @meganmuircoyle My daughter (6 at the time) asked if we need to have a doctor watch us do it since… https://t.co/JA5Dfy2BbA

@AnnieTook @meganmuircoyle I remember asking my mom how you’d know “ when you inseminated a woman”. I was like 9 an… https://t.co/g11TnU7zBv

Most of us don’t like to imagine our parents having sex, so this is one area where kids who are adopted have somewhat of an advantage (until they learn that procreation isn’t the only reason people have sex).

@meganmuircoyle My kids are adopted, and I once heard, “Well, at least you guys didn’t have to do THAT!”

It’s not just the questions, but the declarations that come along with kids learning about sex that can take parents by surprise.

@meganmuircoyle My kid learned about it in the backseat at Target in a spur of the moment conversation. We got home… https://t.co/aqRtY79sEP

@meganmuircoyle @bames_jrolin My nephew was about 7 when he got this info. At the next big holiday dinner he sponta… https://t.co/S7Fl4RNZcC

It’s always entertaining to see a kid’s understanding move from innocence to reality.

@meganmuircoyle when he got older I told him about the cervix, contractions, labour etc and he was like “oh. okay.… https://t.co/u7mnCiVYUg

And even more entertaining when you realize that you were the one who inadvertently introduced your kid to a sexual concept you may not have been prepared to discuss.

@fitz_lorie @meganmuircoyle @JoJoFromJerz I asked my mom the same question around the same age. She wanted to know… https://t.co/GT1G1MaL46

And then there are the unintentional misunderstandings that occur when kids don’t get quite enough information.

Perhaps the funniest part about talking about sex with kids is how actually kind of weird the physical act really is when you think about it. Of course it seems absurd to children who haven’t sexually developed yet.

In fact, some kids find it so weird, they literally don’t believe it.

@KathlynClore @meganmuircoyle I used to think that people got pregnant by kissing, the baby would grow and eat in y… https://t.co/7JXLHhXwLA

Like, what the heck with this design? And they don’t even know at this point about the nitty-gritty details that you only really know once you’ve done it.

As funny as these stories are, the fact that parents are having open and honest conversations with their kids about sex is seriously awesome. Some people do their kids a disservice by being too creeped out to talk about it, or maybe worrying they’ll give too much info, so they don’t talk about it.

@meganmuircoyle I was lucky, when I was like 5 I asked my mom where babies came from and she explained it, and told… https://t.co/X27PUnHPgE

Whatever your moral perspectives on the topic, sex is part of life. It’s basic health and biology. It’s a human reality that everyone learns about one way or another, and it’s generally better for kids to learn about sex from their parents than from their peers, who might give wrong information. Starting early by answering kids’ questions matter-of-factly, giving age-appropriate details (which admittedly can be hard to discern), and bringing up the topic occasionally if your kids don’t can help kids ease into a healthy understanding of sex.

While the basic mechanics conversation is indeed a parenting milestone, the best parent-child conversations about sex are ongoing and ever-expanding. Making consent and boundaries part of the conversation is vital as well. Some uncomfortable moments may be inevitable, but keep the line of communication wide open will go a long way toward helping kids prepare for what’s to come.