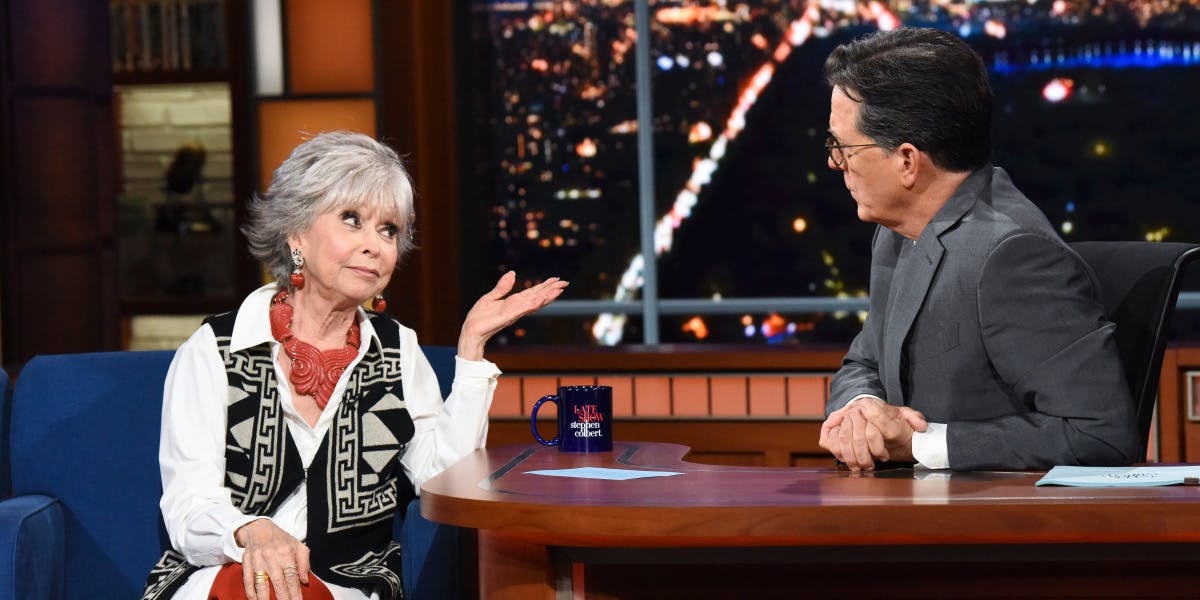 The theatrical release of In the Heights has led to bigger conversations around colorism and the lack of Afro-Latinx representation within Latinx stories and even garnered an apology from Lin-Manuel Miranda. But at least one person is defending Miranda, a move that instantly drew both backlash from viewers and highlighted huge issues with the movie that made her a star.

Rita Moreno appeared on The Late Show to promote a documentary about her life that is currently screening as part of the Tribeca Festival. But as Moreno referenced the 100% rating on Rotten Tomatoes for Rita Moreno: Just a Girl Who Decided to Go for It to Stephen Colbert, a fact she was proud of, she also wanted to discuss the criticism surrounding Miranda (who she considers a friend and was an executive producer on her documentary), noting that it “really upsets me.”

“It’s like, you can never do right, it seems. This is the man who literally has brought Latino-ness and Puerto Rican-ness to America. I couldn’t do it. I would love to say I did, but I couldn’t. Lin-Manuel has done that really single handedly, and I’m thrilled to pieces, and I’m proud that he produced my documentary.”

Colbert followed up by asking whether Moreno felt that while people’s criticism of colorism was valid, the criticism around Miranda himself was misplaced.

“Well, I’m simply saying, can’t you just wait a while and leave it alone?” she continued. “There’s a lot of people who are Puertorriqueño, who are also from Guatemala, who are dark and who are also fair. We are all colors in Puerto Rico. And this is how it is. It would be so nice if they hadn’t come up with that and left it alone just for now. They’re really attacking the wrong person.”

Instead of following up, Colbert pivoted to ending the interview.

Moreno’s comments instantly drew ire from viewers and fans alike who pointed out how similar her comments telling Afro-Latinx viewers to wait their turn to see themselves represented on-screen were to what many white people say to people of color when concerns about inclusion arise.

Some people even pointed out how Colbert even gave her an out with his question that asked if she thought only the criticism about Miranda was misguided before she doubled down.

And others brought up the irony of Moreno defending Miranda and In the Heights for colorism when Moreno and several other actors were put in brownface to play Puerto Rican characters in West Side Story, which nabbed Moreno and Oscar and helped launch her career.

Moreno herself has criticized the use of brownface for the Puerto Rican characters in the original West Side Story. A 2017 interview with the In the Thick podcast even revealed that the makeup artist asked her if she was racist when she mentioned Puerto Rico’s diversity.

“We all had the same color makeup, it was a very different time,” she said, according to HuffPost. “I remember saying to the makeup man one day ― because it was like putting mud on my face, it was really dark and I’m a fairly fair Hispanic― and I said to the makeup man one day ‘My God! Why do we all have to be the same color? Puerto Ricans are French and Spanish…’ And it’s true, we are very many different colors, we’re Taino Indian, we are Black some of us.”

While some people were criticizing Miranda himself and Moreno felt that those attacks were off-base, the conversations around colorism are much bigger than him or In the Heights. There’s a narrow image in parts of the entertainment industry of what a Latinx actor looks like and Afro-Latinx actors—especially dark-skinned actors—are rarely given the chance to play Latinx characters. (Or they’re relegated to background characters while lighter-skinned Latinx actors are given major roles.)

“I can hear the hurt and frustration over colorism, of feeling still unseen in the feedback,” Miranda wrote in his apology posted on Monday. “I hear that without sufficient dark-skinned Afro-Latino representation, the work feels extractive of the community we wanted so much to represent with pride and joy. In trying to paint a mosaic of this community, we fell short.”

The post People aren’t happy with Rita Moreno for her defense of Lin-Manuel Miranda appeared first on The Daily Dot.

‘Bet they won’t do that sh*t again’: TikTok shows girl getting decked in the face after allegedly ‘ruining’ graduate’s cake
‘He was healthy and alive before the flight’: TikTok shows heartbreaking moment after a woman’s Pomeranian allegedly died during a United Airlines flight
Advertisement