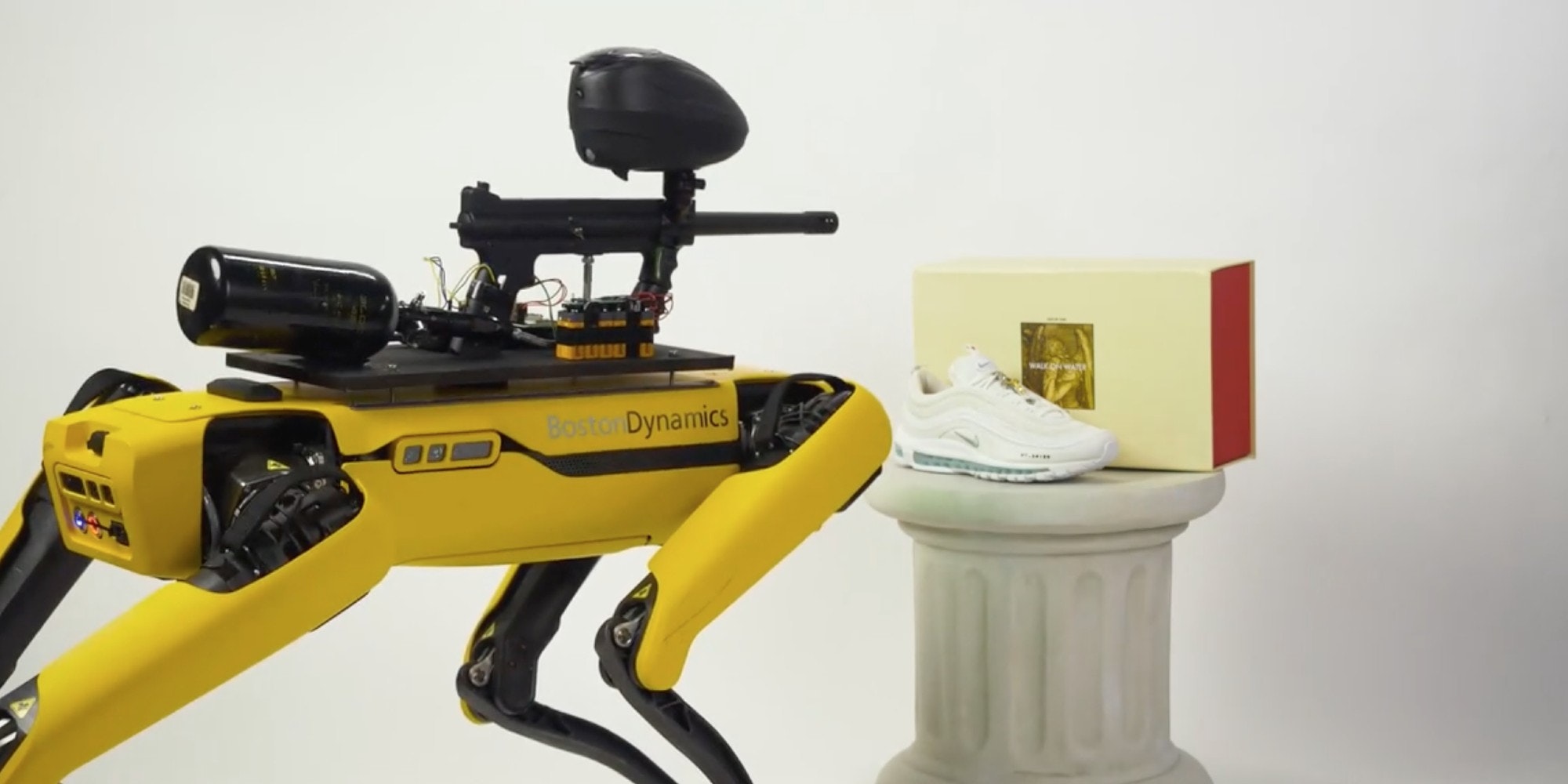 The internet will get a chance to remotely control one of Boston Dynamics’ $75,000 “Spot” robots this week thanks to a mysterious startup company. Not only that, the robot will even come equipped with a paintball gun for added mayhem.

The campaign, dubbed “Spot’s Rampage,” is the brainchild of MSCHF, a New York-based company know for its outrageous publicity stunts and product drops.

MSCHF has repeatedly made headlines for offering up bizarre one-of-a-kind items including holy water-filled sneakers and toaster-shaped bathbombs. No two campaigns from the company are ever alike, and its latest effort may be the most over-the-top to date.

On Wednesday at 1pm ET, MSCHF will unleash Spot inside a small art gallery at its headquarters in Brooklyn. Users who visit the campaign’s website will get a chance to commandeer Spot for two minutes before another user somewhere in the world takes over.

The goal of Spot’s Rampage appears to be nothing more than a little chaos—and perhaps to raise questions about the potential misuse of robots in the future. Numerous messages with politically dark undertones litter the campaign’s website.

“Everyone in this world takes one look at cute little Spot and knows: this thing will definitely be used by police and the military to murder people,” MSCHF says.

Police departments have used robots like Spot to conduct raids, raising ethical questions that MSCHF hopes to highlight with its stunts.

MSCHF says it let Boston Dynamics know its intentions for Spot after the robot was successfully delivered to its headquarters. Boston Dynamics, according to MSCHF, offered them two additional Spot robots for free if they agreed to call off the campaign.

“We talked with Boston Dynamics and they HATED this idea. They said they would give us another TWO Spots for FREE if we took the gun off,” MSCHF said. “That just made us want to do this even more and if our Spot stops working just know they have a backdoor override built into each and every one of these little robots.”

The Daily Dot reached out to Boston Dynamics to inquire about its interaction with MSCHF but did not receive a reply by press time.

Boston Dynamics, however, did issue a public statement on Friday condemning what it described as a planned “spectacle to draw attention to a provocative use” of its robot.

“To be clear, we condemn the portrayal of our technology in any way that promotes violence, harm, or intimidation,” the company wrote. “Our mission is to create and deliver surprisingly capable robots that inspire, delights & positively impact society.”

The Daily Dot was granted early access to Spot’s Rampage and was able to remotely control the robotic quadruped from a mobile phone. Firing its paintball gun in the general direction of numerous art pieces, the highly-capable robot was surprisingly responsive.

But the controlled rampage had some limitations, specifically due to safeguards hardwired into Spot by Boston Dynamics. Despite this reporter’s best efforts to ram into a stack of boxes, a built-in obstacle detection system ensured that Spot never ran headfirst into any objects, although the robot brushed up against some of those objects several times.

Spot did, however, tumble over twice when met with a slick spot on the floor in a far corner of the art gallery. The robot responded by automatically rolling over and standing back up as if nothing had ever happened.

If you’re wondering whether any prize is involved with the campaign, MSCHF assures users that in the end, nobody is a winner. In fact, MSCHF stresses that Spot’s Rampage instead produces one loser: “The human race, when remote-operated dogs of war become commonplace.”

The post Pranksters show how horrifying Boston Dynamics’ police robot dog is by strapping a paintball gun to it appeared first on The Daily Dot.