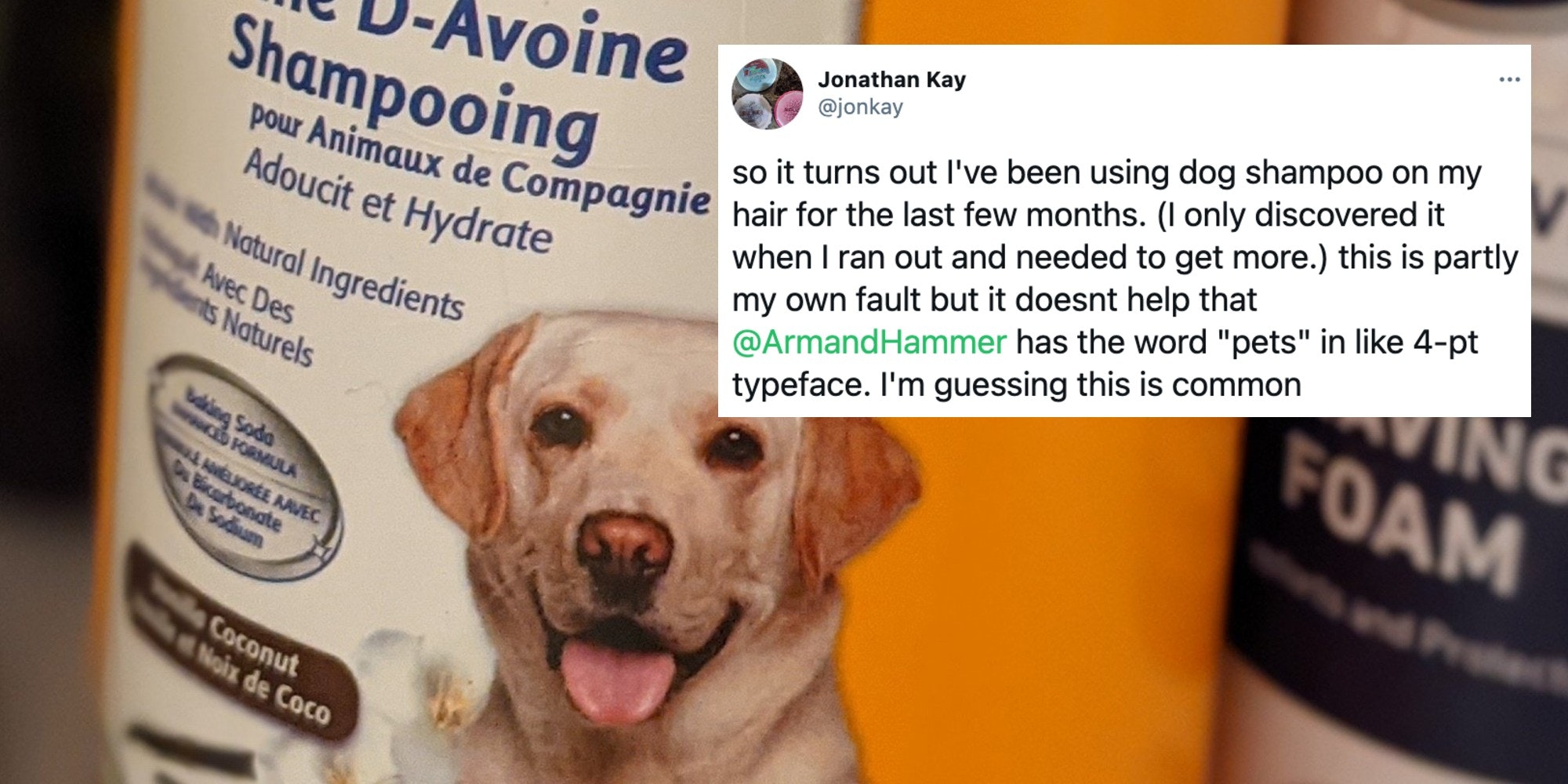 An editor for the right-wing outlet Quillette is getting flamed on Twitter after revealing he was inadvertently using dog shampoo for the last several months.

In a tweet on Sunday, Jonathan Kay stated that he initially failed to notice the word “pets” on a bottle of shampoo from Arm & Hammer.

Kay attempted to blame his mistake on the bottle’s small lettering, accusing the shampoo producer of failing to make their product’s intended user more evident.

But Twitter wasn’t having it. Pointing to the massive dog pictured on the front of the label, users were quick to roast Kay for failing to make the connection.

“The big ass dog on the front didn’t give it away?” @JasleeneJ said.

Others used the tweet to criticiz Quillette, an online magazine that presents itself as an intellectual powerhouse.

“The fact that this man is a Quillette editor and Yale Law graduate tells you a lot about the powers of observation and intellect that those institutions demand,” the Current Affairs magazine tweeted.

Frequent mention was also made of Andy Ngo, a controversial right-wing personality who has appeared in Quillette before.

“Between Andy Ngo and this guy, Quillette really does just hire the dumbest motherfuckers it can find,” @tresdessert wrote.

But Kay has pushed back on the consensus that a dog on the label is an obvious giveaway by arguing that other shampoo bottles show various items including “waterfalls.”

“Lots of shampoos I used in the past have pictures of waterfalls, or people cleaning dishes, or gauzily drawn women frolicking in pastures, or dudes under waterfalls with chests provocatively projected outwards, or whatever,” Kay said, indicating he has also used dishwashing liquid as shampoo.

Kay’s poor defense only made the mockery that much worse.

“Jonathan Kay, an editor at race-science journal Quillette, has been using dog shampoo– with a big picture of a dog on it– for months, and believes he was tricked by small typeface,” @AntiFashGordon tweeted.

Twitter users also began mocking Kay’s tweet by repeating his claims alongside other items, such as food and medicine.

“At the grocery store picking up some toilet paper for myself,” another user said alongside a picture of kitty litter.

It seems unlikely that Kay will be able to live down his dog shampoo fiasco anytime soon.

‘A little too on the nose’: Fans react to ‘SNL’s’ take on Marjorie Taylor Greene, O.J. Simpson getting vaccinated before teachers
21 men accuse Lincoln Project co-founder of sexual harassment
Advertisement