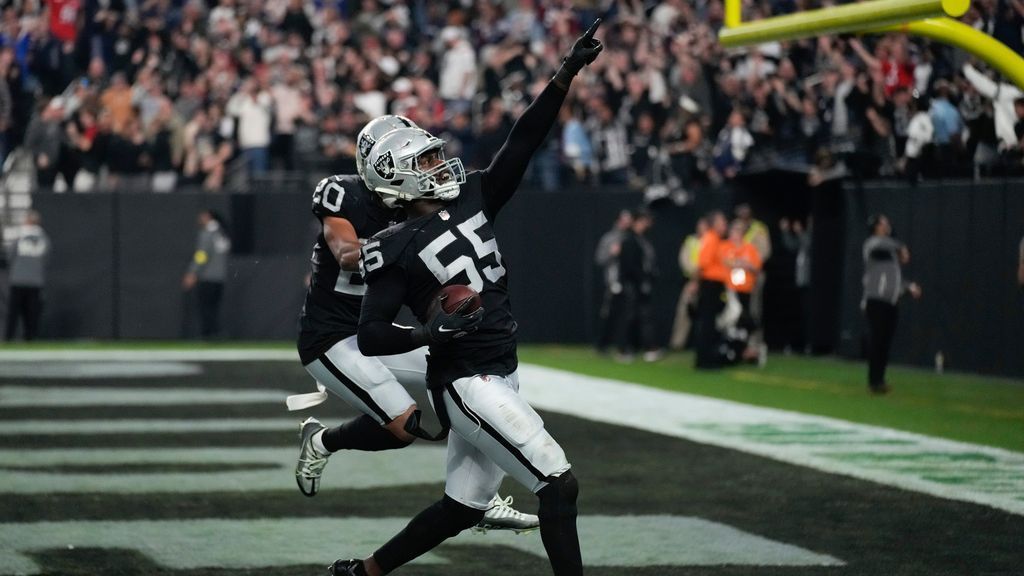 LAS VEGAS — Mark Davis traipsed across the Las Vegas Raiders‘ plush locker room in Allegiant Stadium late Sunday afternoon, a dazed look on his face after the latest chapter in the wild and woolly history of the franchise he owns had unfolded.

“It’s a new house of thrills,” Davis told ESPN with a grin. “Have you ever seen an ending like that before?”

The Raiders and their fans will forget the Tuck Rule and ignore the Immaculate Reception. But they’ll smile at the Sea of Hands and embrace the Holy Roller. And after this one, they’ll reimagine the Heidi Game.

Because what Raiders defensive end Chandler Jones pulled off, a 48-yard walk-off fumble return when he snatched an ill-fated cross-field lateral to give the Raiders a 30-24 victory, was something entirely different.

“I don’t know what they’re going to call this one,” Raiders coach Josh McDaniels said, “but it will probably have a nickname here shortly.”

The Error-Maculate Interception? How else to describe Jakobi Meyers‘ inexplicable attempt to keep hope alive for the Patriots, rather than simply go down and play for overtime?

Because with three seconds on the clock of a tie game, and New England on its 45-yard line, Patriots running back Rhamondre Stevenson burst up the middle — through Jones’ grasp — for a 23-yard gain before he pitched to Meyers along the right sideline. Meyers then spied his quarterback, Mac Jones, near the middle of the field and uncorked a ball backward that stayed in the air for what seemed like an eternity.

Chandler Jones, after missing the tackle on Stevenson, was again pushed to the ground by Patriots right guard Mike Onwenu, but thus ended up in the right place at the right time for Las Vegas.

“We were in a desperado situation — we knew there was zero time left on the clock and I think I saw Jacobi kind of spot up to throw it back and I was just looking for the nearest guy and Mac Jones was right there,” Jones said. “I kind of just went up there and got it and broke a tackle and scored.”

Meaning, he was gone. To the house. Ballgame.

“First I was thinking, ‘Who’s around me?'” Chandler Jones said. “I felt myself stumble a little bit after the stiff-arm, and then I was thinking, ‘Who do I pitch it to?’ I was just trying to keep the ball alive. But when I stayed up, I just turned the jets on. And the rest was history.”

Said McDaniels: “I thought, OK, tackle him, go to overtime. When I saw the ball in the air and then I saw Chandler underneath it, I’m thinking, ‘Oh my God, we might have a chance at this. … Just hopefully he had enough juice in his body to get to the end zone.'”

For Jones, who is in his 11th NFL season, it was his third career touchdown, along with a fumble return in 2013 and a blocked field goal attempt scoop-and-score in 2014. Both came when he was with New England.

It also was the second go-ahead defensive TD on the final play of regulation in NFL history. The other came in 1960, by the Patriots in Week 2 against the New York Titans.

And for the Raiders, who led 17-3 at halftime but trailed 24-17 with just over 30 seconds to play, they became the first team to score two TDs in the final 40 seconds of regulation with the second score giving them the lead since Week 2 of the 2015 season, when the Denver Broncos beat the Kansas City Chiefs.

Hence the Heidi reference, the Raiders scoring two TDs in the final minute to beat the New York Jets in 1968.

“When you play against a former team, you never really want to speak about it but you always have that in your mind: ‘I’ve got to get this team,'” said Jones, who spent the first four years of his career with New England after being the Patriots’ first-round pick in 2012. “So, it does feel a little good. I’ll do a little silent brag there. It felt good. Yeah.”

Jones said he got “emotional” in the aftermath and wild celebration.

“I teared up a little bit because I just love football,” he said. “I’m a huge fan of the game, I love the sport and I think when I started to tear up, I think it had just hit me how big of a play I had just made. So I was like, ‘You know what, let me take this moment to myself a little bit and grab a few tears.'”

NFL senior vice president of officiating Walt Anderson told ESPN/PFWA pool reporter Mike Reiss the referee “looked at every available angle and it was not clear and obvious that the foot was on the white. It was very tight, very close. There was no shot that we could see — we even enhanced and blew up the views that we had. There was nothing that was clear and obvious that his foot was touching the white.

“Probably the best view was what we term a ‘high end zone’ view. TV gave us the most enhanced view that they had as well. We blew it up and I believe TV blew it up and there was nothing that was clear and obvious either way. Had the ruling on the field been incomplete, we would not have been able to change that, either.”

“Don’t ask me to break that one down, I don’t know,” Carr said. “If you’ve been with the Raiders, for any amount of time, we’ve seen our fair share of things happen, right? But I have not seen that one. I’m glad it went our way. … Crazy [that Meyers] threw it back, Chandler caught it, and in my brain, I’m like, ‘Pitch it!’

“I don’t know Chandler’s 40-time but when you stiff-arm [someone] it goes down a little bit. But he made it to the end zone. It was an unbelievable play and I’m glad we had one go our way that way.”