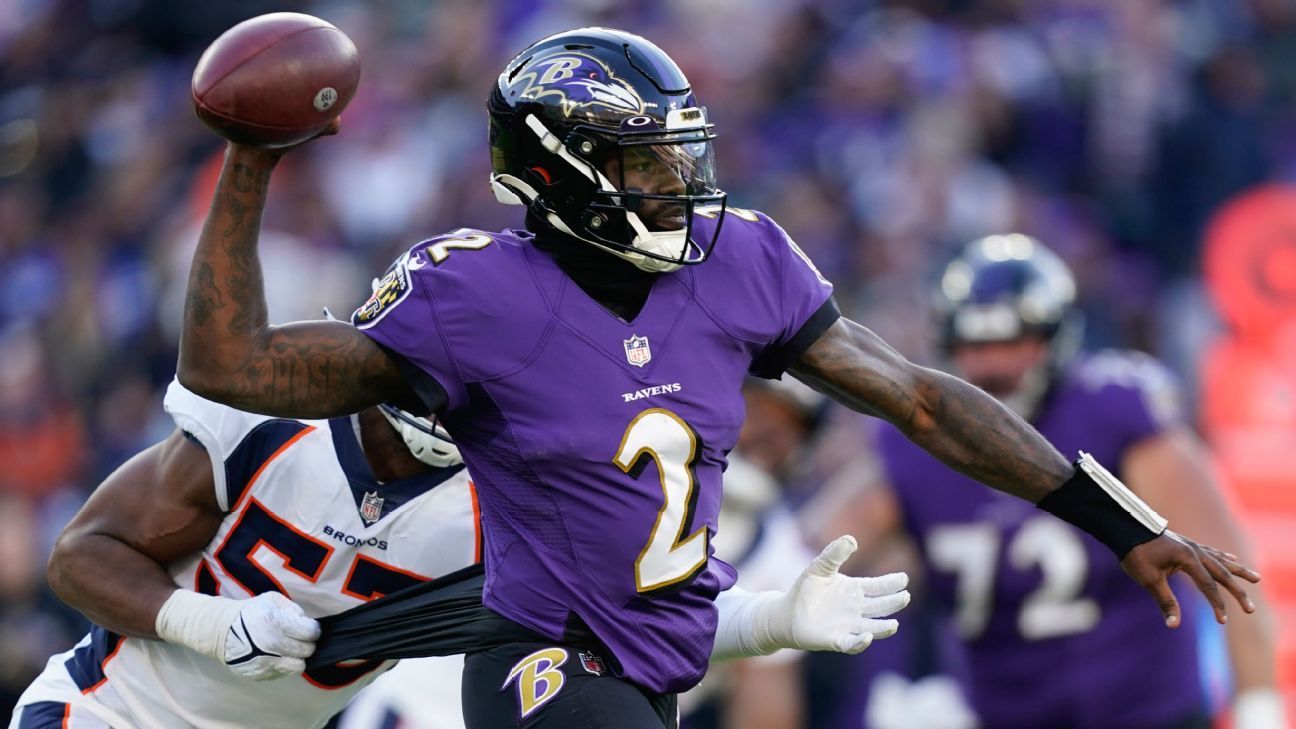 OWINGS MILLS, Md. — Tyler Huntley has been cleared from the concussion protocol, which makes him the obvious choice to start at quarterback for the Baltimore Ravens in Saturday’s game at Cleveland.

Huntley carries no injury designation for Saturday’s game, while Lamar Jackson, Baltimore’s No. 1 quarterback who hasn’t practiced since suffering a knee sprain on Dec. 4, has been ruled out.

“As far as injuries, I’m not going to really talk too much about that,” Ravens coach John Harbaugh said after Thursday’s practice. “I think it’s going to be straightforward when you see the injury report as far as who’s what. That’ll be our statement.”

Huntley has practiced all week after getting pulled from Sunday’s 16-14 win in Pittsburgh because of the concussion protocol. He said he never experienced any symptoms and declared himself ready to start for a second straight week.

“I don’t think I had a concussion,” Huntley said Thursday. “The protocols, they were doing their job, making sure I was safe. Clearly, I’m safe enough to play this week.”

Huntley was removed from Sunday’s game in Pittsburgh midway through the third quarter after Steelers safety Minkah Fitzpatrick‘s elbow nailed Huntley on a vicious shot to the head on a quarterback keeper. According to Huntley, he was sent to the sideline medical tent for evaluation after an independent concussion spotter called down.

Huntley later went to the locker room and was ruled out for the game.

“Once he clears that protocol, I think [we’ll be] all systems go,” Roman said.

Huntley said he cleared the protocol Wednesday night. He was a full participant in Wednesday’s practice but still underwent a couple more tests afterward.

This would mark the second straight week Huntley has started in place of Jackson, who has missed six straight practices. Baltimore’s only other options at quarterback are on the practice squad: undrafted rookie Anthony Brown, who finished out Sunday’s game, and Brett Hundley.

If Huntley plays, it’ll be interesting to see whether he alters his style of running. Over the past two weeks, Huntley has been hit on 31.8% of his plays, which ranks behind only New York Giants quarterback Daniel Jones (34.6%).

Roman said he had “a nice little chat” with Huntley about trying to reduce the amount of contact he takes.

“I’m an aggressive player. I try to get the first down or a touchdown on every down,” Huntley said. “He told me to just slide. That’s something I’m going to try to work on.”

The Ravens (9-4) have won six of their past seven games and sit in first place in the AFC North. Baltimore’s chances to capture the division would increase to 78% with a win in Cleveland (5-8) and decrease to 52% with a loss, according to ESPN’s Football Power Index.

‘It never was about the money really for John’: Why Lynch turned down big money to return as 49ers GM
Jets QB White: No doubt he’ll play with sore rib
Advertisement