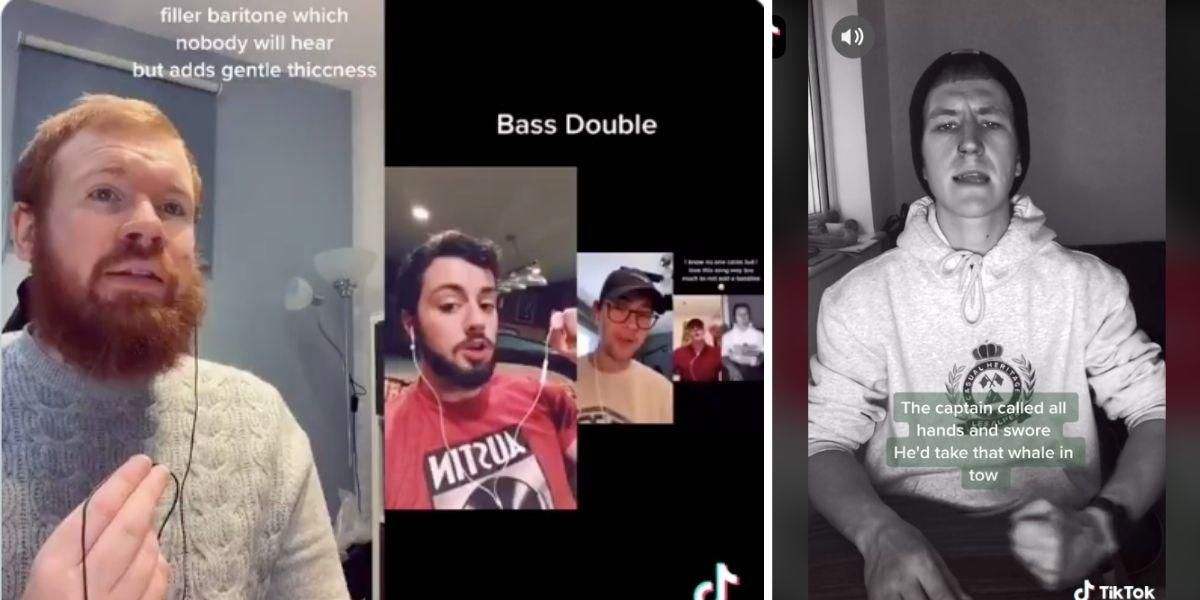 As if we haven’t had enough strange things happen this year (which we’re only two weeks into, by the way), you may have noticed a sudden proliferation of sea shanty videos come through your social media feeds. While a welcome alternative to the footage of violent insurrection and rising pandemic death tolls in the U.S., the question is: Why sea shanties, and why now?

Though there’s actually a wide range of sea shanty communities online, what brought it into the mainstream was a TikTok video from Scottish singer, Nathan Evans, pounding a drum and singing a well-known shanty, “The Wellerman.”

Another singer, Luke Taylor, added some bass harmony to it, taking it up a significant notch.

Soon other sea shanty enthusiasts added harmony upon harmony, and the videos began being shared far and wide.

As of yesterday, a version of the song by a British folk band, The Longest Johns, was #2 on the U.S. Spotify viral chart and had reached #5 on the global chart the day before.

So why sea shanties and why now? There are some theories about that.

As this video from Going Off-Topic explains, a sea shanty was a work song sung by men who had to coordinate their movements while doing repetitive on a ship at sea. We’ve seen similar communal work singing or chanting among various groups, from the military to prison chain gangs. (But with sea shanties, you don’t have the ominous underpinnings of war or the disturbing inhumanity of criminal justice to wade through in order to enjoy the rhythmic singing.)

Sea Shanty TikTok is TAKING OVER in 2021 www.youtube.com

What might be behind the newfound obsession with sea shanties is the current moment we find ourselves in the communal nature of the singing, adding voice upon voice—and especially doing so virtually through TikTok. Finding a way to create such harmonies together strikes right at heart of the human connection we’re desperately missing right now.

At the beginning of the pandemic, we talked a lot about how we were “all in this together,” but the months since have shown us that no, actually, we’re not all in this together. Some of us are still denying we’re in it at all, and that loss of a shared vision and purpose—which were always vital for us to avoid the disaster we’re in, losing 4,000 Americans a day—is painful. These harmonies feel like a healing balm of sorts for that societal wound. They also fill a void we all feel in being distanced from our friends, family, and community.

As science journalist Leigh Cowart points out, “behavioral synchrony feels really, really good to humans and many of us have been social distancing for months and deprived of this.”

sea shanties are popular right now because behavioral synchrony feels really, really good to humans and many of us… https://t.co/wFbZfNewQF

For further proof of how much we need this proof of community in harmony, please try to watch this video of 500 people singing a shanty together and not get teared up:

Leave Her Johnny Mass Choir Community Video Project!! We hoped we could get 100 people together to sing this wonder… https://t.co/aVlrGupRxD

If that’s a little too much mushy emotion for you, the nature of these work songs may also reflect the feeling of the “seemingly endless, labor-filled test” of our resolve that pandemic living has forced us into, as Dan Sheehan points out. We’re all heaving and hoeing just to make it through the day at this point.

Why are sea shanties popular again it’s not like everyone is simultaneously experiencing a seemingly endless, labor… https://t.co/7X7X9cHPah

They’re also just…fun to sing. And catchy. The repetition of the chorus throughout makes it easy for anyone to join in and add their own unique voice to the mix. Watch this guy slowly get won over:

Who knows how long the sea shanty trend will last, or what creative lengths it will go to. After all, we’ve already hit electro-shanty territory, which I guarantee nobody saw coming a few months ago.

Maybe we’ll end up with an entirely new genre of music when all is said and done. There are definitely worse things that could come out of a year of pandemic misery than a harmonious reminder of community and creativity.

7 sustainable products everyone should have in their kitchen
A teenager having a seizure in the UK was saved by an online gamer 5,000 miles away in Texas
Advertisement