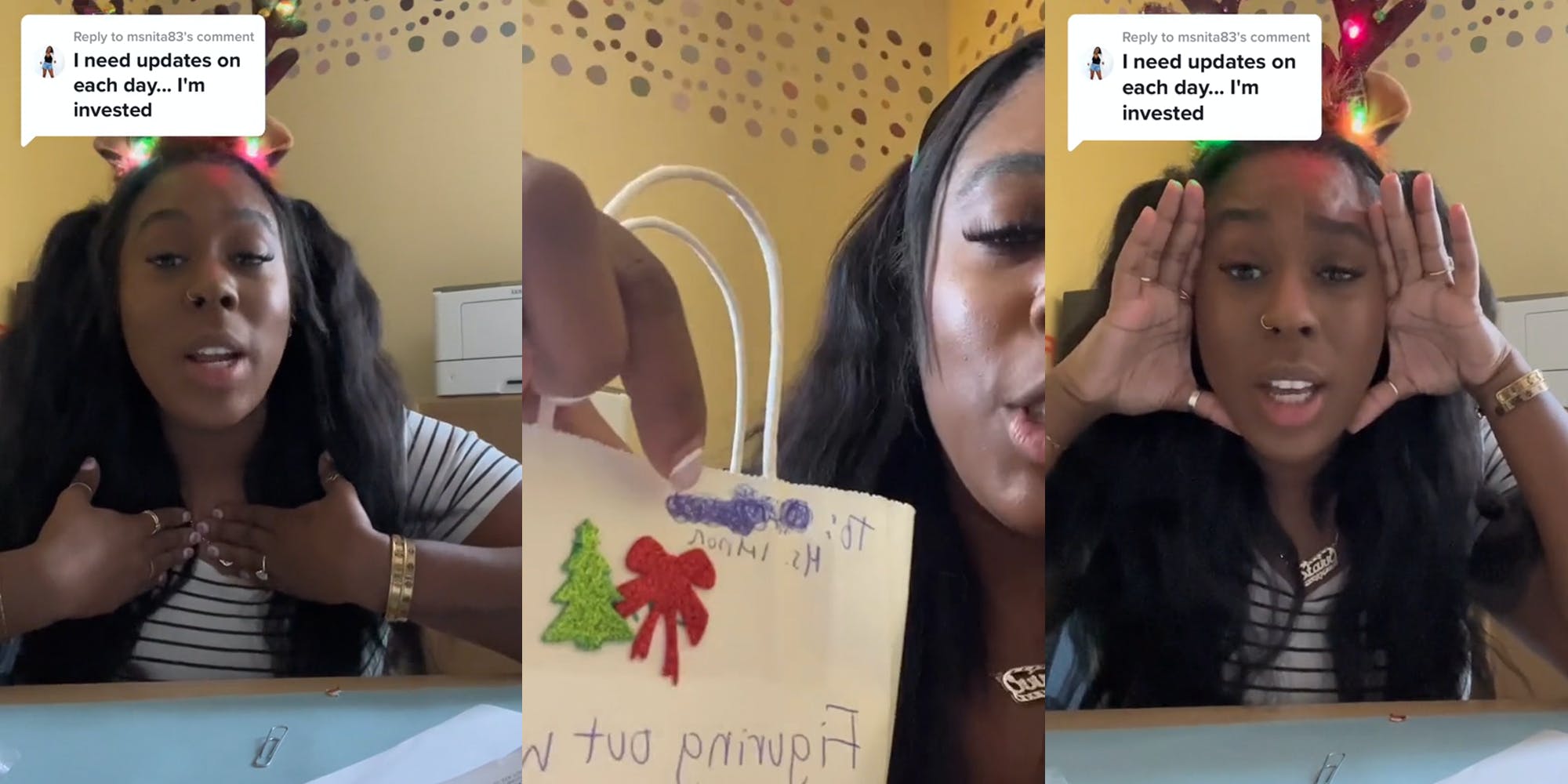 Navigating Secret Santa gift exchanges at work can be difficult or even annoying for many employees, but one TikToker says her co-worker made their exchange more uncomfortable by regifting her gift on the same day.

The TikToker, Alexis Starling (@ughstarr), works as a school counselor and chose to participate in a week-long Secret Santa gift exchange at her school. The gift exchange is structured so that each participant gives and receives a $5 gift for the first four days and then gives and receives a $20 gift on the last day, Starling explains in one of her recent TikTok videos.

On the first day of the exchange, Starling hid the gift for her Secret Santa recipient, a teacher, in her classroom. Later, she saw that the teacher had moved the gift to someone else’s cubby.

“This is where I wrote her name. She scratched it out and wrote the other teacher’s name,” Starling says, showing the gift bag in one of her videos. “You regifted the gift I gave you in the same fucking day?”

The TikToker is clearly annoyed at the teacher and adds in the video that she might not bring “a damn thing else” for the rest of the week.

why do I always get so mistreated w secret santa LOL

Several viewers applauded Starling for taking the gift back, while others couldn’t get over the teacher’s decision to scratch out her name and write the other teacher’s.

“Her scratching the name out is unhinged behavior [crying emoji],” one viewer commented on the video.

“She could have at least played it off with a new BAG [laughing emoji],” another user wrote.

Some viewers commented that they no longer participate in Secret Santa at work because of co-workers like the teacher.

“Exactly why I don’t participate,” one user said.

Another user commented, “always say no to gift giving at work. ALWAYS.”

In another video, Starling explains that the Secret Santa exchange was optional.

The TikToker says she took the gift back, as many viewers pointed out, because she wanted to confirm that the teacher was reusing her gift, not just the bag. She says it was “a slap in the face” that the teacher not only reused her gift but also left it in the same gift bag. Starling also argues that the teacher could have been more discreet, rather than leaving it in the teachers’ area for everyone to see.

In the video, Starling reveals that the gift was a mug that says “Sounds like a you problem.” She chose the gift knowing that the teacher really likes mugs. Inside the mug, she included some cocoa, which the teacher apparently took before regifting just the mug.

The TikToker says there isn’t an excuse for the teacher’s behavior, and she plans to address the problem with her. She adds that she likes the teacher and thinks that the teacher will feel “very, very, very, very crunchy” when she finds out Starling happened to be her Secret Santa.

Starling says she considered reusing the same gift bag from the first day, crossing out the second teacher’s name and writing the original teacher’s name again. She also debated giving the teacher no more gifts until the last day when Secret Santa identities are revealed.

In another video, Starling says she decided to reuse the same bag for her next gift. But when she was on the way to deliver her gift, she ran into the teacher’s Secret Santa recipient, who said she had heard about the teacher regifting Starling’s gift to her.

Starling says she didn’t want to be “the Grinch that stole [her] Secret Santa Christmas,” but she confirmed the rumors to the woman. The woman was on Starling’s side and agreed that the teacher’s behavior was “crunchy,” the TikToker says.

Instead of giving that day’s gift to the teacher, Starling decided to give it to the woman who missed out on her first gift due to the re-gifting incident, she says. The TikToker plans to give the rest of the gifts to the teacher, but says she’s still deciding how to call her out.

“I wanna let her know that I know,” she says.

The Daily Dot reached out to Starling via TikTok comment.

The post ‘She scratched it out and wrote the other teacher’s name’: School counselor says her Secret Santa present was regifted right in front of her appeared first on The Daily Dot.

Disinformation campaign threatens rights of Pakistan’s trans community
‘People be paying for air and crumbs’: Shopper combines 2 bags of Ruffles chips together to make a full bag at check-out
Advertisement