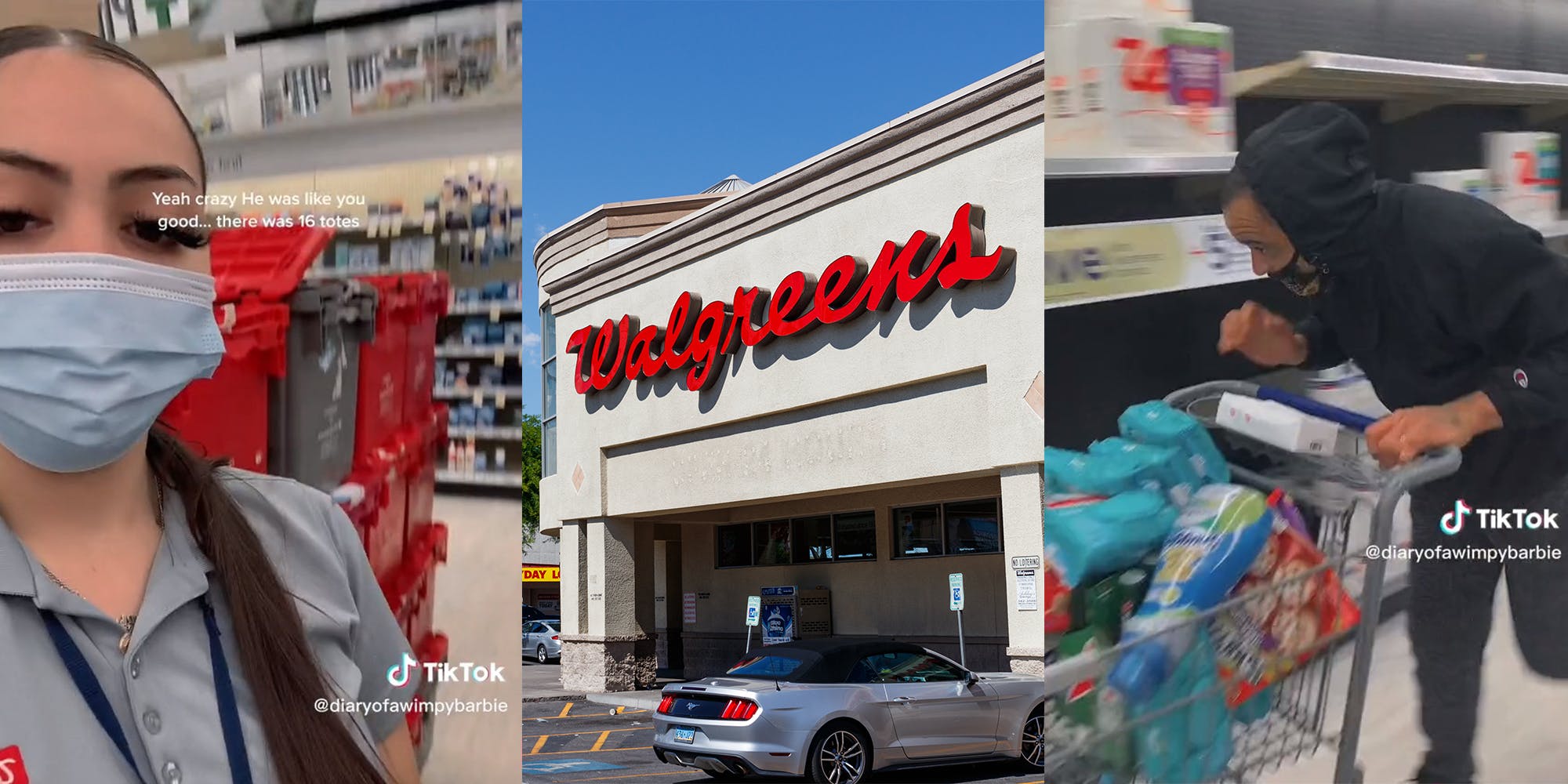 A Walgreens employee named Emily (@diaryofawimpybarbie) went viral on TikTok after uploading what an average day at work for her is like. In the clip, she records two separate incidents of blatant theft that are intercut with her more mundane shift responsibilities.

Viewers were stunned by how casually she speaks of the shoplifting incidents as they couldn’t believe the sheer quantities of products the thieves filled their carts up with. Other users on the platform were impressed by the way Emily conducted herself during these incidents and wondered why the thieves brazenly filled entire carts up with products before exiting the store.

Emily says in the clip, “Hey guys welcome to a day in the life of a Walgreens employee. OK so this is the first thief of the day.”

The video shows a man extricating items from the freezer section of the store and into a small cart, then going to other shelves of the store and filling it up with a variety of different products.

The TikToker says in the voice over, “A customer yelled, ‘the police are across the street!’ Manager called the police, no help. He’s taking items off empty shelves…I was like, what you gonna do if the police catch you?”

That’s when the clip cuts to footage of a police car with its sirens engaged from what looks like a gas station near the Walgreens location, before cutting back to her inside the store, restocking the cigarettes shelf behind the counter.

“And then there they were and then they didn’t catch him so it was embarrassing. But anyways…back to work you know gotta get the bread, gotta put in that work you feel me, there’s my little OCD,” she says as she continues to make prices of snacks in the store, before footage of yet another thief in the store comes up on the screen.

“OK this is number two…yeah crazy he was like you good,” she says.

The video ends with her showing off the sixteen large boxes of product she had to re-shelf, before she extricated her personal items from her locker and called it a day.

In a follow-up clip, Emily addresses viewers’ burning questions about how she handles the shoplifting incidents, saying that the reason she only records is because she will not put herself in harm’s way “to receive any product back.”

Emily posted follow-up videos of other thefts that occurred in the store on separate days. Judging from the “empty electronics department” and other bare shelves in certain parts of the store, it appears that theft from the location isn’t uncommon.

In one of the clips, she discusses how she helped tend to a homeless woman who came into the store with a bleeding ankle, and who then returned with three puppies who were in need of food and care. Emily says she purchased them flea shampoo and something to eat, before her video cut to other shoplifters.

Other users on the platform remarked how impressed they were by the equanimity and humanity Emily exhibited during her time in the store. Some also couldn’t understand why the shoplifters appeared to be so aggressive in their theft of store items.

Others joked that they wanted to know the location of the particular Walgreens because they needed to get a few things themselves.

However, the individual from the first clip that she recorded couldn’t evade authorities for long as she reported that he was caught at a later time. Emily urged folks watching her videos to not shoplift from stores as its ultimately not worth, and encouraged people to simply ask instead if they are in need of something and can’t afford it.

Judging from Emily’s profile, it appears that she lives and works in the Houston, Texas area. In 2021, it was reported that shoplifting instances were on the rise during the COVID-19 pandemic. The Houston Police Department publishes public analytics containing reports of crimes by category for folks to sift through. In the first eight days of January alone there were no fewer than 184 reported incidents of shoplifting.

The Daily Dot has reached out to Emily via TikTok comment and Walgreens via email for further information.

The post ‘So this is the first thief of today’: Walgreens employee records 2 thieves walking out with carts full of items in one day appeared first on The Daily Dot.

‘If they’re going to make a violation they better be right’: Woman says HOA harassed her family after wrongly accusing them of leaving out their trash bins
‘The manager was amazingly calm’: McDonald’s ‘Karen’ throws food on the floor for being incorrect
Advertisement