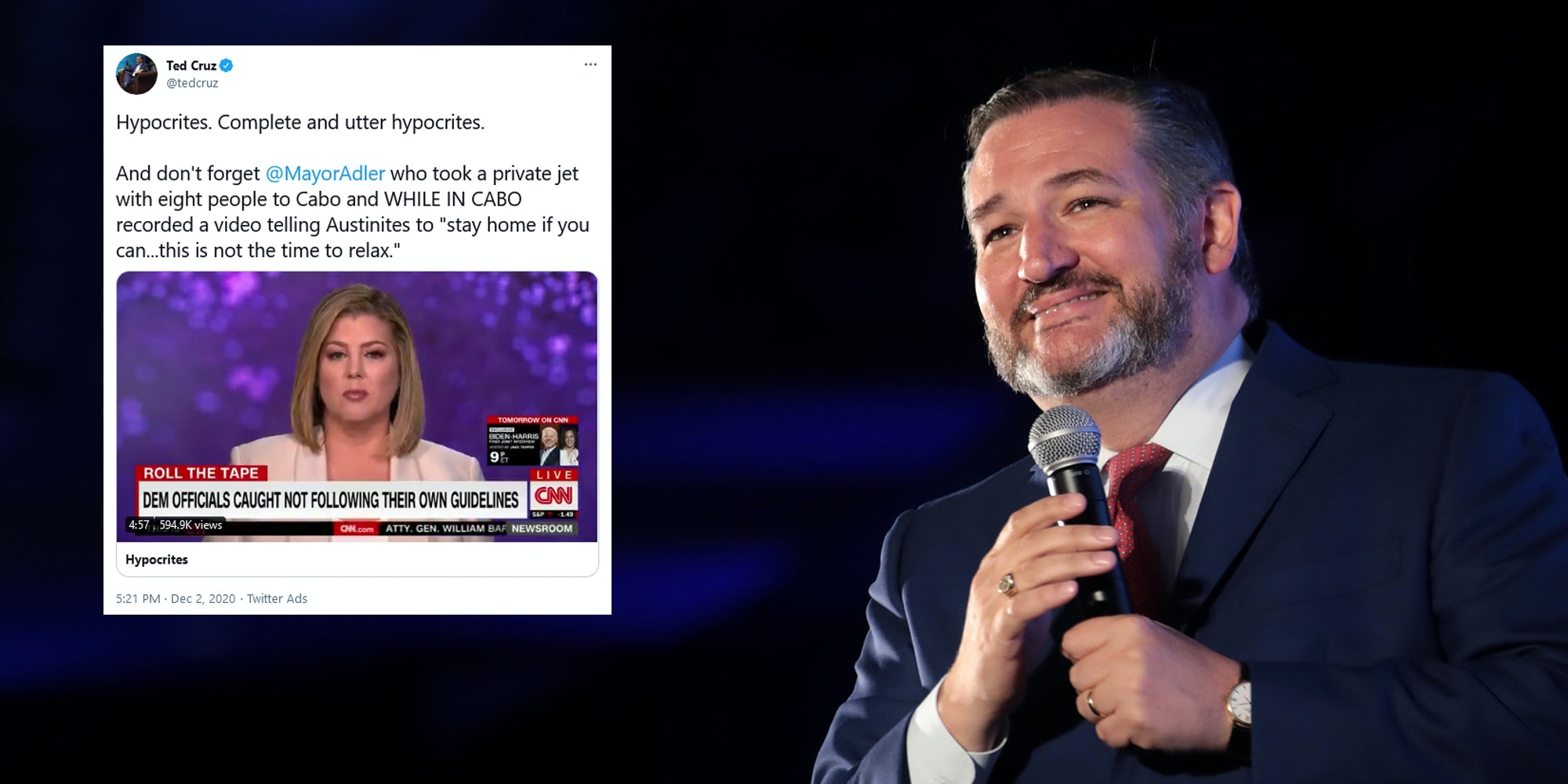 Sen. Ted Cruz (R-Texas) has come under fire for boarding a flight to Mexico amid his state’s weather crisis—and his own tweet criticizing a mayor of Austin for flying during the pandemic is now coming back to haunt him.

Statewide power outages and freezing temperatures have spread across Texas, leaving many in the cold for days. But, the crisis in his state did not stop Cruz from boarding a flight to Cancun, as confirmed by Fox News.

As pictures of Cruz getting on a plane circled on the internet, so has an old tweet from Cruz about Democrat Mayor Steve Adler.

Last December, Adler had been warning Austin residents to stay home for the holidays. Except, he was doing so from his vacation in Cabo San Lucas.

In response, Cruz wrote: “Hypocrites. Complete and utter hypocrites. And don’t forget @MayorAdler who took a private jet with eight people to Cabo and WHILE IN CABO recorded a video telling Austinites to ‘stay home if you can…this is not the time to relax,’.”

Cruz was one of many who called out the mayor. Now, Cruz’s time has come as he was seen boarding a flight not only during a catastrophic weather event, but also the COVID-19 pandemic.

The old tweet from Cruz resurfaced on Thursday, and attracted a heap of criticism.

Twitter user, Juan Gomez, was the first to publish the image of Cruz at the airport. Soon after, Keith Edwards, a former Lincoln Project employee, republished the photo.

“Ok, at first I didn’t think this was ted cruz, but this person has the same mask as the senator. Did Ted Cruz fly to Cancun today during his state’s emergency?” Edwards tweeted.

Almost immediately, the internet began to do what it does best: meme Ted Cruz.

Another Twitter user inserted Cruz into another bad optics situation a Republican politician got himself into.

@HelenKennedy put Cruz into the infamous photograph of former New Jersey Gov. Chris Christie at the beach while state-controlled beaches were shut down due to a government shutdown.

But those weren’t the only places people decided to put Cruz into:

Other people just dunked on Cruz for leaving the state amid a crisis.

Now the hashtags #TedFled and #CancunCruz are trending.

“When the going gets tough, the tough get going… to Mexico. #FlyingTed #CancunCruz,” one Twitter user posted.

“So is it #FledCruz, #FlyingTed or #CancunCruz,” another account tweeted.

Cruz has yet to release a statement on the images as of publication. However, the Associated Press reported, citing a source, that the trip to Cancun was “long-planned” and he was expected to return “almost immediately.”

The post Ted Cruz once criticized mayor for fleeing Austin during COVID—now he’s in Cancun appeared first on The Daily Dot.