In 2004, 22-year-old Lindsay Cutshall and her fiancé, 26-year-old Jason S. Allen were living the dream. The adventurous couple were both from the midwest and met at Appalachian Bible College in West Virginia. They became engaged 6 weeks after meeting and were going to get married in the fall.

That summer, Lindsay and Jason had jobs as counselors at an outdoors summer Bible camp in the Sierra Nevada foothills in California. Nearing the end of summer, the couple decided on a weekend road trip. They went to San Francisco and visited the Fisherman’s Wharf. They then drove up the coast and stopped in the tiny town of Jenner in Sonoma County, CA. It’s thought that the couple was unable to find a room to spend the night in the tourist town of just over a hundred people, so they decided to sleep on the beach in a state park. Camping on that beach is technically illegal, but it’s common in California for people to sleep on beaches and it is not considered dangerous.

Unfortunately, Lindsay and Jason were the exception to the rule.

On August 14, 2004, they were both murdered by .45-caliber Marlin long rifle (an uncommon type of gun) as they slept on the beach. None of their possessions were missing and neither Lindsay nor Jason were sexually assaulted. They were simply murdered in their sleeping bags and left. Their bodies weren’t discovered until August 18 when a helicopter pilot spotted them and notified police.

The following year, in November 2005 I spent the night in a sleeping bag on a beach a few hours north of where Lindsay and Jason were murdered. I had never heard of the murders. Like the couple, I’d been traveling. A group of friends were spending the night on a few campsites in Brookings, OR. Three of us decided to bring our sleeping bags to the beach, a short hike from the campsites. We wanted to sleep under the stars and wake up to the sound of ocean waves.

We were young and stupid. We didn’t have a flashlight or cellphones, we used the flash of a camera to find our way back to our sleeping bags when it got dark. Lindsay and Jason weren’t doing anything unusual or dangerous, they were normal 20-somethings doing normal 20-something stuff. 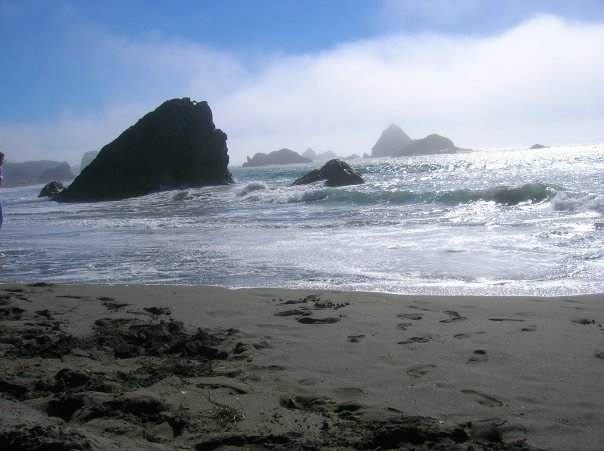 For two years there were no leads in the murders. Then, the police decided to release more information in hopes the public could help identify additional suspects. They released drawings and poems found near the murder site and a “guest book” found in a driftwood hut on the beach. They also revealed that they found “Camo” beer near the murder site, which was primarily distributed in Wisconsin. They also offered a $50,000 reward for information leading to the killer’s arrest.

13 years after the murders on May 5, 2017, the Sonoma County Sheriff announced that they had made a “major breakthrough” in Lindsay and Jason’s murders. An early person of interest in the case who had never been ruled out as a suspect, was now being charged with the murders.

38-year-old Shaun Gallon, a Sonoma County resident, had recently murdered his own brother with an AR-15. Both men lived at home with their mother, who was at home in another room at the time of the murder. Gallon was known as a local weirdo who was obsessed with doomsday prepping and abusing animals. While police were questioning him for his brother’s murder, they again asked him about Lindsay Cutshall and Jason Allen. This time, Gallon slipped up and told them information only the killer would know.

During the press announcement, police read a statement from Bob and Delores Allen and Chris and Kathy Cutshall:

“We are extremely pleased that our children’s murderer is in custody where he belongs. We praise the Lord for his capture and we trust in the due process of the law. We would like to thank the heartfelt concern of the people of Jenner and Sonoma County. We have appreciated your support for this case throughout our thirteen-year ordeal.”

Of the Jenner, CA murders, Gallon confessed that he saw the couple sleeping while walking on the beach. He then returned to his vehicle to get his rifle and kill them. He told police, “That’s when I snapped. I was like ‘Oh my god, I’m just going to start killing people.” He killed Jason Allen first. Lindsay Cutshall woke up and saw her fiancé dead next to her before Gallon murdered her, too.

When the bodies were discovered, Gallon says he burned his shoes to get rid of the evidence. He then called his father and asked him to get rid of his .45-caliber Marlin long rifle. His father obliged. Gallon says he was driven by “hearing voices” and alcoholism. Law enforcement working the case disagree, they say Gallon is a malignant narcissist who hunted victims like prey and felt no remorse for his crimes. Gallon’s friends and family, blame a bad trip he had on LSD in 2000.

What disturbs me about Gallon, is that it still took 13 years to connect a well known extreme animal abuser (I’ll spare you the details) to the Jenner, CA murders. He was found wandering the beach a week after the murders wearing camo and with a stolen (and loaded!) gun in his pocket. At one time, one of two women Gallon had children with threatened to turn him in and collect the $50,000 reward the Sonoma County Sheriff was offering. Clearly many people in his life suspected that Gallon had done something very wrong. As frustrating as it is, it also explains how killers can hide in plain sight for decades.

On May 17, 2018 Shaun Gallon was officially charged with murdering Lindsay and Jason. He pled guilty. He received three consecutive life terms without parole and 94 years in state prison for Lindsay and Jason’s murders, the murder of his brother, and another unrelated attempted murder in 2004.

Lindsay Cutshall’s mother brought Lindsay’s unused wedding dress to the sentencing to show Gallon. They played a video of Lindsay and Jason excitedly talking about a near death experience they had earlier in the summer of 2004 while white water rafting at the camp they worked at. The man Gallon had attempted to kill in 2004 also attended the sentencing hearing. He told Gallon, “This is the most freedom you’re ever going to see again…I’m going to go drink beer and eat fried chicken, but you only have one good day left and I think we all know what that is.” Gallon did not speak during the sentencing. His own mother said she was too traumatized to attend.