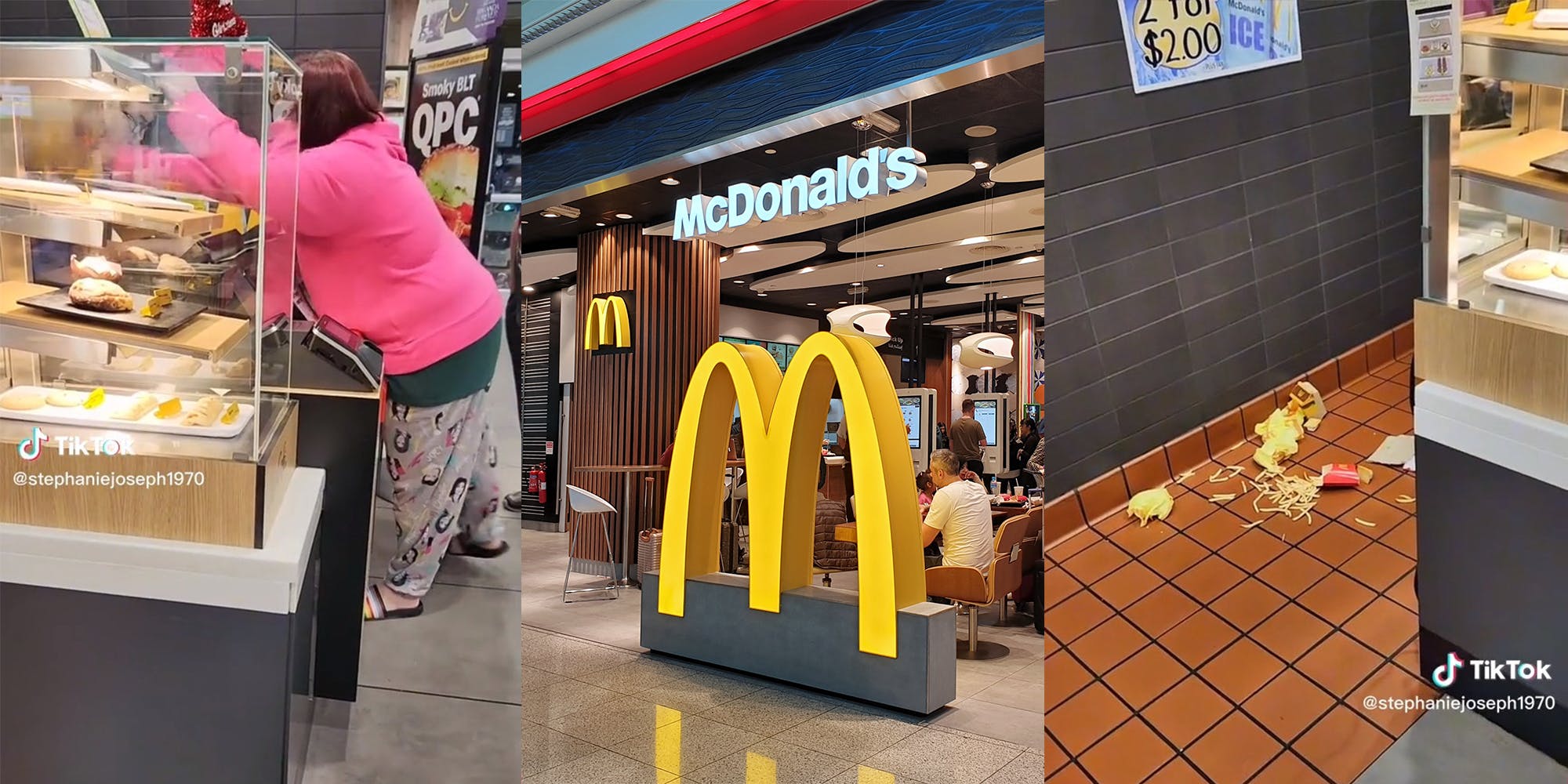 A TikTok user recorded a “Karen” at a McDonald’s location take a bag of what appears to be a freshly made order and angrily throw it to the ground before saying, “that’s wrong.”

User Stephanie Joseph (@stephaniejoseph1970) writes in a caption for the video: “i have watched ‘Karen’ videos, but never seen one in person until now. The Manager was amazingly calm. I told him that I appreciated how calm he was and how he handled the situation!”

In the clip, a woman wearing a pink hoodie sweater and what looks like character pajama pants argues with a McDonald’s employee over her order. She then throws the food on the floor, the camera panning to the floor, revealing a mess of french fries and other items.

i have watched 'Karen' videos, but never seen one in person until now. The Manager was amazingly calm. I told him that I appreciated how calm he was and how he handled the situation!

After the woman’s outburst, the worker maintains their composure and calmly asks if they had two crispy chicken sandwiches as part of their order.

The woman tells the worker, who is intently listening to her behind the register but seemingly avoiding eye contact, the items she initially asked for.

“No. I had two McChickens, I have one crispy chicken, two Big Macs, and two…McDoubles,” she says. The woman recording the video repeats “Oh my god” to herself as she captures the interaction.

The customer stands motionless with her hand at her hip, staring at the McDonald’s worker, who moves between two separate registers during the exchange the entire time . After a few tense seconds of silence, another McDonald’s employee walks out from the back holding two bags of food, “All right who has what?” the worker asks.

The customer turns to them and says, “That should’ve been asked earlier.” The food is for another patron, however, and they take the bag from the second McDonald’s employee off-camera. At the end of the video, the worker speaks to the customer, again, in a calm and measured manner.

Following the pandemic, reports of worsening consumer behavior, particularly in the food service and hospitality industries, began pouring in. Employees have said they were spoken to and treated more rudely than ever before following the ending of self-isolating and social distancing protocols. The New York Times also noticed a marked increase in anger among customers as well, and one employment research survey indicated that as much as 60% of people who quit their jobs cited poor treatment from clients/customers as the culprit.

TikTokers were shocked at the rudeness displayed by the McDonald’s customer. While some quipped that “pajama pants make people angry” there were others who couldn’t believe that the irate customer was even served in the first place.

User Ray Gonzales said, “I would have refused service,” which is a sentiment that many seemed to share. Another viewer, Renee Schoonover, remarked, “I would have just refunded her and said leave.”

The Daily Dot has reached out to Joseph via TikTok comment and McDonald’s via email for further information.

The post ‘The manager was amazingly calm’: McDonald’s ‘Karen’ throws food on the floor for being incorrect appeared first on The Daily Dot.

‘So this is the first thief of today’: Walgreens employee records 2 thieves walking out with carts full of items in one day
What was the best meme of the year?
Advertisement