The top 12 celebrity cancellations of 2021 – Nogagames 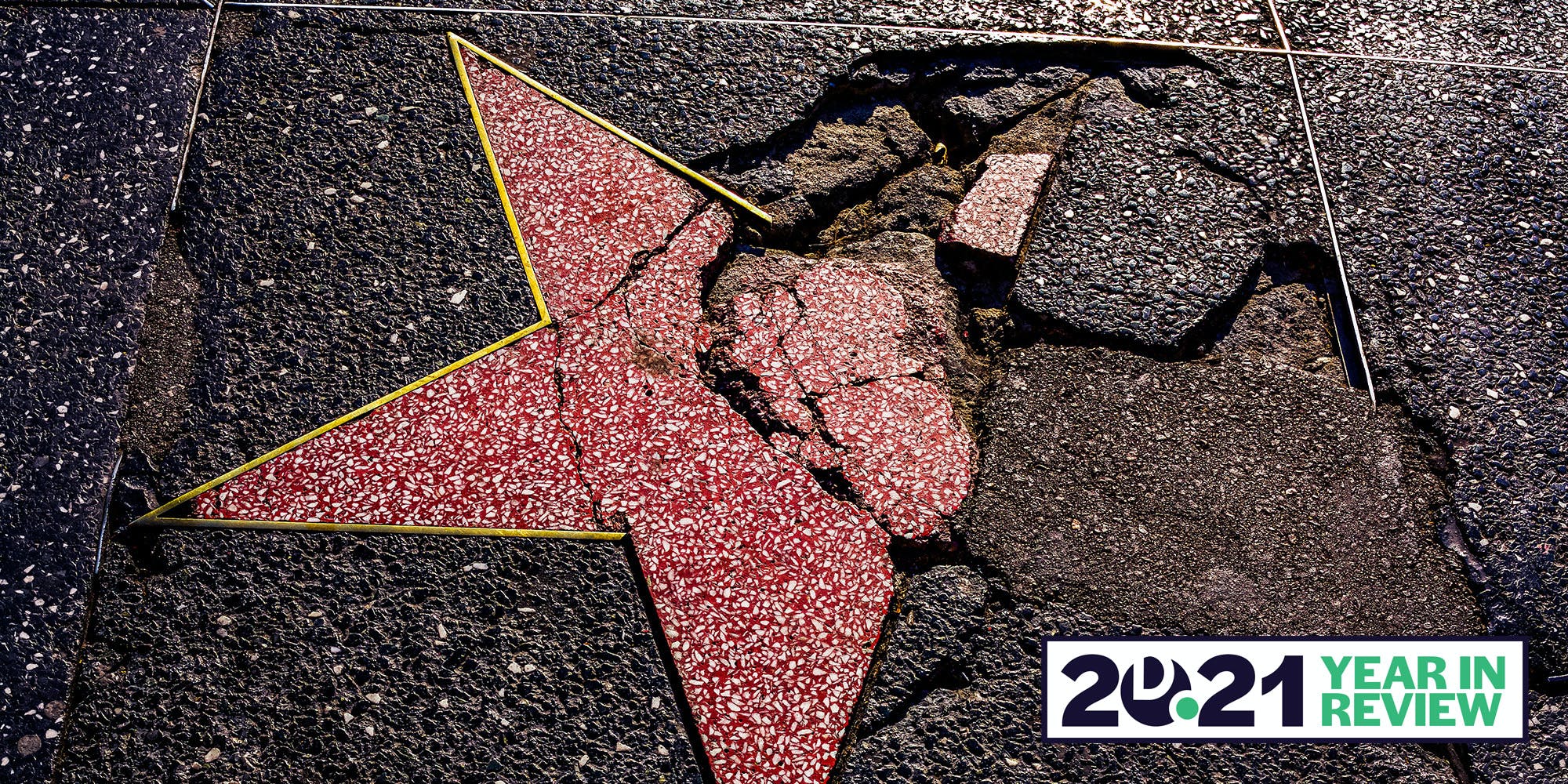 The term “cancel culture” means different things to different people, ranging from career-ending celebrity scandals to bloggers doxxing each other over ideological feuds—or politicians reacting to mild criticism. Cancellation is a frustratingly ambiguous term. At the same time, though, you know it when you see it.

For our purposes, we’re defining cancellation in these terms: A public figure who faces widespread backlash and rejection, either by the general public or by a broad swathe of their target fanbase. Most of the time, this ties into some kind of scandal, ranging from serious criminal allegations to offensive comments made in the press. Other times, the reasons can be more nebulous.

There’s no doubt that a lot of celebrities fit these criteria in 2021, so without further ado, here they are:

Let’s begin with a controversial one. On the one hand, Chris Pratt‘s Hollywood career is still flying high. He isn’t facing repercussions for bad behavior—or, in fact, exhibiting explicitly bad behavior in the first place. Compared to most of the people on this list, he’s kind of dull. On the other hand, the tide of public opinion is rapidly turning against him.

The anti-Pratt backlash is motivated by two factors: His personal values, and his overexposure as a star. This year, he faced near-universal derision when he was cast in two high-profile voice acting roles, Garfield and Super Mario Brothers. Both were seen as textbook examples of Hollywood prioritizing name recognition above appropriate casting.

Meanwhile, Pratt was embroiled in several micro-scandals that either made him look like an asshole, or highlighted his seemingly conservative politics, separating him from the blandly progressive image of most Marvel stars. Without doing anything egregiously bad, he’s cemented his image as the “worst Chris” of Hollywood’s big four Chrises.

After building a career as one of America’s biggest talk show hosts, Ellen Degeneres‘ empire collapsed in the wake of workplace abuse allegations. Last summer, BuzzFeed ran a series of articles characterizing the Ellen show as a toxic work environment. This led to an internal investigation and several staff resignations, ultimately destroying Ellen’s cozy public persona. In 2021, she announced that the show would end next year. A literal cancellation.

Beauty YouTuber James Charles is no stranger to scandal, but 2021 proved to be the last straw. This year he admitted to sexting underage boys, and his channel was temporarily demonetized by YouTube. He’s also being sued by a former producer who accuses him of overworking and underpaying her.

In addition to her career as a model and cookbook author, Chrissy Teigen crafted a hugely popular social media presence thanks to her funny, relatable persona. This proved to be her undoing, as people reacted strongly to any perception of hypocrisy.

Teigen has faced horrifying harassment on Twitter over the years, but this was the first time she framed her experience as “cancellation.” In May 2021, reality TV star Courtney Stodden accused Teigen of cyberbullying them when Stodden was just 16 years old—an accusation supported by screencaps of old tweets. Teigen apologized for her behavior and temporarily deleted her Twitter account, but her public image hasn’t entirely recovered from the scandal.

MMA fighter turned actress Gina Carano lost her most high-profile acting gig to date—all thanks to her divisive and offensive social media posts. Playing Cara Dune on The Mandalorian, Carano was tipped to lead her own Star Wars spinoff series on Disney+. However, this project was canceled—and her Mandalorian role was mothballed—after she began to post increasingly offensive content on Twitter and Instagram, including right-wing conspiracy theories, transphobia, anti-Semitism, and anti-vaccine sentiments.

During a performance in July, rapper DaBaby unleashed a homophobic, misogynistic rant that promptly went viral online. This inspired a wave of backlash, as music fans criticized DaBaby for promoting homophobic sentiments and stigmatizing HIV. In the wake of this controversy, numerous music festivals including Lollapalooza canceled his performances, and although DaBaby posted an apology on Instagram, he deleted it a few days later—spurring on yet more backlash.

Best known for her starring role in Netflix‘s Unbreakable Kimmy Schmidt, Ellie Kemper doesn’t have much of a public profile as a celebrity. This all changed in June, when Twitter users discovered her history as the Queen of the Veiled Prophet Ball in 1999—a long-running society event in St Louis. She was quickly labeled a “KKK beauty queen” due to the Veiled Prophet Ball’s historical white supremacist connections.

While “KKK” is definitely an exaggeration of Kemper’s role here, the Veiled Prophet Ball has been criticized by local anti-racist activists, connecting the city’s elite with white supremacist organizations. In turn, this led to a public conversation about nepotism and privilege in the entertainment industry, particularly among white celebrities from wealthy backgrounds.

Controversy is practically Dave Chappelle‘s middle name, but his last few comedy specials have faced an unusual amount of backlash, culminating with his final Netflix special this year. Released in October, “The Closer” inspired accusations of transphobia and sexism, prompting a firestorm within Netflix itself. Netflix employees walked out in protest, concerned that the company was hostile to trans people.

This puts Chappelle in an interesting place on this list. He often frames himself as a victim of cancel culture, arguing with his own critics. His recent comments have also soured many people’s opinion of him as a comedian, and he’s sparked high-profile protests. At the same time, his career isn’t noticeably suffering, and he’s a headline act at Netflix’s upcoming comedy festival. Meanwhile, two transgender employees have left Netflix in the wake of this controversy.

Over the past year, several of Marilyn Manson’s ex-partners have come forward with serious allegations of abuse and sexual violence. Currently facing several lawsuits, Manson denies the allegations, which began with a public accusation from actress Evan Rachel Wood. Manson was also dropped by his record label, talent agent, and manager.

The downfall of actor Armie Hammer was initially treated like a joke by many commentators, as people reacted to rumors that Hammer had a cannibalism kink. However, this rumor took a darker turn with allegations of sexual violence and intimate partner abuse. Since these allegations came to light in January and February, Hammer has been dropped from all of his upcoming movie projects, and Disney has quietly delayed the release of the film Death on the Nile, which features Hammer in a co-lead role.

The death of cinematographer Halyna Hutchins shook the film industry this October, after she was shot and killed while working on the indie film Rust. Actor Alec Baldwin was holding the gun at the time, and since he was also a producer on the film, he was widely blamed for Hutchins’ death. The specifics of the accident are still being investigated, but many people connected Hutchins’ death with ongoing safety issues in the industry. Rust‘s producers were accused of cutting corners and overworking their staff, with Baldwin as the public face of the scandal.

The Astroworld music festival was the site of a shocking tragedy this year, as ten people were crushed to death in the audience of a Travis Scott concert. Social media posts show fans begging to halt the show, and Scott was heavily criticized for failing to stop performing while people were being injured in the crowd.

Experts have described these deaths as “preventable,” and many people lay the blame on Scott for mishandling the situation. He claims that he didn’t realize people were in serious danger at the time, but there’s a widespread perception that he is trying to avoid responsibility. In particular, people were scandalized by Scott’s announcement of a deal with the therapy app BetterHelp, offering a month’s free membership to Astroworld survivors. Celebrity crisis PR can only go so far, and this was not an appropriate time for a brand partnership.

The post The top 12 celebrity cancellations of 2021 appeared first on The Daily Dot.