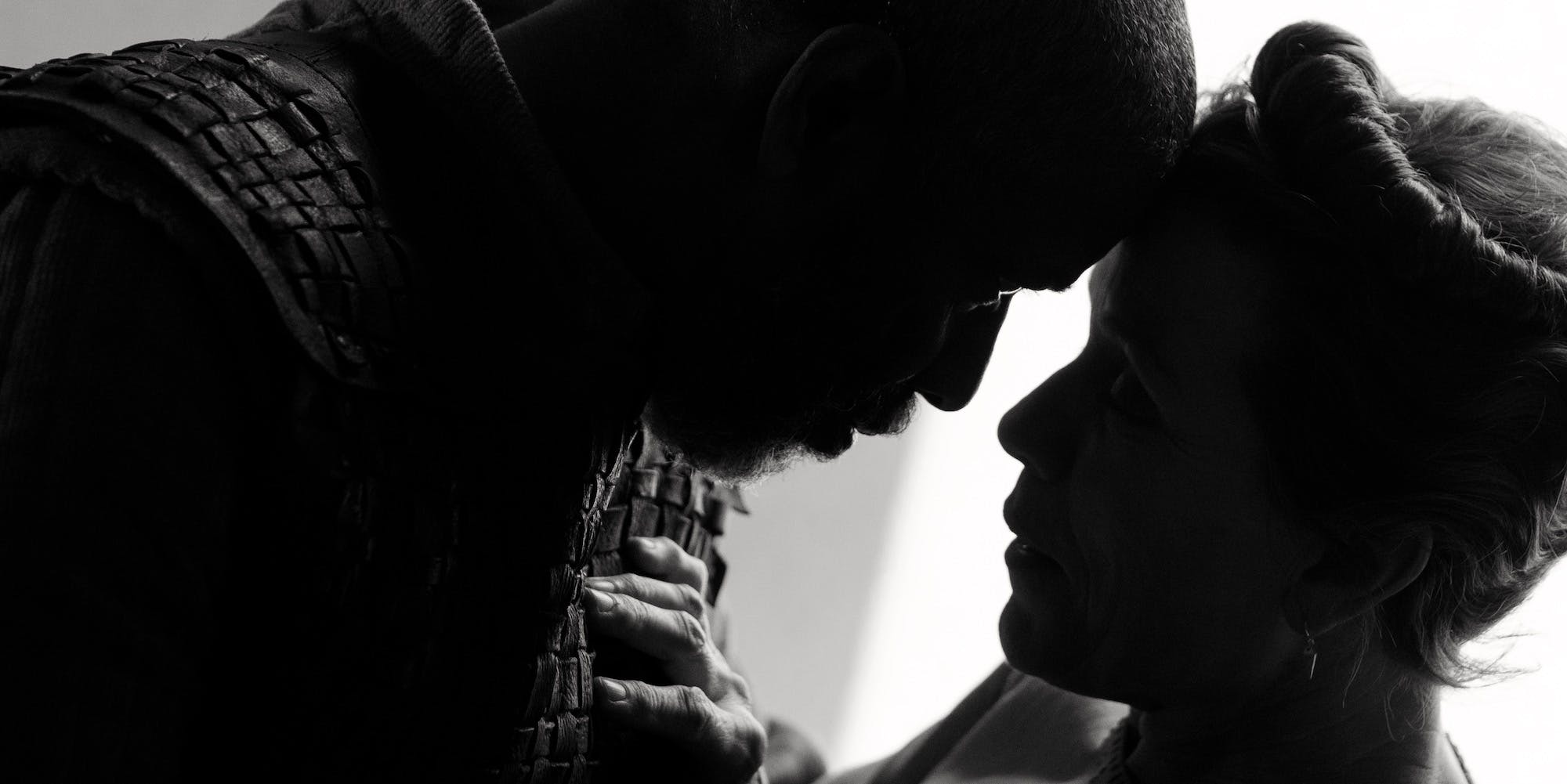 Macbeth, like many of William Shakespeare’s famous plays, has been adapted and brought to life in just about every way imaginable. It’s been performed on the stage, produced as an audio drama, and referenced in art and literature. The story has traveled well beyond Scotland, and filmmakers have been adapting it for more than 100 years—Akira Kurosawa, Roman Polanski, Orson Welles, Laurence Olivier, and Justin Kurzel are just a few of the many who’ve tried.

Joel Coen, in his first film without his brother and frequent collaborator Ethan Coen, is the latest to tackle the Scottish play. For all of its intricacies, The Tragedy of Macbeth is a breathtaking, grim, and minimalist playground that puts all of the onus on its players—a blend of some of the world’s biggest actors, character actors, Shakespearean vets, and rising stars who use their normal accents (versus trying their hand at a Scottish accent); like Chernobyl, it doesn’t hurt the film—all of whom step up to the challenge. Even when you know exactly how it ends (and, minor spoiler alert, Shakespeare’s tragedies tend to end a certain way), the building tension still works in brilliantly devastating ways.

The Tragedy of Macbeth

RELEASE DATE: Dec. 25, 2021 (theatrical); January 14, 2022 (streaming)
DIRECTOR: Joel Coen
STREAMING: Apple TV+
In an adaptation that blends the lines between film and the stage, Joel Coen’s more minimalist (and black-and-white) take on the Shakespearean tragedy is a gripping slow-burn. With memorable supporting turns from the cast including Kathryn Hunter, Corey Hawkins, and Moses Ingram, it’s Denzel Washington and Frances McDormand’s film all the way.

In the hands of Coen, cinematographer Bruno Delbonnel, and production designer Stefan Dechant, The Tragedy of Macbeth’s Scotland sometimes feels like a mystical and barren wasteland. Every set for the film was built and filmed on soundstages, and it doesn’t attempt to hide the fact that it wasn’t shot that way. At one point, a starry sky looks like how one would stage a starry sky on the stage. In another shot, the moon transforms into a spotlight that one of its actors walks straight into the middle of; there are only as many props as necessary. A striking door handle looks uncannily like one of the many daggers that will be used to carry out a most devious plot, and immediately after a kill, droplets of blood start to drip onto the floor akin to a ticking clock.

Although Macbeth is Shakespeare’s shortest tragedy, Coen’s script cuts it even further. But the end result is sharp and crisp. Once the blood starts flowing, the tension never relents.

The basic premise remains unchanged: Macbeth (Denzel Washington), a general in the army of King Duncan (Brendan Gleeson), is told of a prophecy by three witches (all of whom are played by Kathryn Hunter, who gives a contortionist physicality to the role) that he will be appointed the Thane of Cawdor before he becomes king himself. Sure enough, he becomes the Thane of Cawdor, but Duncan instead names his son Malcolm (Harry Melling) his heir. Upon arriving home, Macbeth’s wife, Lady Macbeth (Frances McDormand) suggests that they take fate into their own hands.

Washington and McDormand (the latter who previously played Lady Macbeth on the stage in 2016) stepping into roles that, in many recent iterations, have often been played by much younger actors, immediately changes the dynamic. They’re no longer the young, power-hungry couple willing to do whatever it takes to seize the crown. Now, they’re the people who, amid years of pain (in one scene, Lady Macbeth makes mention of the baby she lost that she was able to nurse), spent a lifetime serving others and are finally taking the vague opportunity that the prophecy offers them. You could even say that in the case of the Macbeths, the couple that plots to seize the Scottish throne together, stays together.

It’s clear that when Malcolm flees and Macbeth successfully sits upon the Scottish throne, The Tragedy of Macbeth uses nightmarish imagery to illustrate that mess that Macbeth and Lady Macbeth have created for themselves. Banquo (Bertie Carvel), who witnessed the witches’ prophecy and became one of Macbeth’s victims, haunts him at a feast; Lady Macbeth starts sleepwalking. They’re plagued by their sins, they’re becoming increasingly paranoid, and they have blood on their hands that scrubbing them won’t wash away—they won, but at what cost?

Washington and McDormand, both of whom already have had a career full of top-tier performances, are firing on all cylinders. They both make the material feel fresh, and the subtleties stand out just as much as their characters’ hysterics. Corey Hawkins embodies Macduff’s grief and rage when pushed to the brink. Moses Ingram, who received an Emmy nomination for The Queen’s Gambit, is striking in her lone scene as Lady Macduff. Even Stephen Root, in a brief appearance as the Porter, makes his mark.

“I have lived long enough,” Macbeth says wearily as it becomes clearer that the murderous plot to seize the Scottish throne will ultimately lead to his doom. But when you’ve already thrown so much of your life away for power and the crown, what’s one more body or the reach of a hand?

The post ‘The Tragedy of Macbeth’ takes a minimalist approach to full effect appeared first on The Daily Dot.

‘I don’t think horses are the problem:’ Biden administration mocked for banning horses in response to Border Patrol footage
‘How do you copy something … and make it so deeply unfunny’: TikToker blasted for stealing a Black creator’s character
Advertisement