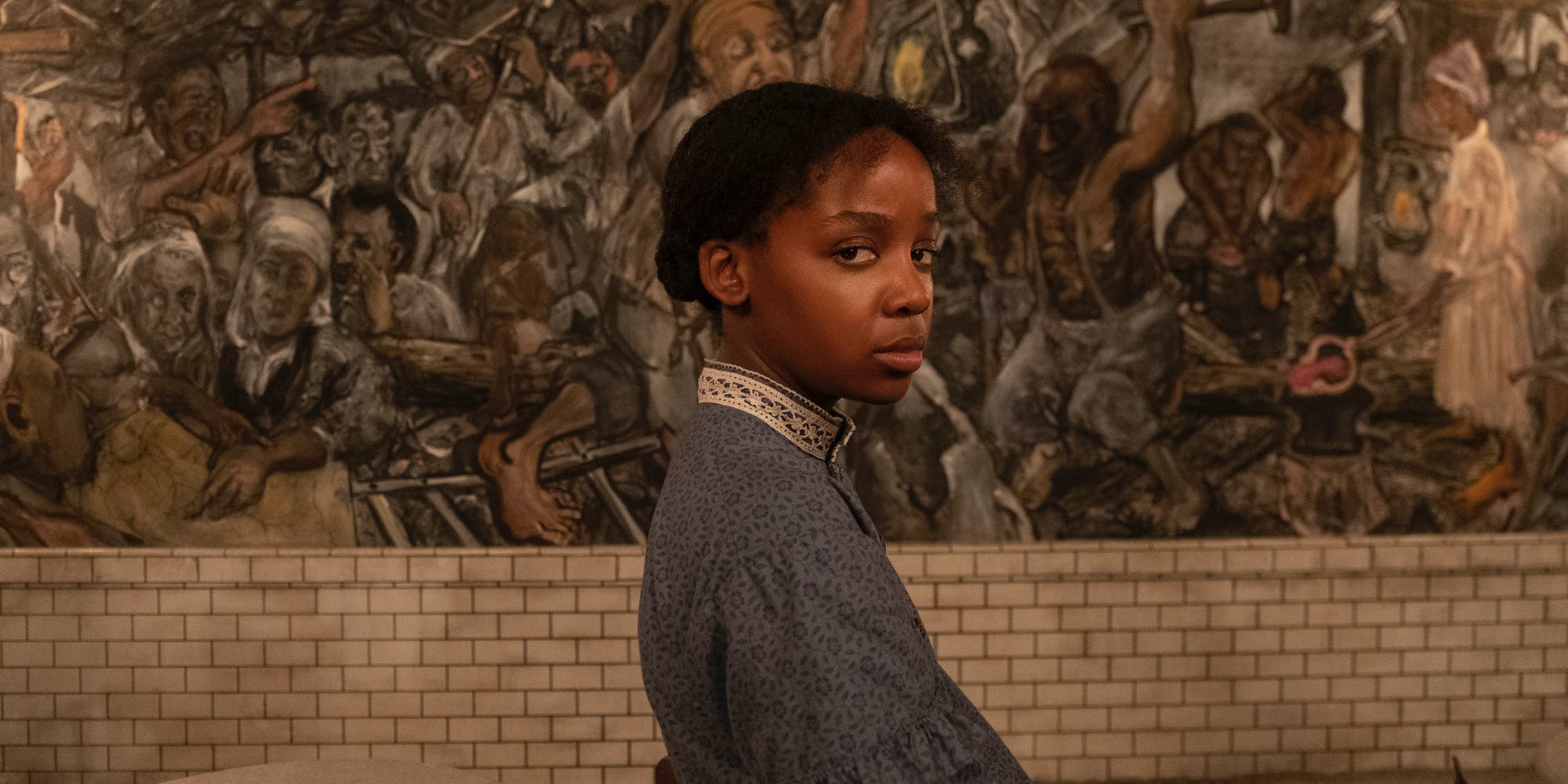 The Underground Railroad is not an easy watch. Sitting at 10 episodes, Barry Jenkins (who directed every episode and wrote or co-wrote several of them) doesn’t shy away from depicting the trauma or violence faced by the characters in Colson Whitehead’s Pulitzer Prize-winning novel. That violence, both intentional and incidental, is often brutal and tough to sit through, particularly as white slave owners and their guests casually watch it take place. The aftermath of what these characters see and experience stays with them long after the physical scars have healed.

Release Date: May 14, 2021
Creator: Barry Jenkins
Streaming: Amazon Prime Video
Based on Colson Whitehead’s Pulitzer Prize-winning novel, Barry Jenkins’ 10-episode limited series is an ethereal and unflinching chronicle of one woman’s journey toward freedom on the Underground Railroad, which is a literal railroad that transports runaways. It’s an incredible adaptation, one which is elevated by its performances, the visuals, and the score.

As much as that violence is a reality in the lives of Cora (Thuso Mbedu), Caesar (Aaron Pierre), and the slaves who live on the Georgia plantation they eventually escape from, The Underground Railroad is also incredibly restrained in what it depicts as it lingers in those moments of levity; it’s not a show that depicts trauma for trauma’s sake. Those 10 episodes—and in the age of the “blank-hour movie” descriptor used by some film auteurs, there’s no mistaking that The Underground Railroad is television—gives viewers ample room to breathe. With the kind of stunning visual cues that are familiar from many of Jenkins and cinematographer James Laxton’s previous collaborations (Moonlight, If Beale Street Could Talk) to capture the grand scope of its story, The Underground Railroad never makes you forget about the humanity of its characters.

Some of that comes through a series of tableaux of its actors staring straight into the camera as they stand in the cotton fields on a plantation, in a town, or on a farm. Sometimes, those shots are used as a transition or a reminder, documentation of that particular moment in time or what’s been left behind. Jenkins and Laxton shot far more than they could fit into The Underground Railroad, much of which can be viewed in a video Jenkins posted earlier this week. In those moments, they demand that we look.

It also comes in the story itself. Cora is the unlikely heroine, someone who’s initially reluctant to leave when Caesar offers to take her with him on the Underground Railroad, but she changes her mind after witnessing more callous atrocities (on top of a lifetime of them, some of which are hinted at or shown in brief flashes when other shows and films would draw them out). She’s wary of everything she encounters and is constantly waiting for the other shoe to drop, even as the people around her might assure her otherwise. Some of it is in good faith while other instances have an air of naïveté to them; there’s no pure white savior in this story.

But Cora has good reason to constantly look behind her back; even in times of relative calm, you can see the conflict painted on Mbedu’s face. And she’s still plagued by the memory of her mother Mabel (Sheila Atim), who left Cora behind when she escaped a decade before the show begins and whose perceived presence haunts her like a specter.

Every step of Cora’s journey offers its own set of trials and tribulations. South Carolina offers refuge, a chance at education, and proper medical care for runaways, but it comes at the price of being subjected to horrific experiments and eugenics procedures. North Carolina abolished slavery, but it also outlawed Black people in the state entirely with almost certain death for both Black people caught hiding and the white people who harbor them; an eerie “Freedom Trail” of dead bodies strung to trees leads into town, a warning for anybody who dares defy the law. (“The savagery a man is capable of whenever he believes his cause to be just,” one of the people who helps Cora laments.)

Tennessee is an endless inferno, an indication of just how a racist society will harm itself just to ensure that Black and Indigenous people can’t use the land either. And Indiana offers hope and stability, particularly from Royal (William Jackson Harper), a freed Black man who Cora becomes close to during her time there, but even that utopia isn’t immune from internal and external threats.

No two stops of the Underground Railroad, which is a literal railroad with different routes that don’t all connect together, stations, and conductors, is the same. In the deep South, it’s little more than a cave, one that a conductor might collapse if it proves to be too risky to continue operating. Further north, the station might be adorned with tiles or have all of the touchstones of a station that would be right at home with other 19th century counterparts. The price of admission on any train isn’t in money but in a person’s life story that is dictated or written into a book of testimonials—an assurance that their stories will live on long after they’ve entered the station.

At nearly every turn, Cora’s own twisted Javert in the form of the slave catcher Ridgeway (Joel Edgerton) is on her trail. With a young Black boy named Homer (Chase W. Dillon) by his side, Ridgeway is attempting to bring her back to Georgia, a job that’s made to be much more personal by the fact that Mabel is the only person to evade his capture. Cora fascinates Ridgeway as he continually denies her humanity, allowing him to voice things he likely doesn’t say to many people or boast of his efforts. But the scripts from Jenkins and his writers don’t attempt to make us sympathize with him, although he does get an episode that operates like an origin story. In Edgerton’s hands, Ridgeway is monstrous in ways we might not expect (alongside many of the ways we do) with a matter-of-fact gruffness that lends itself to a portrait full of contradictions.

In-between the bigger setpieces of the series are long stretches where the cameras capture visuals, both in the reality and in dream-like sequences (one we keep coming back to is one where Cora is falling through a hole in the ground in slow-motion with a ladder beside her), that almost feels surreal. There are stretches of characters walking through the woods, experiencing the day-to-day of a town. There are moments of utter happiness, the camera capturing the scope of a feast shared between a newly forged family or the pleasures of a Sunday social. The terror that threatens to burst Cora’s bubble time and again comes in Jenkins’ direction, in the editing, in the haunting score from composer Nicholas Britell (as well as offers some reprieve), and even in the buzzing of cicadas that threaten to overtake everything. The devil is in the details, and The Underground Railroad uses every bit of detail it can grasp.

If there’s a major sore spot, it’s on the release of The Underground Railroad itself. Amazon is putting all 10 episodes out at once, but by no means should you binge it. It’s a show that needs time to breathe and for viewers to process it, and while the shortest episode—which acts as something of an epilogue for one character—stands at just under 20 minutes including credits, most episodes run at least an hour. (For what it’s worth, Jenkins offered his own suggestion of how to space out the episodes.) But The Underground Railroad is also an astounding piece of work that attempts to capture the full scope of slavery, the resilience, and a foundation that tried its damndest to preserve its way of life. It’s not the easiest thing to watch unfold, but we also cannot look away.

All 10 episodes of The Underground Railroad debut on Amazon Prime Video on May 14.

The post ‘The Underground Railroad’ is a technical marvel and an astounding adaptation appeared first on The Daily Dot.

On a day to honor persons who disappeared, Indigenous activists found their Instagram stories gone
‘You’re teaching your kid to hate animals’: ‘Karen’ flips out when man asks her to put dog on leash
Advertisement