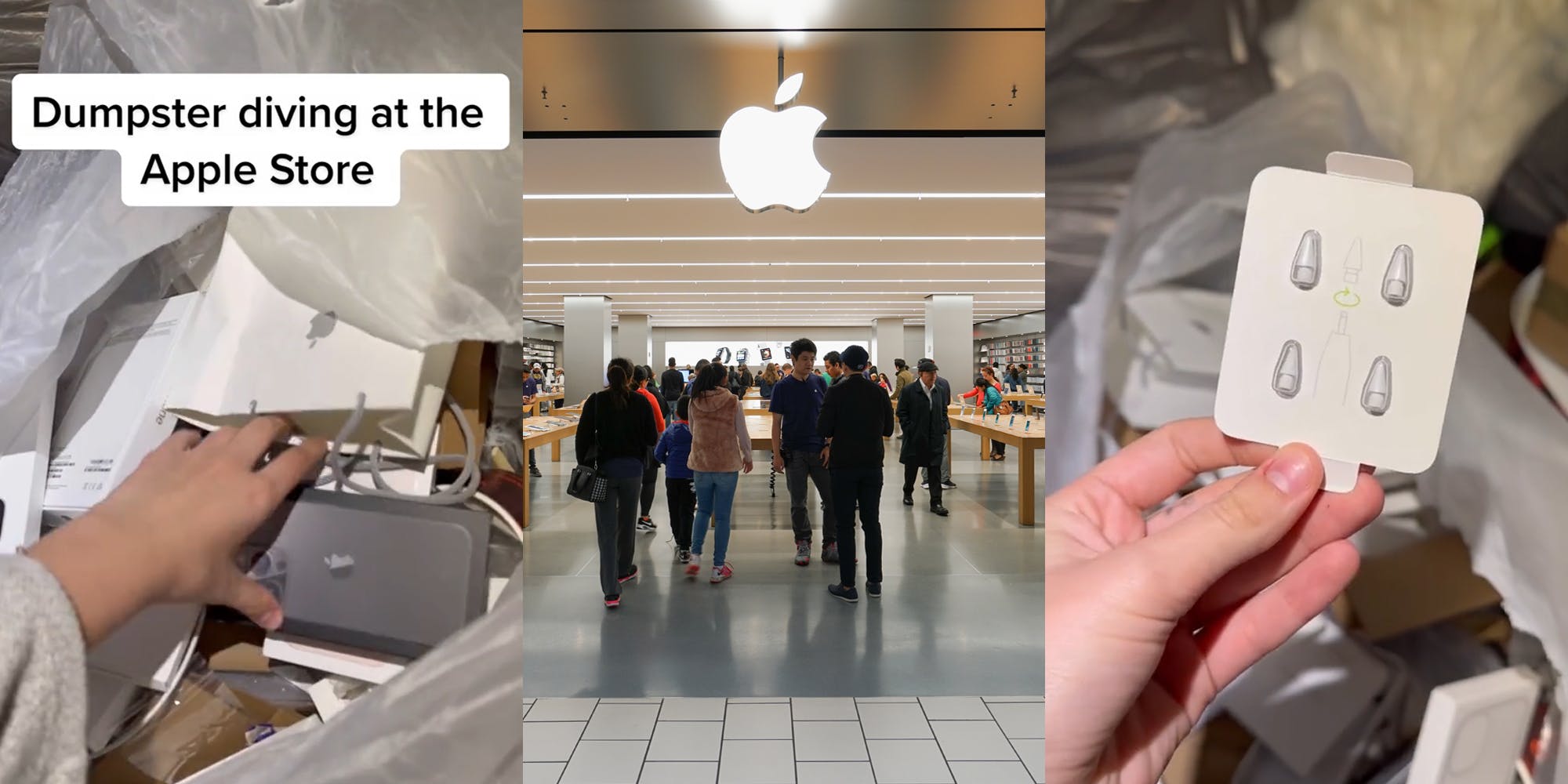 Ella, aka @glamourddive on TikTok, is well known for her dumpster diving videos she posts online. A recent snippet of her time checking out the trash receptacle behind an Apple Store yielded some interesting finds, and gave other users on the platform some ideas of their own.

In the clip, she manages to find a lot of empty product boxes, which you can find for sale in online marketplaces like eBay, along with some seemingly unused product accessories that could also be sold online.

Ella’s first find is an iPhone case that appears unused. She then comes across what appears to be a broken laptop charger. As she’s checking an iPhone box that at first looks empty, she reveals a wound-up new charging cable for an iPhone.

She continues onto an Apple pencil box. “OK, I checked this Apple Pencil box and it actually has them inside,” the TikToker says as she shows the camera four apple pencil tips still packaged. “And they don’t even look used.”

She concludes the video after finding part of an Apple watch band and a bunch of Apple stickers.

@glamourddive They accidentally threw this away.. #apple #dumpsterdiving #free #fyp #glamourddive ♬ Love You So – The King Khan & BBQ Show

There are throngs of people who engage in reselling as either a side hustle or full-time job, and dumpster diving behind popular retail stores could be a good way for folks to boost their income from this endeavor.

Reselling Revealed has compiled some handy tips for folks who are looking to get into the reselling game and listed some outlets/marketplaces folks may want to consider in order to maximize their profits. Items like electronics and clothing are some of the most prized finds when it comes to dumpster diving, as they could potentially yield the highest returns. The outlet also suggested folks go into the trash bins of massive businesses as the larger a company is, the more likely they are to produce waste.

But what percentage of unsold consumer electronics end up in the trash? That appears to vary from business to business. The Verge reported in 2021 that “millions of unsold products” were destroyed by Amazon, suggesting that the online retail giant has adopted an approach similar to Louis Vuitton: the luxury brand reportedly burns goods that they don’t sell instead of just tossing them in the trash. Vogue wrote that the destruction of products in the fashion industry is an “everlasting problem.”

It’s no secret that tech companies are often stuck with millions of units of unsold stock, Apple included. Crast reported that in 2022, the Cupertino-based tech giant had some 50 million unsold iPhones on reserve.

The Daily Dot has reached out to @glamourddive and Apple via email for further comment.

The post ‘They accidentally threw this away’: Woman finds unused Apple products while dumpster diving at Apple Store appeared first on The Daily Dot.