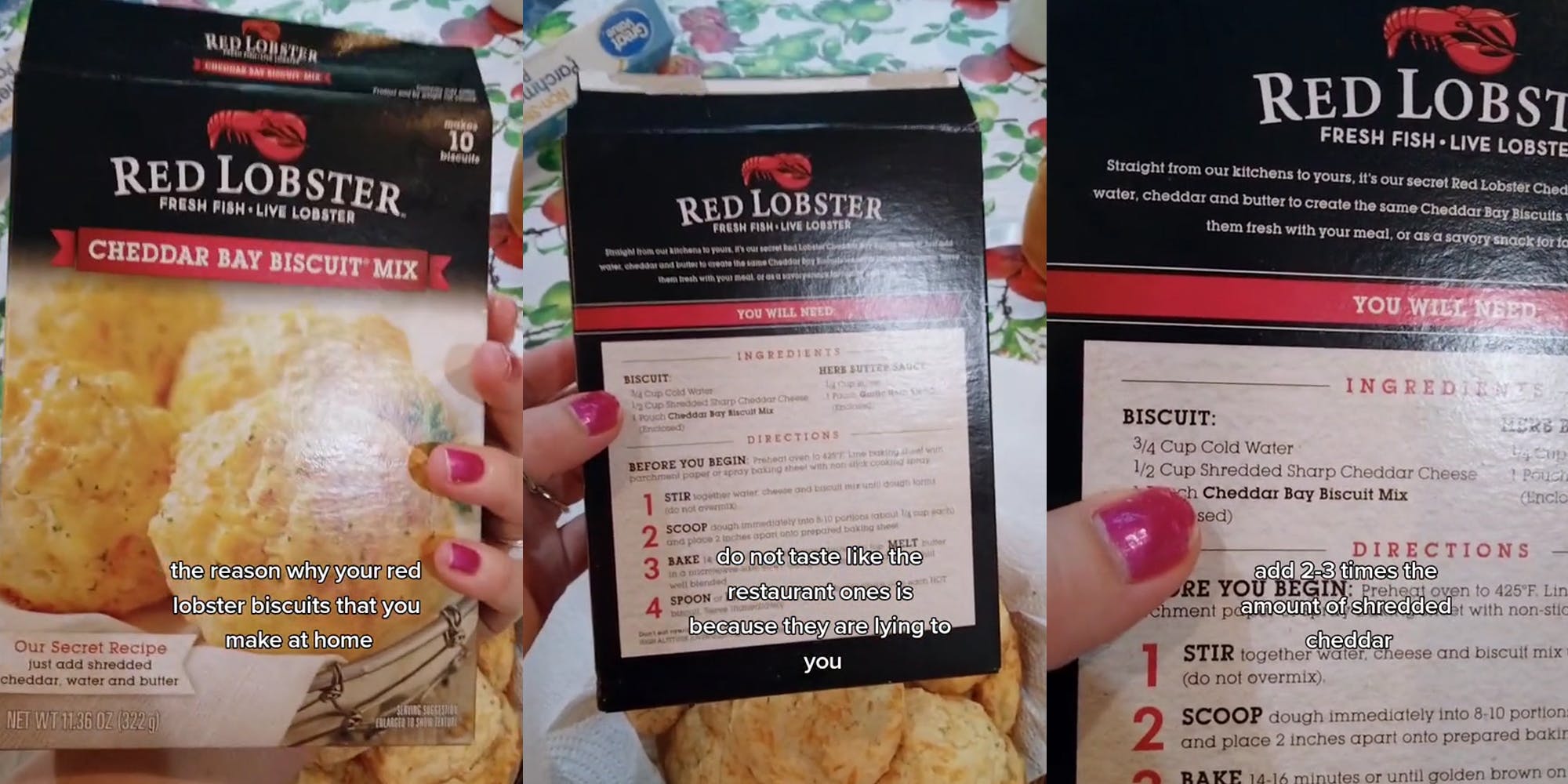 A former Red Lobster kitchen employee went viral on TikTok after revealing why some folks may be disappointed with the Red Lobster Cheddar Bay Biscuits they try making at home.

The biscuits are a beloved staple of the seafood franchise, and the TikToker, Myra (@mermaid_from_space), says the boxed instructions don’t include the appropriate cheese proportions to the dish.

While the recipe calls for 1/2 cup of sharp shredded cheddar cheese, the TikToker says that she learned from firsthand experience that aspiring biscuit-creators should put 3 times that amount. According to Myra, this is the reason folks love the biscuits in-house so much more than the ones they make at home.

“The reason why your Red Lobster biscuits that you make at home do not taste like the restaurant ones is because they are lying to you,” Myra says in the clip.

The TikToker instructs viewers to add at least one cup of shredded cheddar to the recipe in order to recreate restaurant-quality biscuits.

“That is the secret ingredient,” she says. “Add 2-3 times the amount of shredded cheddar. Follow the rest of the recipe to the T and you will have authentic Red Lobster biscuits that are amazing. Happy Holidays y’all.”

Myra’s video has received over 530,000 views since it was posted on Dec. 3. In the comments section, several viewers were surprised to hear about the “lie” on the back of the Cheddar Bay Biscuit box. However, others offered up their own methods of making the popular Red Lobster appetizer at home.

“As well cold water should be ‘ICED WATER'” one user suggested.

Another stated that the type of shredded cheese one uses makes all the difference. “Also… you have to make it with cheese from a block that you shred yourself,” another viewer added. “Pre-shredded is coated in a non-caking agent and dries them out!”

One TikToker claimed they achieved identical results just by eye-balling it. “Mine tasted JUST like them. I didn’t measure the cheese though….I just took a block and started at it,” they shared.

The Daily Dot has reached out to both Myra and Red Lobster via email for further comment.

The post ‘They are lying to you’: Former Red Lobster employee shares PSA on the Cheddar Bay Biscuits appeared first on The Daily Dot.

‘Liquor store casual chic’: People flip out online after John Fetterman named one of 2022 most stylish
‘Nurning? Annintant?’: Everyone is baffled by this ’26yo old nursing assistant’s cryptic TikTok riddle
Advertisement