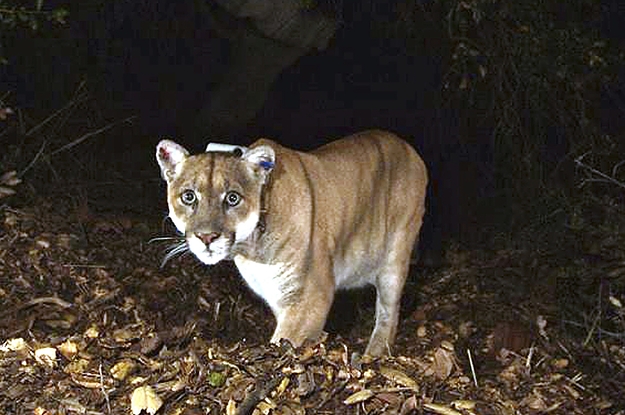 California Gov. Gavin Newsom praised P-22 and his “incredible journey” for inspiring “a new era of conserving and reconnecting nature,” citing the ongoing project to build a wildlife overpass over the 101 to reduce wildlife deaths.

But the most moving tribute of all came from Beth Pratt, a regional executive director of the National Wildlife Federation, which has been instrumental in advocating for the protection of Los Angeles’s big cats.

“I can’t finish this sentence without crying because of the past tense,” Pratt wrote in a post on the famous lion’s Facebook page. “It’s hard to imagine I will be writing about P-22 in the past tense now.”

“I hope his future is filled with endless forests without a car or road in sight and where deer are plentiful,” she continued, “and I hope he finally finds the mate that his island existence denied him his entire life.”

Pratt said she got the opportunity to say bye to the beloved lion in person after never seeing him up close before.

“I sat near him, looking into his eyes for a few minutes, and told him he was a good boy,” she wrote. “I told him how much I loved him. How much the world loved him. And I told him I was so sorry that we did not make the world a safer place for him. I apologized that despite all I and others who cared for him did, we failed him.”

“I don’t have any illusion that my presence or words comforted him,” Pratt continued. “And I left with a great sadness I will carry for the rest of my days.”

The wildlife advocate said as difficult as it was to watch P-22 leave this world she agreed with the officials’ decision to euthanize him, saying it was the responsible and “compassionate” choice to end his suffering.

“Thank you for the gift of knowing you, P-22. I’ll miss you forever,” she wrote. “But I will never stop working to honor your legacy, and although we failed you, we can at least partly atone by making the world safer for your kind.”

You can read the full eulogy here: