This week in streaming: The buzz for ‘Yellowjackets’ – Nogagames 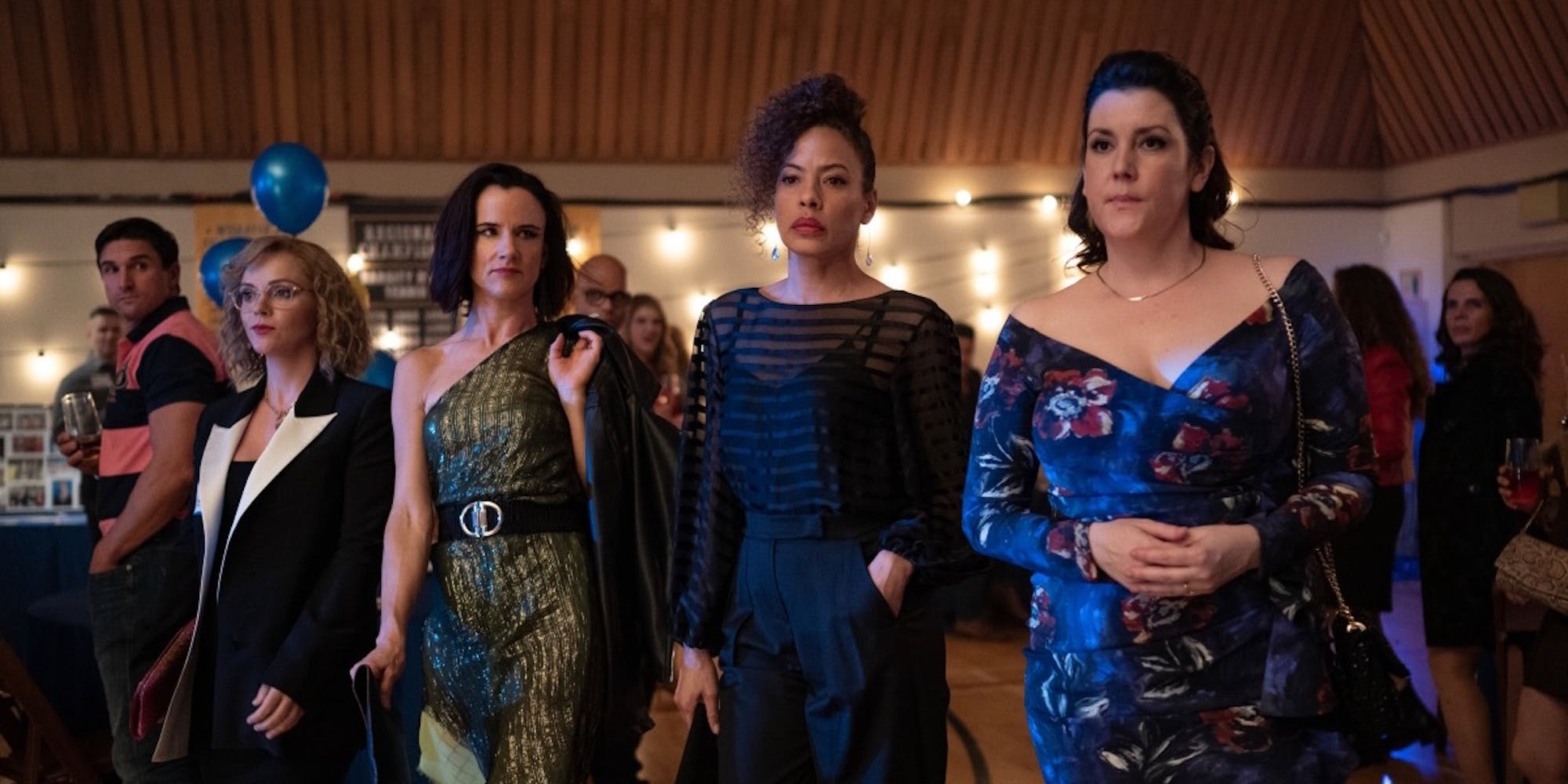 Welcome to the Wednesday edition of Internet Insider, where we tell you what you should be watching this week.

It’s the perfect time to join the Yellowjackets hive

Between the TV I wrote about and the stuff I sought out on my own time, I watched a lot of television last year. Some of it was terrible, some of it was fine, and some of it was great. But nothing captivated my attention like Showtime’s Yellowjackets, which concluded its first season on Sunday. I already recommended the series as part of the Daily Dot’s best-of-streaming list a few weeks ago while the show was still airing. Now that the season is over, I want to talk about Yellowjackets again.

The series—which is from Ashley Lyle, Bart Nickerson, and Jonathan Lisco—is two stories running parallel. One half is a mix of Lost, Lord of the Flies, and elements that may or may not be supernatural as it centers on a New Jersey high school girls’ soccer team in 1996 whose plane crashes in the Canadian wilderness, where they would spend the next 19 months trying to survive. The other half is more aligned with our current wave of prestige TV dramas featuring survivors trying to keep darker elements of their past hidden; this one happens to be filled with beloved actresses from the ’90s Melanie Lynskey, Juliette Lewis, and Christina Ricci. You might end up favoring one half over the other, but both are fascinating in their own ways (and are held together by the connection between the two sets of actors playing these characters). As you’d expect, it has an incredible ’90s soundtrack.

Ritualistic cannibalism is teased in the show’s opening minutes, and throughout the 10-episode season, the characters of Yellowjackets have to deal with blackmail, kidnapping, séances, secrets, young love, people whose identities are a mystery, dealing with menstruation while out in the wilderness (Lost would never), the occult, someone known to us as the Antler Queen, and a looming high school reunion. We’re picking apart every detail—the show’s subreddit was a central hub over the past 10 weeks—and people are already eagerly fancasting at least one character who we now know will have a 2021 counterpart. (To fit the meta-commentary of Lynskey, Lewis, and Ricci’s casting, they’re leaning toward other actresses who came of age during the ’90s.) The show’s rise has been a boon for Showtime, which renewed it for a second season a few weeks ago—the creators originally pitched it as a five-season show—and it’s aiming to return by the end of 2022.

I found myself gravitating towards other elements of Yellowjackets, too. Even though I’m generally a theory person, I didn’t mind that Yellowjackets didn’t try to pull one over me as shows like Westworld have continually done; the answers we got were pretty straightforward. I love its Jersey sensibilities, the fact that it spends time working through these characters’ trauma vs. being a show that’s “about” trauma, and I love that every day, more people are discovering it. It’s prime for memes, and I’m still thinking of Jeff’s (Warren Kole) line reading of “There’s no book club?!” from episode 9. It’s the journey (how and why the soccer team resorts to cannibalism), not the destination (resorting to cannibalism). And the final shot of season 1 had me wanting season 2 immediately. The show might crash and burn before the end, but right now? It’s the anticipation that has me excited.

Not bad for a show that was, in part, sparked by the backlash to reports of an all-girl Lord of the Flies movie, which was based around disbelief that girls could ever be as vicious or uncouth as boys.

Give back while getting cozy with Bombas

Who wants to give up space in their dresser for uncomfortable clothes? That’s why Bombas created the most comfortable apparel, from socks to underwear and T-shirts, made from the highest-quality materials and designed to make everything you do cozier.

Plus, since they believe everyone deserves clean, comfortable clothing, Bombas donates an item for every purchase to those experiencing homelessness. Shop today and get 20% off your first order with COMFORT20, plus free shipping with orders $50+.

Drawing inspiration from 20th-century occultism, paranormal phenomena, and investigatory podcasts like Serial, Archive 81 shares a lot of DNA with audio dramas like The Black Tapes, Limetown (also adapted for TV), and The Magnus Archives. It’s a popular subgenre, but this adaptation suffers from sticking too close to the original format.

Dan (Mamoudou Athie) spends far too much time watching and reacting to video footage, an uphill struggle for a lead actor. Meanwhile, Melody (Dina Shihabi) has to carry her camcorder in virtually every scene because we’re only meant to see things she personally filmed. Several other characters also record helpful clues for Dan to discover, straining credulity in an era before smartphones.

By episode five or six, Dan’s investigation begins to feel like a point-and-click video game, relying on a constant stream of environmental storytelling as he watches new video clips, discovers hidden rooms in his house, and so on. When further exposition is required, his loyal BFF Mark (Matt McGorry) invariably phones up with a fresh clue: Another amusing fictional conceit because what kind of millennial always calls instead of sending a text?

Archive 81 may actually work better if you’re not familiar with this style of podcast. Format problems aside, it’s better paced than most Netflix shows, combining mystery thriller cliffhangers with some effective horror direction. There’s also a strong supporting cast among the inhabitants of the Visser Building and a finale that wraps things up.

Hulu’s How I Met Your Father, which debuts nearly eight years after its predecessor, the CBS sitcom How I Met Your Mother, went off the air, comes ready to play with a lot of baggage. While the series was popular throughout its run, HIMYM is remembered more for an ending that may have hued close to its original vision but burned its audience in the process. It also, sight unseen, reminds us that HIMYM creators Craig Thomas and Carter Bays once tried making a gender-flipped spinoff (and even shot a pilot starring Greta Gerwig) that was never picked up. (Thomas and Bays are attached to HIMYF as executive producers.)

Creators Isaac Aptaker and Elizabeth Berger (Love, Simon; This Is Us) tweak the format along the way—dating apps are a natural part of things, for instance—and the show’s version of New York is a lot more inclusive than its predecessor ever was. But the baggage is heavy, and in the first four episodes provided to critics, HIMYF struggles with that weight. The cast is full of mostly likable characters, but they struggle to gel together, and while most of the show may take place in a COVID-free 2022, the show feels dated by several years.

The first two episodes of How I Met Your Father are now streaming on Hulu. —M.J.

Now Playing: “Do Ya Wanna Taste It” by Wig Wam

The post This week in streaming: The buzz for ‘Yellowjackets’ appeared first on The Daily Dot.

A ‘tyrannical narcissistic boss’: Charisma Carpenter responds to Joss Whedon’s comments about his workplace abuse allegations
People are imagining themselves at ‘Euphoria High School’ in this new meme
Advertisement