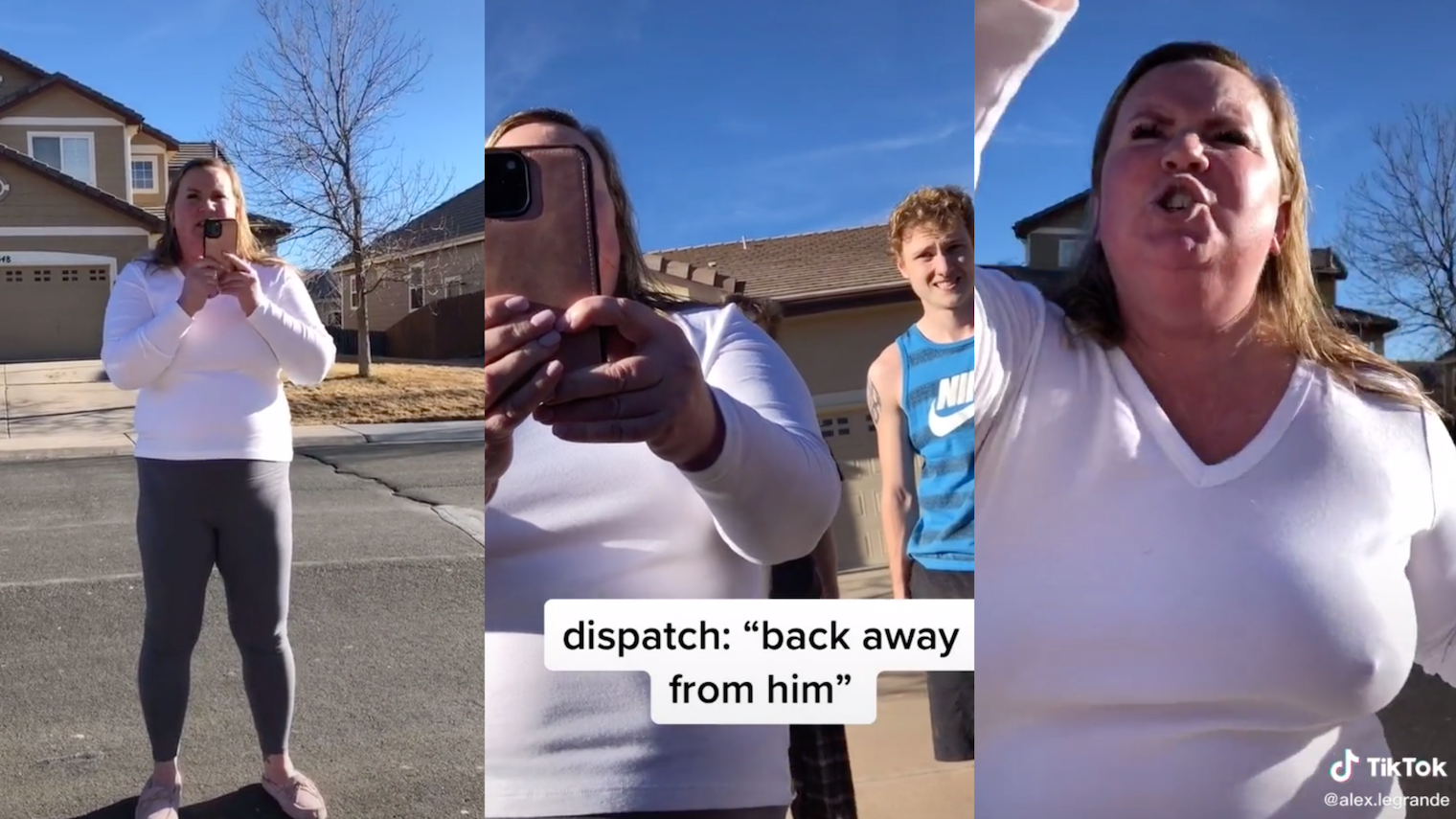 A TikTok video went viral Tuesday for showing a woman dubbed a “Karen” calling the police on a teenager who was teaching his girlfriend how to drive a manual car.

“He’s pulled over here, trying to talk shit to us,” the woman says on the phone. “He’s a little punk and I’m going to have a few people come out of their houses because this kid has been causing this problem and the noise all the time.”

Alex LeGrande, @alex.legrande on TikTok, responds, “I never even drive up this street.”

The video goes on to show the woman standing with two boys behind her, still on the phone with the police. The taller boy, who’s sporting a blue-striped Nike tank top, says in a mocking tone to Alex, “Take a video.” The woman then appears to start filming, as well, and steps closer to Alex.

“Back away from my son,” says Alex’s mom, who was there to film the driving lesson.

The emergency dispatcher tells the woman to get away from Alex. “You need to listen to me,” the dispatcher says. “Get away from him.” But the woman continues filming. “No, we’re just videoing each other because he’s a little shit,” the woman says.

In a follow-up video, Alex and his girlfriend explain that the woman and the boys came out of their house and complained about the noise from revving up the car.

Many TikTok users jumped to Alex and his girlfriend’s defense.

“Even dispatch had your back,” TikTok user @d1bongo wrote. Alex replied, “Yeah [for real] cuz I did NOTHING wrong.”

Other commenters made disparaging comments about the woman’s clothing and weight or expressed concern about the girlfriend, who can be seen making a sad face at the end of the video.

TikTok user @jesuislatempete commented that Alex was actually exposing himself as a punk and liar and told him to “do better.”

“He is one of the obnoxious spoiled entitled thugs racing up and down streets annoying the shit out of everyone,” @jesuislatempete commented. ‘“Wrong in ‘Karen’ battle.’”

Another TikTok video on Alex’s account shows him starting the engine of a red Hellcat parked inside an open garage door.

“Well, 7am,” Alex says. The camera pans to show the neighborhood as the engine rumbles loudly.

TikTok user @calebelliottt commented, “No need for your neighbors to set an alarm clock,” in which Alex replied with, “right!! I’m doing them a favor.”

The “Karen” video has amassed more than 5 million views and 1 million likes. Alex said there is currently an open investigation but was told by the police that he had done nothing wrong.

‘I would feel so safe as your patient’: People are stanning this TikTok doctor after video goes viral
People stan the waiter who ‘tricked’ Chrissy Teigen into buying $13K wine
Advertisement