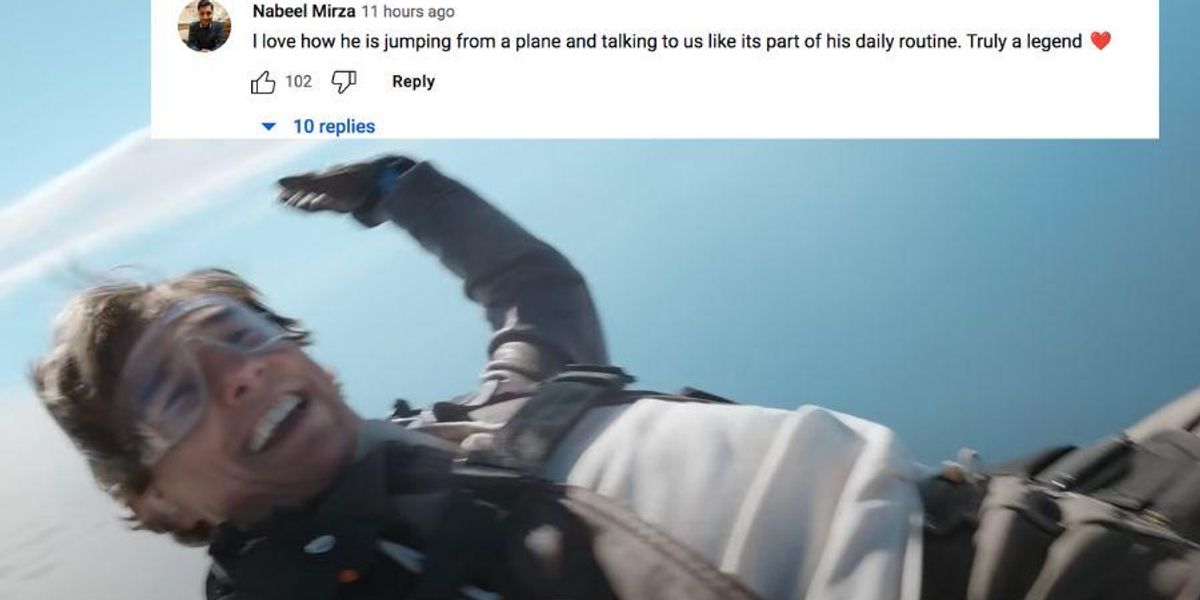 Only Tom Cruise can take a death-defying stunt and somehow make it incredibly wholesome.

On Dec 18, Cruise released a video while on the set of “Mission: Impossible—Dead Reckoning Part One.” By “on set,” I mean he was thousands of feet above Earth looking down at a beach in South Africa.

The action star used the moment to share some love with fans of another high-octane franchise. And he did it in the most epic, yet charming, way imaginable that, let’s be honest, only Tom Cruise could pull off.

“I didn’t want the year to end without thanking you all for coming out to the theaters, and thank you for supporting Top Gun: Maverick,” he yells at the top of his lungs. He then proceeded to skydive while continuing his “thank-you.”

“Where was I? Oh yeah, thank you!” he quipped. “Thank you for allowing us to entertain you. It truly is the honor of a lifetime.”

He signed off by saying, “Happy holidays … we’ll see you at the movies,” before spinning away through the sky.

The fact that he chose to acknowledge the audience who helped make that achievement possible endeared him to people even more.

“This was such a heartwarming message! Thank you for caring for and respecting your audience, Tom! That’s why the people love you. Love Top Gun Maverick!” wrote one person.

Another added, “Not going to lie, Tom Cruise paying his respect to the audience who supports him got me tearing up a little. Appreciate those who acknowledge their audience and supporters.”

Others were just amazed at Cruise’s amount of chill during the whole thing.

“l love how he is jumping from a plane and talking to us like its part of his daily routine. Truly a legend,” commented one person.

Seriously, for a dude thousands of feet up in the air, he remains undeniably down to earth throughout the video.

Over the same weekend, Cruise released another video showcasing nearly 10 minutes of wild behind-the-scenes footage of a stunt in the upcoming “Mission: Impossible—Dead Reckoning Part One.”

In what he calls “the biggest stunt in cinematic history,” Cruise rides a motorcycle off a cliff and then turns it into a BASE jump.

It took years of preparation and training, but as he would tell you—it was all well worth it.

“It all comes down to one thing—the audience,” he says in the clip.

Cruise’s dedication to his craft—and to his fans—makes his movies stand out in a sea of CGI-filled blockbusters. He brings a certain level of magic, intensity, fearlessness and (most of all) love to everything he does. That kind of commitment is impactful whether you’re jumping out of airplanes or simply existing as a mere mortal.

Op-ed: Fermentation, the unsung hero of the cooking oil industry
28-year-old buys cruise ship apartment because it’s less than renting and he can see the world
Advertisement