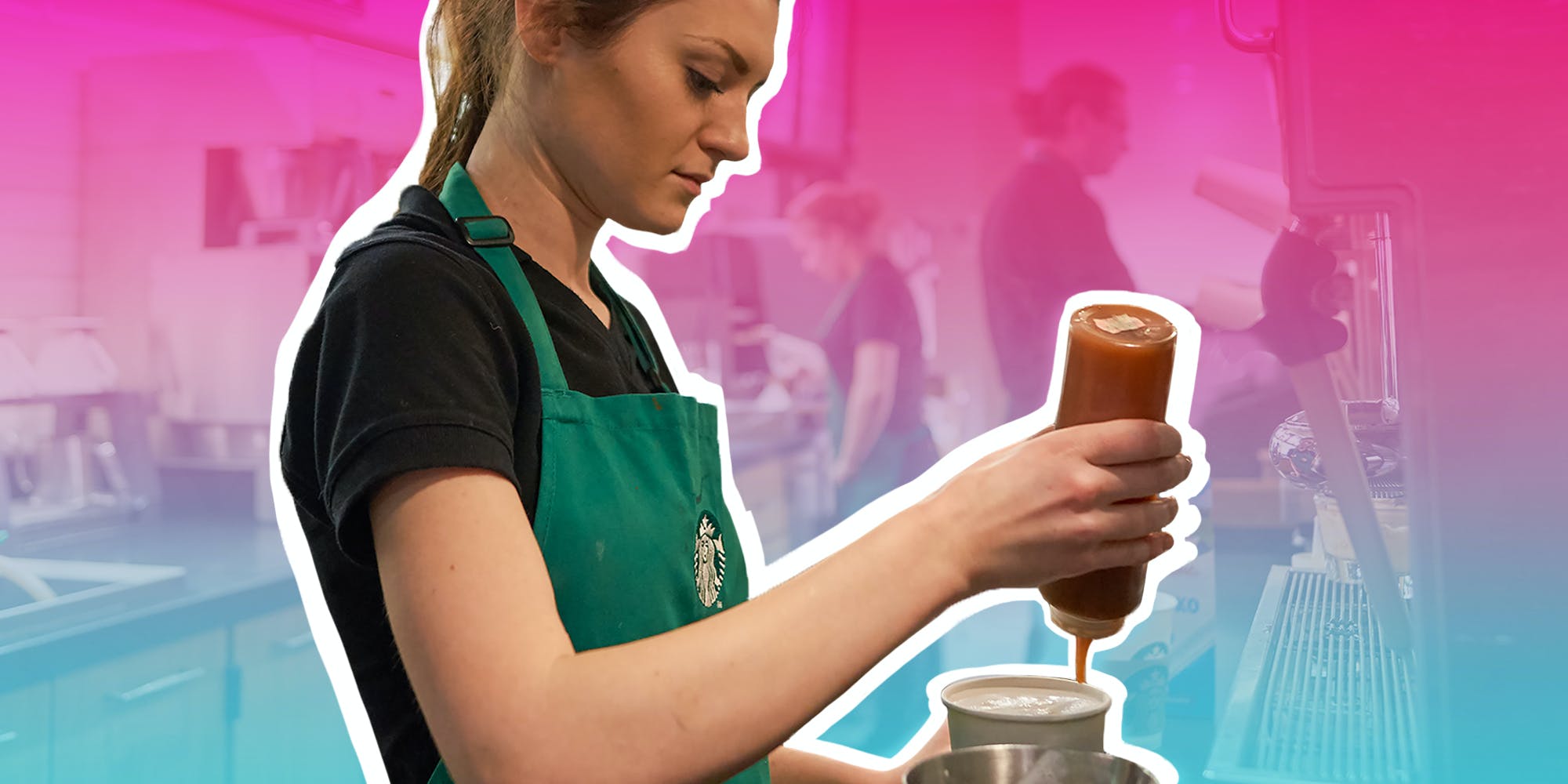 In 2022, cash-strapped and creative customers flocked to TikTok to share their money-saving hacks with other viewers who wanted to save a few bucks on their daily Starbucks orders or post-workout Chipotle bowls.

Although these tricks are a godsend for customers, workers are speaking out against some viral hacks and saying that they make their job difficult or even risk getting them in trouble.

Here are the top 10 customer hacks to avoid if you want to stay off your local customer service workers’ naughty list.

McDonald’s actually advertised this limited-time menu hack that combines a Big Mac, Filet-o-Fish, and McChicken, but customers fail to read the website’s fine print: You have to “make it yourself.” Customers can order the burger “by name” but should expect to receive three separate sandwiches in their takeaway packages. The new menu item has gone viral since its addition to the McDonald’s menu, with #landairseaburger garnering over 1.7 million views on TikTok this year.

Since its arrival on the McDonald’s menu in late January, customers have been blowing up at workers for not assembling the concoction as advertised on the website. In February, the Daily Dot reported on a TikToker’s husband who called corporate to complain about the meal’s DIY assembly requirements.

In the TikTok, the man asks for a “refund,” blasting the McDonald’s customer service representative and saying, “If I wanted to make my own sandwich, I would have stayed home and made my own sandwich.”

While you can find this cheesier take on a classic at restaurants like Wayback Burgers, TikTokers have popularized a secret menu hack to combine Five Guys’ famous cheeseburger with another one of their menu offerings: a grilled cheese sandwich. If done correctly, this creation features crispy, grilled cheese-style bread with a patty and cheese on the inside, making it irresistible to food bloggers.

Since the hack gained rapid popularity in October, #grilledcheesecheeseburger has reached over 964,000 views on TikTok.

However, Five Guys workers are asking customers to refrain from “annoying” secret menu hacks that make food prep tedious. In a now-deleted TikTok, one worker says the influx of customized burgers makes him “mad,” asking viewers to “put an end” to the viral hack.

For customers trying to reduce their weekly coffee bill, ordering a bare-boned drink with a couple of inclusions is a tempting way to save some money on their go-to Starbucks latte order. One viral hack suggests that Starbucks patrons order an “espresso over ice” with milk to reduce the cost of a typical “iced latte” order.

While this money-saving trick was first introduced in January by TikToker @thebrattylibra in a now-deleted video, Starbucks baristas have pushed back and said that the hack creates extra work for them and can even risk their jobs.

Can these baristas ever catch a break? From the now-staple Pink Drink craze to the creation of a whole database of Starbucks secret menu items, this year’s beverage of choice to torment baristas is the “TikTok Drink.” Named after its place of conception, the TikTok Drink is “a white chocolate mocha with salted caramel cold foam and drizzle,” which some have described as “sickeningly sweet.” And baristas are sick of it, too.

The hashtag #tiktokdrinkstarbucks has garnered over 25.5 million views and features popular creators reviewing the secret menu item, but the drink is leaving baristas divided.

In the comments of a TikTok Drink tutorial by a Starbucks worker with over 933,000 likes, other baristas put her on blast for encouraging customers to order the overly customized drink.

“I work at Starbucks & I hate TikTok for promoting this drink,” one commenter wrote.

“Why would you do this to other baristas,” another said.

No one likes biting into a burrito and getting a mouthful of one ingredient—especially when you’ve paid a premium to get all of the fixings added to your Chipotle order. One TikToker suggested that customers remedy this common frustration by asking the Chipotle worker to “mix” the burrito ingredients in a takeaway container before adding them to create a more even distribution of ingredients.

Ingenius? Definitely. But Chipotle workers are frustrated with the added work.

In the comments of a viral TikTok that introduced this clever hack in October, Chipotle workers vent about customers who feel “entitled” to the added service. Some even say that they “say no” when asked to mix the ingredients in the assembly line.

By ordering a taco with additional sides like tomatoes, greens, sour cream, or corn, customers are able to knock a few dollars from a burrito bowl, but it doesn’t come without a cost.

One Chipotle worker shares that a customer used this popular hack while ordering online, which required her to individually package each side in small containers so he could save a few bucks. In the TikTok posted on Aug. 31, Christinamae tells the customer that she’s never doing that again, prompting other workers to sound off in the comments.

“Gotta worry about filling all these separate cups with a line out the door??” one worker said.

This hack even garnered Chipotle’s attention, causing the restaurant chain to start charging for extra sides.

What starts as a selfless act of kindness toward the car behind you can quickly turn into a nightmare for drive-thru workers and customers alike. “Pay it forward” lines start when one customer offers to pay for the meal of the car behind them, encouraging others in line to continue the chain.

However, workers say that the generosity doesn’t often extend to their tip jar and can even make it awkward when a customer finally expresses that they don’t want to pay for the next vehicle.

For customers that want to check off their good deed for the day without agreeing to spend an unspecified amount of money on a stranger, one barista suggests tipping the customer service worker a little extra by using the money you would have spent on your order.

Not only is this hack frustrating for workers during peak hours, but it also borders on being illegal. The Daily Dot previously reported on a woman who shared a controversial hack: using a debit card she knows will be “declined” during peak drive-thru hours at Chick-fil-A. The key to this trick, she said, is getting workers to “give up” after becoming frustrated with the growing line.

While some customers found the trick handy, workers warned that if caught, they could be punished by management. The TikTok even contains a warning issued by the platform that reads, “Participating in this activity could result in you or others getting hurt.”

“From a chick-fil-a employee—we literally can’t give you your food for free,” one worker clarified.

9) Waiting outside the store before opening

While some customers think that getting to the store right as the doors open is a hack to receive better customer service and guarantee fully-stocked merchandise, workers say it’s “embarrassing” when prospective patrons queue outside the store.

“That’s when you say to them, if you treat me like that I will refuse service and ask you to leave. I don’t let myself get treated like this anymore,” one worker suggested.

“Every store I’ve worked at, customers have been annoyed with the opening shift being let in while they had to wait outside… 20-30 minutes BEFORE opens,” another added.

and they never buy anything either, i dont get it

A TikTok by a Target worker with over 464,000 views calls out customers for attempting to return “old” or “expired” products, prompting other workers to plea for others to stop abusing the system. According to the Krazy Coupon Lady, Target’s return policy allows customers to return up to $100 in products per year without a receipt.

Returning items that don’t work for you in good faith is no problem, but workers are getting frustrated with customers who take advantage of the system by returning “used” or “expired” merchandise.

“No bc i’m mad when they return them all used unwashed and inside out w stains like damn …” one worker wrote in the comments.

“This manz walked into our store picked up a coffeemaker from the rack returned it for money, then grabbed another one and walked out,” another said.

‘It’s not even hand crafted’: McDonald’s worker shows how iced mocha latte drink is made
‘A NON grocery Instacart order?!’: Instacart shopper says she got an order for a Lowe’s Christmas tree
Advertisement