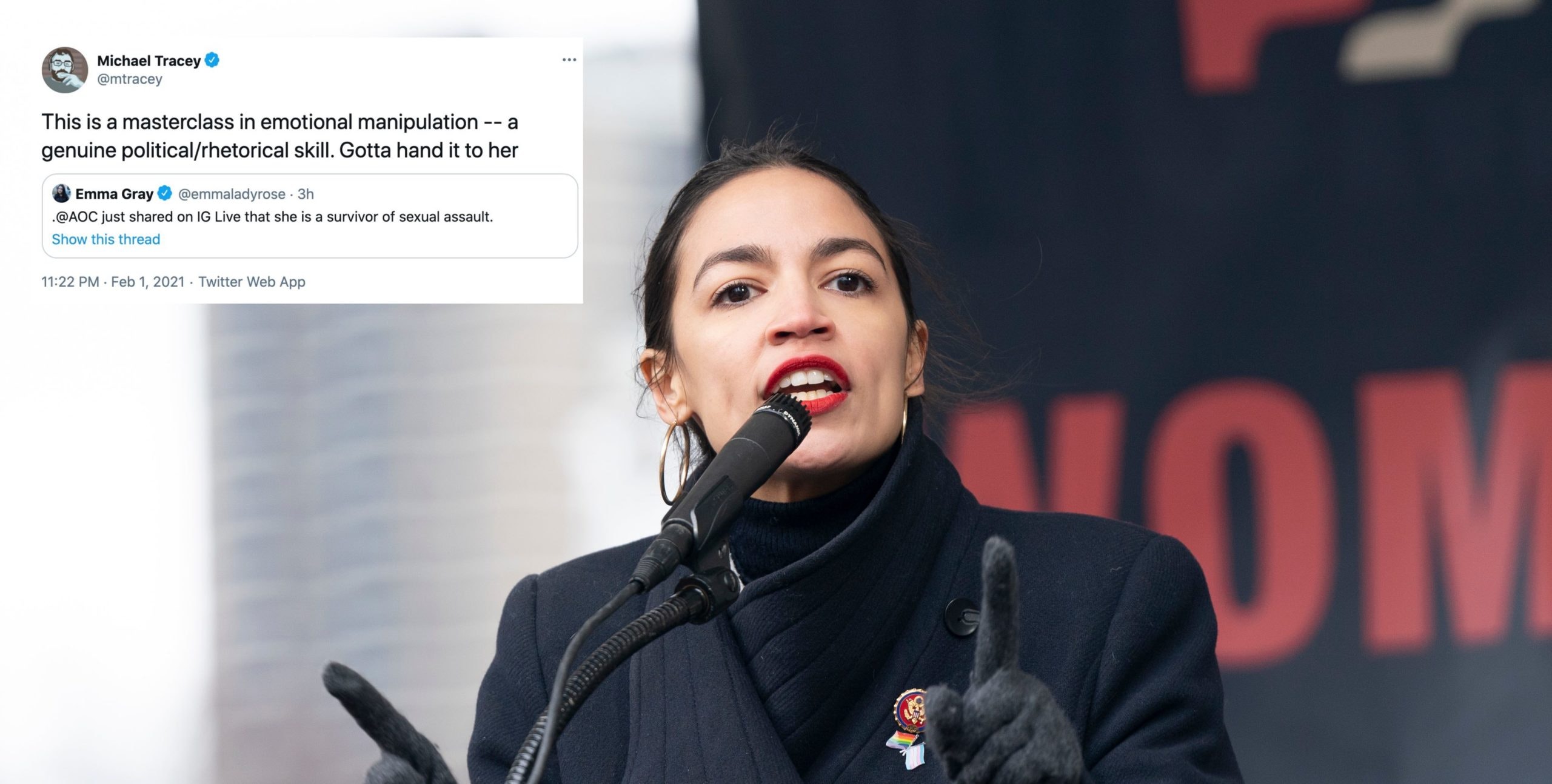 If your biggest claim to fame as a journalist is publicly accusing a member of Congress of assaulting you, only to have the video reveal the congresswoman lightly brushed off your microphone—then getting huffy about it for three straight years—you might think you’d have some qualms about accusing people of misrepresenting their lived experience.

But you are not independent journalist Michael Tracey.

Last night, Rep. Alexandria Ocasio-Cortez (D-N.Y.) spoke about her experience during the Capitol riot, saying how traumatic it was to live through a pro-Trump mob storming her place of work. In her stream, she also told the story of how she was once sexually assaulted and described the similarities and how they could be “compounded,” making the experience all that much worse.

To which Tracey, who never has found a matter in which he didn’t believe he was the most important voice to weigh in on, said she was putting forth a “loopy delusion,” calling it a masterclass in “emotional manipulation.”

Tracey’s brave declaration that he didn’t care for her story faced so much backlash it became a trending Twitter topic, as a great number of people told him off.

The response was so swift and vocal Tracey had to claim he wasn’t saying she was using her assault allegation to “emotionally manipulate” people. He tried to stand by it and also walk it back a touch.

“To all those lashing out in deliberate bad faith, I wasn’t specifically referring to her sexual assault claim here — but rather to the entire interweaving presentation, where invoking ‘trauma’ automatically mandates accepting a politician’s incendiary claims at face value,” he wrote.

Calling his critics bad-faith actors—when he knew what he was doing—is simply a masterclass in trying and failing to emotionally manipulate readers on Twitter.

But he wasn’t the only one who had to proudly boast they didn’t care what AOC had to say, and if they did care, it wasn’t true anyway, so she’s a liar, but not that they were listening all that intently to it.

“Sorry, lunatics—if you think I’m going to accept that there are no psychopathic women who make fake rape allegations, you will be waiting a long time,” wrote Republican lifting bro David Reaboi, before adding that he wasn’t even talking about AOC’s sexual assault, just that he didn’t believe her Capitol experience was traumatic:

“And, for the record, I wasn’t even talking about AOC’s alleged assault trauma. I was talking about her manipulative claim about ‘trauma’ due to Jan 6th—and how she’s trying to weaponized it like someone who lies about being raped on campus. And yeah, that happens.”

This chorus of men simply refuses to not accept that a woman was sexually assaulted. AOC isn’t asking them to hunt down her accused, she’s just saying how it occurred. And for these men, to allow her that space is somehow unacceptable. Why, they probably couldn’t even explicate, because it’s just a regressive, reflexive outrage at how the world has shifted over the past decade.

And knowing things won’t ever shift back, they’re livid that all they can do is tweet about it.

The post Twitter’s worst bros boast they aren’t afraid to call AOC a liar appeared first on The Daily Dot.

‘Don’t lean in’ man identifies newest threat to masculinity: crotch pointing
People are dunking on this pastor for telling women not to do the Silhouette Challenge
Advertisement