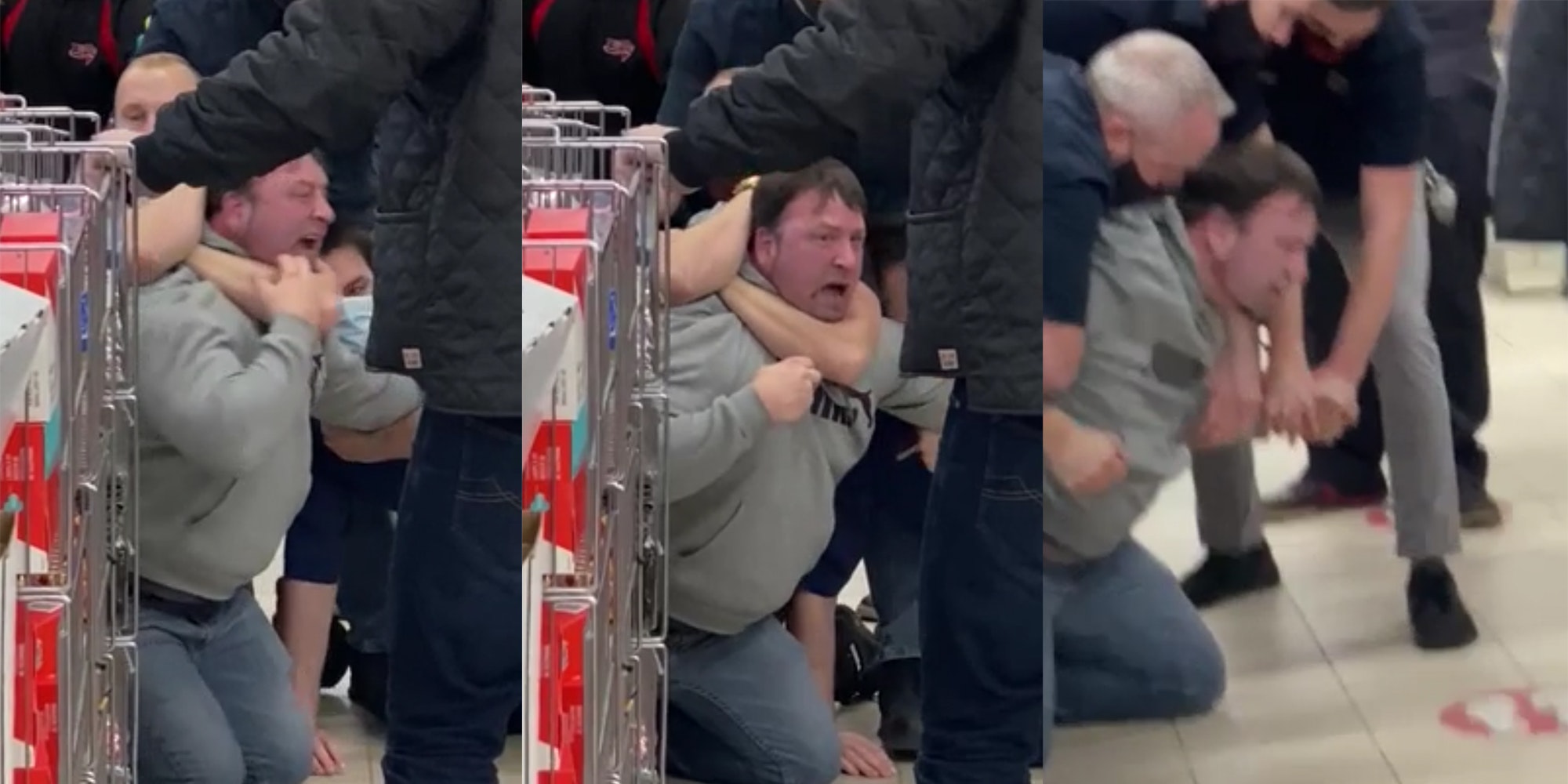 In a video posted on Reddit Wednesday, an unmasked man fights security guards inside a Canadian Tire store after refusing to put on a mask.

The video shows the unidentified man struggling with five employees and security guards in aisle 17 of the crowded store before police were called to help diffuse the situation.

“Get your hands off of me,” the man yells at employees as they attempt to remove him from the store. “Don’t touch me. My humans rights are trumping your bullshit mask mandates. Don’t you fucking touch me. You are going to take your hands off me now.”

As the clip continues, the security guards chase the man, pin him to the floor, and handcuff him. Throughout the altercation, the man says they’re hurting him.

“You guys aren’t the police,” the man says. “You’re nothing.”

Reddit users commented on the irony of the man refusing to wear a mask and then saying that he can’t breathe. “I can’t breathe, but I can yell…” one user wrote.

The man evoked the last words of George Floyd, who was killed by police in May. But redditors pointed out that when the man in the tire store yelled that he couldn’t breathe, the security guards immediately moved their hands away.

“George Floyd was calling out and the cops persisted,” one user wrote. “You can see in the video they let go of him and he continues to say he can’t breathe.”

The customer could be facing charges, according to CTV News Vancouver. Corporal Michael Kalanj told CTV News that Burnaby police had been called when the man allegedly attacked security.

“The information that we got originally and from the statements is that he did punch some of the staff,” Kalanj reportedly said. “I do believe it was more than one person in an effort to not be escorted out of the store.”

Users on Reddit questioned whether security guards applied an excessive amount of force to the man, who was outnumbered five to one.

A spokesperson from Canadian Tire said in a statement that the matter is under investigation and that the company is working with the police, according to CTV News.

The video was originally posted to Reddit with the headline, “Anti-masker taking a stand in a Canadian Tire,” but commenters argued that the man is doing the opposite. Some said as the incident escalated, he should have left the store and taken his business elsewhere. “He was making a fool out of himself,” one user wrote.

Redditors also said the video highlighted the need for all essential workers to qualify for the COVID-19 vaccine as soon as possible.

“And this is why retail workers need to be prioritized for the vaccine,” a user commented.

Another video that surfaced on Facebook shows the same unidentified man causing a ruckus at Metrotown Mall in Vancouver.

“Take off your face diapers,” the man says in the video. “They’re useless. COVID-19 is a hoax.”

The post Video: Anti-masker yells ‘I can’t breathe’ while being restrained by tire store security appeared first on The Daily Dot.

What you need to know about AFPAC, the white nationalist alternative to CPAC
TikToker invites Tinder match’s wife to their date after finding out he’s married
Advertisement