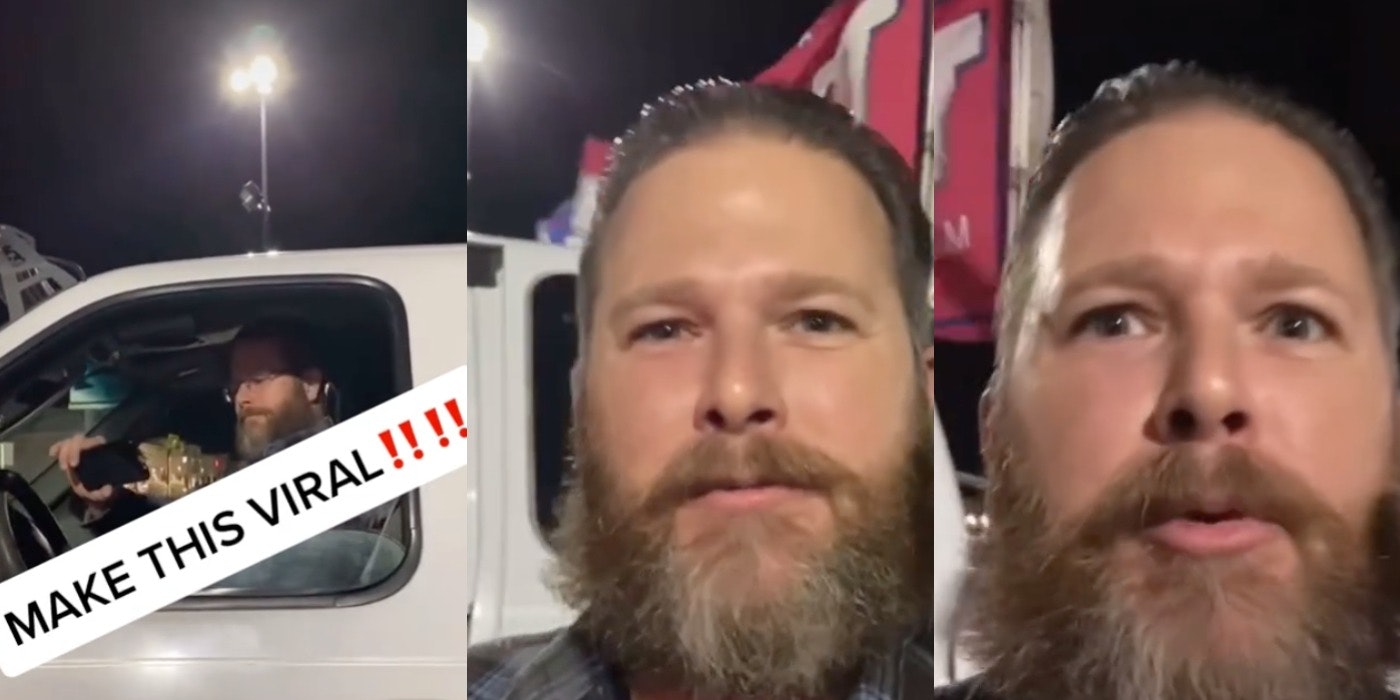 The videos were posted on TikTok by Jess Flores (@jess.florez), with the first video getting over 1 million views. Filmed at a Walmart, the footage starts after a bearded man in a large white pickup, outfitted with a giant Trump flag, gets out of his truck. It is unknown who filmed the video.

The video caption reads: “Blow this up!! He got mad & aggressive to this guys family just for a “F*ck Trump” sticker.”

“You mad he lost, bro, or what?” asked someone in the car facing the Trump supporter. They are filming him getting out of his truck.

The man is so upset that he starts being racist right away, mimicking stereotyped cholo vernacular at the unseen man, who’s likely Hispanic given the context clues in the series.

“Your momma,” quips the disgruntled Trump supporter. “And that poor grandmother of yours too, puta. L.A. homes, alright ese.”

Then the white man, who has nothing, runs off some nonsense and threatens him.

The unseen videographer says, “You’re the one that hurried over there, and got in your bitch-ass truck, came all the way the fuck over here.”

The Mayo Cholo responded: “You got a problem with American-made fucking shit. You’re a puta bitch.”

Mayo Cholo keeps going with the wild racism, nonsensically telling the Hispanic man to “go back to the Middle East, if you’re with that terrorist shit.”

The man checks him, wondering if Mayo Cholo is about the action: “Go ahead, come on.” He does nothing but film some other part of his car.

The man laughs at Mayo Cholo, who jumps back into his truck: “You’re the one that drove all the way over here, and harassed me and my family.”

Mayo Cholo claims he was approached, but the man reminds him that he has the entire event on the phone.

“Now you wanna lie and act like a bitch all the sudden, huh?” he says.

Then Mayo Cholo is so discombobulated that he tries to drive away and nearly hits a car in the opposite lane.

The Hispanic man films the license plate of the truck, noticing he has a handicap plate. “FDT,” by rapper YG, plays in the background.

In the wildest part of the series, Mayo Cholo pulls out a cardboard square with a middle finger drawing.

In the last video, he tells Mayo Cholo: “Everybody’s gonna find out who you are, bro.”

He tells another Walmart shopper, “He hopped in his truck and came all the way over here to harass me and my family. Can you believe that shit?”