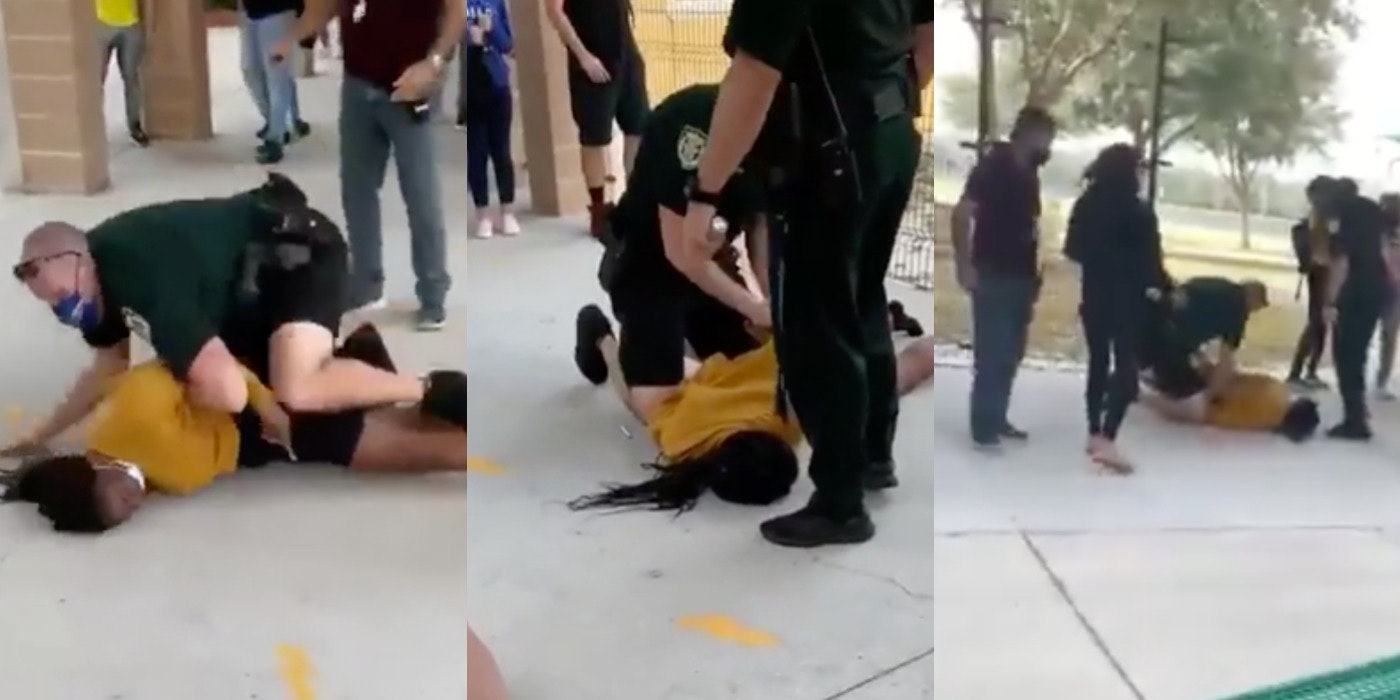 A video trending on social media shows an Osceola, Florida deputy body-slamming a Black teenage Liberty High School student, driving her head into a concrete sidewalk, and appearing to knock her unconscious.

The incident has raised contention across numerous points, including the county’s sheriff’s department’s lack of diversity, unnecessary police escalation, and the controversial notion of “school resource officers.”

Students filmed footage, which made it to Reddit’s r/PublicFreakout page, featuring the incident in progress, with the officer struggling with the unnamed girl in an outside breezeway at the high school. The girl’s head hits the pavement with an emphatic thump, and she loses consciousness.

The scene caused an immediate uproar, which was amplified by the responses on social media.

Warning: The videos of the incident are graphic.

The deputy, later identified as Ethan Fornier, then jumped on top of the girl, pulling her arms back. Fornier puts her in handcuffs as another deputy stands guard. The girl remained unmoving and did not appear to regain consciousness.

“What the [expletive] is wrong with you?!” a student yelled toward the deputy.

In a statement released Tuesday, per the Orlando Sentinel, “Osceola County Sheriff’s Office confirmed the agency employed the deputy as a school resource officer at Liberty High School in Kissimmee.”

Nirva Rodriguez, an agency spokesman, told the outlet that Fornier was “in the process of trying to stop the student from fighting another student in the hallway when the deputy took her into custody.”

The official statement from Osceola County Sheriff’s Office, released on Tuesday evening, says the video is “depicting one of our School Resource Officers in a confrontation with a student. The incident appeared to take place between classes in the hallway. In the video, it shows the deputy taking the student to the ground and placing handcuffs on her.”

Sheriff Marco Lopez says Fornier, a 10-year vet, has received death threats in a press conference today but would not comment further on specifics as the matter is now in a criminal investigation. He also said the girl’s injuries were treated at the scene.

Fornier, he says, will be on paid administrative leave until the conclusion of the investigation.

The post Video: Officer slams Black girl to the ground at Florida high school appeared first on The Daily Dot.

Dad of influencer who bullied ‘cancer patient’ on Omegle kicks her out of house in live video
‘You were being a misogynistic sexist piece of sh*t’: Twitch streamer shuts down troll
Advertisement