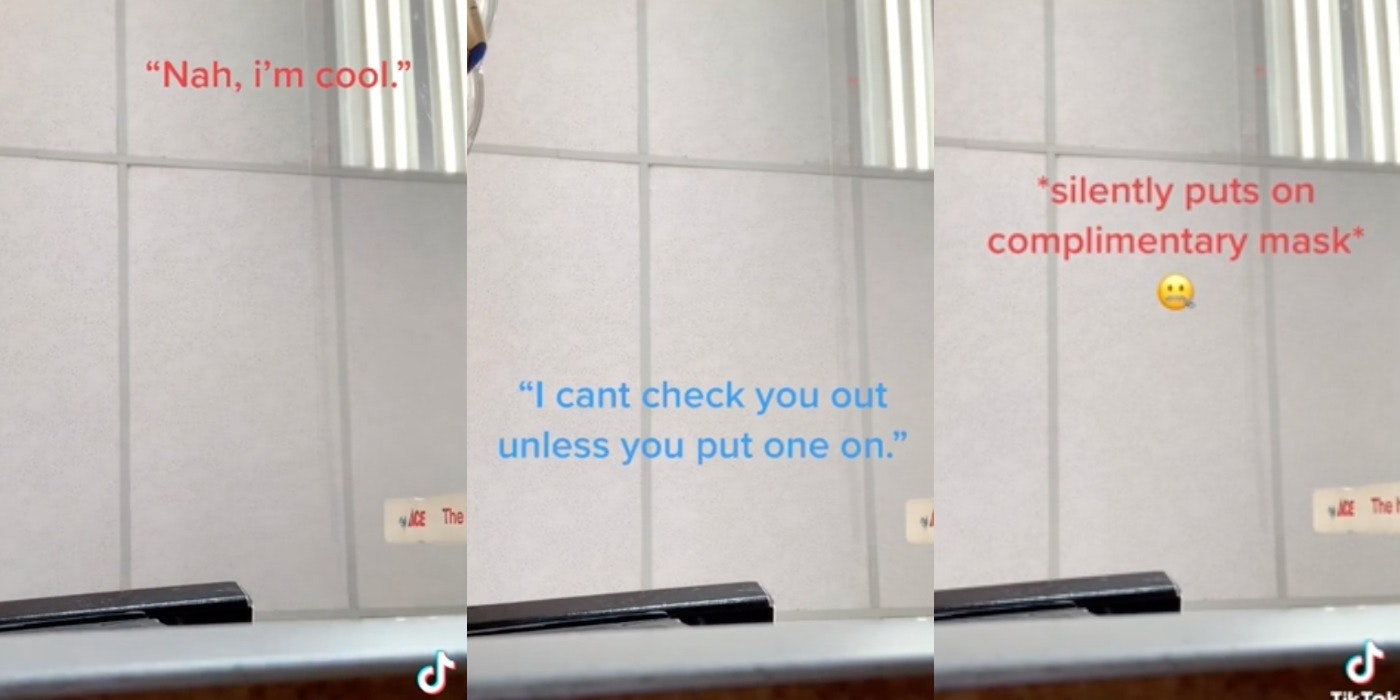 A TikTok video trending on Reddit shows an anti-masker caving in and putting on a complimentary face mask after being denied service at a hardware store.

The video was first posted to TikTok by Hailey (@tiktokwhooty). The original has since been made private, but it was also shared to Reddit’s popular r/PublicFreakout page.

The brief altercation occurs at an Ace Hardware in northwest Washington. Hailey has the camera tilted upward from below the register, putting her and the customer largely out of frame, but the audio is clear.

“You got a mask to throw on for me?” she asks the anti-masker. He declines.

“Can I ask you to put one on?” she asks politely. He declines once again.

“I can’t check you out unless you put one on,” she states. The anti-masker then pulls his sweatshirt over his mouth.

Hailey says she still can’t check him out, but the customer claims his sweatshirt shenanigans are “better than a mask.”

When she tells him that it still doesn’t qualify, he gets feisty, gesturing to his face and saying, “Somebody tell me I have a mask on.” She doesn’t budge.

“So you’re not going to check me out?” he asks.

“I’m not allowed to check you out without a mask,” Hailey replies. The customer then attempts to get someone else to check him out, again to no avail.

Fortunately, the Ace Hardware employees had Washington’s mask mandate on their side. Seeing no way forward for his foolishness, the customer finally gives in.

In the text overlaying the video, Hailey says the customer puts on the complimentary mask—meaning he wasted everybody’s time by denying something readily available to him.

Viewers on both TikTok and Reddit were baffled at the customer’s willingness to inconvenience employees and mocked him for his behavior.

“It’s so embarrassing how they have to make this so difficult for no reason,” one TikTok viewer commented. “It’s just a mask.”

The post Video shows customer refusing to put on mask during checkout, only to cave seconds later appeared first on The Daily Dot.