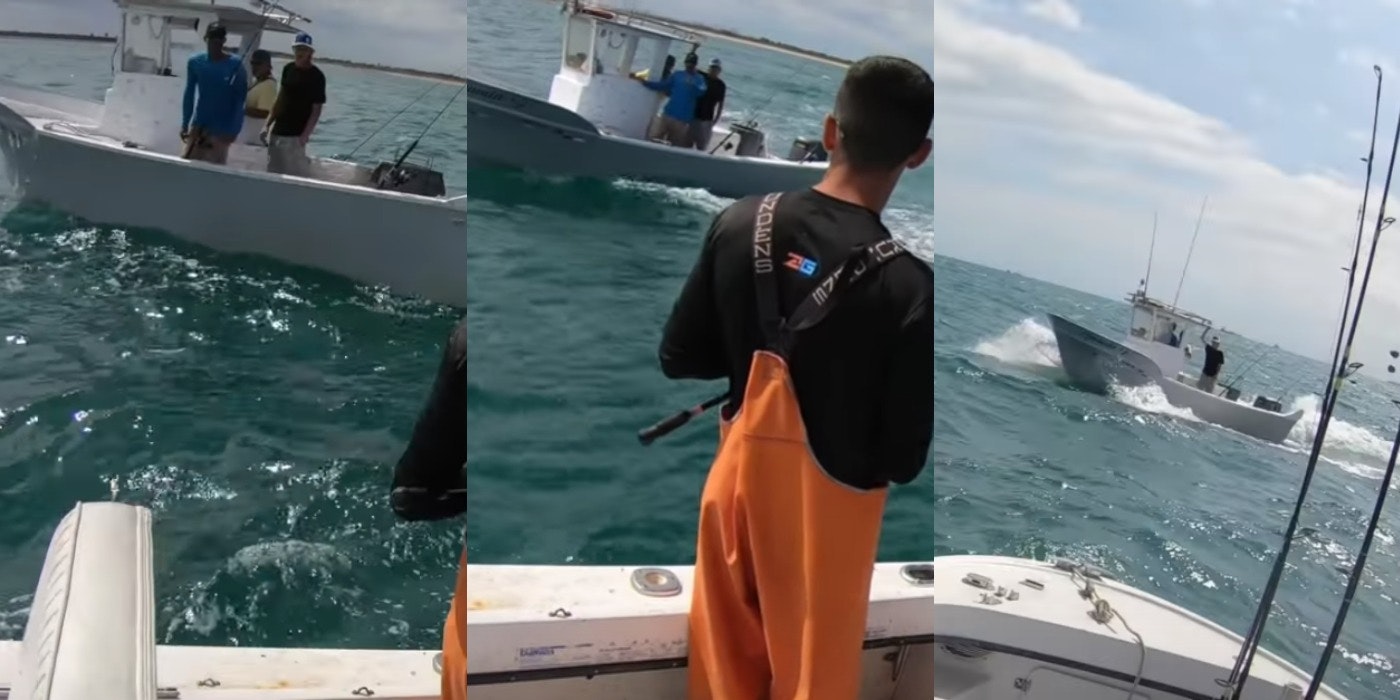 A video making the rounds on social media shows fishermen verbally harassing a group of fellow fishermen with anti-black and homophobic slurs off the Florida coast.

The video, posted by @BillyCorben on Twitter, shows a small boat called the “Amanda V” speeding toward a trio of young fishermen with their lines cast. CBS Miami identified the videographer as Shannon Bustamante, a YouTuber with a commercial angler focus.

One of the fishermen on the Amanda V, indicating the young men apparently came too close to it at some point, threatens them, saying, “If you ever f*cking wake me out again, I’ll break your f*cking legs.”

The overlay text on the video explains that it was the third time that week the men threatened them. “Shut your f*cking [N-word] mouth,” one of the men says.

He then tells the group to meet him at the boat ramp, and the men on Amanda V hurl more racial and homophonic slurs. Then, they speed around the trios’ boat, killing whatever progress they had with their lines, and tell the Black man to “keep your [N-word] ass back in town.”

The video is a portion of a more extensive video posted by Bustamante. The caption on the 12-minute YouTube video reads: “My Commercial Fishing Friends invited me fishing out of Stuart (Florida), and we arrived to a spot filled with commercial mackerel fishing boats. My Friend knew most of them and asked to anchor up beside two of his friends, but as we made our approach, he goes, ‘ohhhh no, there’s that boat again.’ This boat happened to be the one shouting the N-WORD at his mate anytime they passed by them and had made silly threats in the past for no other reason than the fact that his mate is an African American man on an all-white Treasure Coast Fleet of about 30 -40 boats.”

“Sure enough, we drop anchor, and the boat they mentioned starting screaming to get the F away and that (we) and our [N-word]​​ friend are too close. This frustrated the captain, so he pulled anchor and sped away from there. We anchor at our new spot, and within 30 minutes, here came trouble. The boat named Amanda V bee-lined straight to us, and the rest is history with physical threats and 1950s type of KKK Racial garbage spewed at the young mate. Beyond the ugliness, we caught a bunch of big sheepsheads and mackerels.”

Nowhere in the longer video, which shows the group setting up their day of fishing, does it show their boat come in close contact with another boat.

After the clip was posted to Twitter, it didn’t take long for the boat’s owner to be identified. While the owner was identified Anthony Puleo, an apparent landscaper from Port St. Lucie, it is unclear if he was on the boat at the time of the incident.

People have apparently been overwhelmingly flocking to Puleo’s website, to the point where it’s currently down.

In an interview with CBS Miami, Bustamante called the incident “horrible” and “unacceptable.”

“Here comes this guy who just wanted a bone to pick with us, anyways,” Bustamante said. “He pulls up, and you just see his true colors come out.”

Fakehub is ideal for the fantasies you can’t find IRL
‘I HATE IT HERE’: Texans are pissed after Greg Abbott lifts mask mandate, reopens 100%
Advertisement