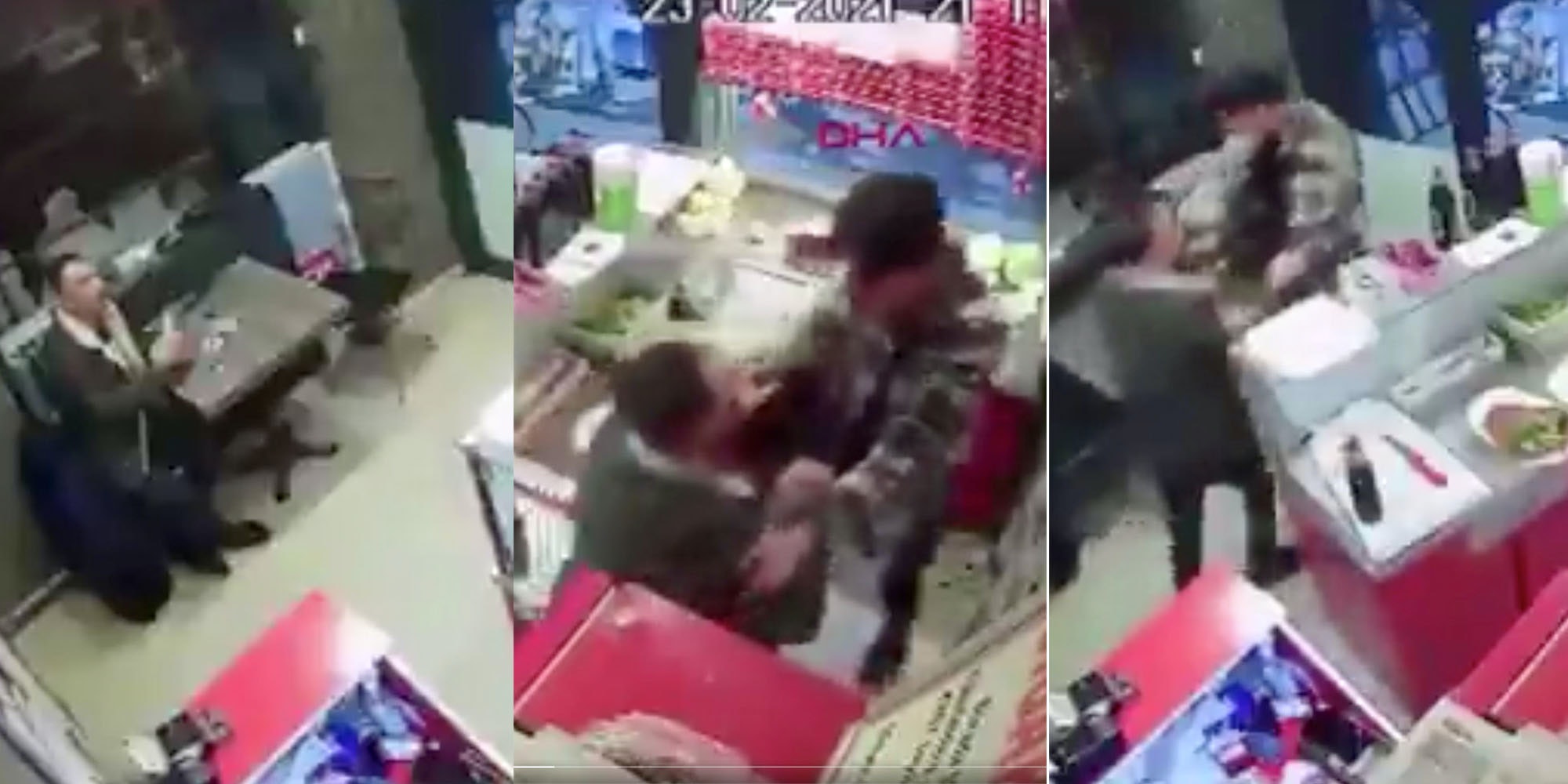 A viral video captured last week shows a man in a Turkish restaurant attacking what appears to be one of its employees—allegedly because the food was too spicy.

The video, shared on Twitter and on Reddit’s r/PublicFreakout subreddit, shows a man getting up from a restaurant table, confronting the employee standing behind a counter, and the seemingly unprovoked attack that follows.

The tweet containing the video points to the incident taking place in Afyonkarahisar Province, also known as Afyon Province, in the Aegean region of western Turkey, with a clearly-visible Feb. 23 date in the upper right corner of the video.

The tweet, from user @atavrattroll, shows what looks to be security cam footage providing a bird’s eye view of the scene—which was approaching 900,000 views as of Monday evening.

It also appears that thanks to the internet sleuthing this user did, that the man has been dismissed from his job.

In it, the customer (presumably Gurur Şenel) gets up from the table and confronts the employee working behind the counter. The customer throws the food at the employee as he approaches.

Though the video segment concludes with the customer still in the store, the employee appears to gain the upper hand about halfway through the confrontation, and moves the unhappy customer toward the door.

Now to the detective work: Tweets from @atavrattroll looked to identify Gurur Şenel via his Instagram and Facebook accounts. He also produced a business card identifying Şenel as an employee of İhlas Pazarlama, a Turkish appliance company.

A Twitter campaign of sorts then launched, with concerned people posting and even going to the company’s social media platform with complaints about the man’s actions.

The account for İnci Sözlük, a Turkish online community considered by some “the Turkish 4chan,” noted, “Edebiyle çalışan şu çocuğu çiğ köftenin acısı yüzünden darp eden şu dağ ayısına gerekli cevap verilir umarım,” translating to, “I hope the necessary answer will be given to this mountain bear who beat this literary boy because of the pain of raw meatballs.”

Another, in response to an unrelated tweet from the company, declared, “Çiğköfteci çocuğu döveni kovmazsanız su arıtıcıyla tost makinasını genelmerkez önünde size atarım,” which Google translates as, “If you don’t fire the Çiğköfteci boy, I’ll throw the water purifier and the toaster to you in front of the headquarters.”

(Çiğköfteci refers to çiğ köfte, the specific Turkish dish that Şenel appeared to be displeased with.)

The company’s official Twitter account responded with the reassurance, “Hassasiyetiniz için teşekkür ederiz. Olayın tarafımıza iletilmesinden sonra adı geçen kişinin çalıştığı bayi ile iş akdi sonlandırılmıştır,” meaning, “Thank you for your sensitivity. After the incident was communicated to us, the employment contract with the dealer where the said person works was terminated.”

And indeed, the account then posted a kamuoyuna duyuru (public announcement) talking about becoming aware of the violent incident and terminating his contract as a result.

The post Video shows man attacking restaurant employee because food is too spicy appeared first on The Daily Dot.