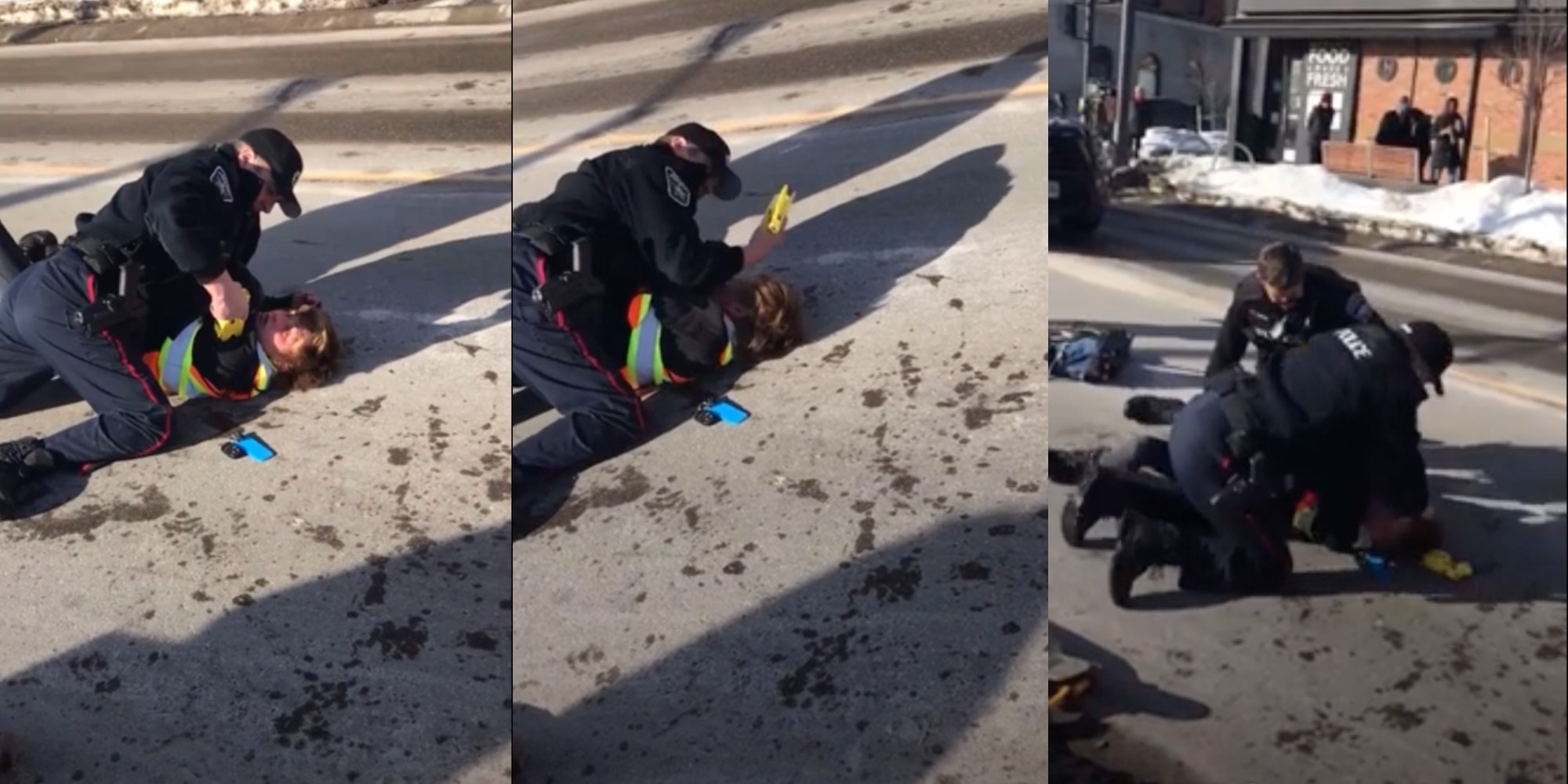 Excessive police force isn’t exclusive to America, as demonstrated by a viral traffic arrest video that shows Canadian police officers slamming a skateboarder who rode through a red light into the pavement.

The video, which took place in Barrie, a city in Ontario, Canada, has drawn outrage online and prompted an internal investigation by the Barrie Police Service.

Several brief clips show the arrest from different angles. Three separate videos shot to the top of Reddit’s r/PublicFreakout within hours of their posting.

The most viral clip is less than a minute long. At its start, police already have the skateboarder on the ground. He is on his back, with one officer crouching over him and another standing nearby.

A woman behind the camera asks the skateboarder how old he is, and he responds that he is 20. One officer threatens to “light” the skateboarder up with his taser, though it is unclear why. The young man stays relatively still, and although he does occasionally kick his legs, he does not appear to be resisting.

When the woman filming advises the skateboarder to put his hands above his head in hopes of de-escalating police, he says he can’t because one hand is trapped behind his back. Despite this, the cop on top of him whacks the him on the head with his taser, upsetting the surrounding witnesses.

The final moments of the first clip show the police abruptly switching tactics, teaming up to aggressively flip the skateboarder onto his stomach. The cop who had pinned him then punches him in the back of the head, prompting screams of horror from onlookers. One woman bursts into tears.

The police threaten bystanders with arrest if they don’t “get back.”

The first clip ends soon after the flip. Redditors expressed relief that the post’s claim of a “curb stomp” was exaggerated. Still, the aggression displayed by police concerned viewers, many of whom noted that it is common in Barrie.

Another clip shows a side angle of the same incident. It, along with a longer version of the first video, were both posted by someone claiming to be the skateboarder’s sibling. After police finished cuffing the skateboarder, they placed him in one of a handful of police cars gathered at the site.

Witness Kelly Platt told BarrieToday that the arrest took place after the skateboarder “blew through” a red light. After police stopped him and served him with a ticket, he began skateboarding again down Dunlop Street, in downtown Ontario.

“That’s where the cop car chased him down and swerved in front of him,” Platt told reporters. “I heard him asking the officer why he was still bothering him after he already gave him a ticket.”

That’s when police decided to arrest him, according to witnesses. A comment from the skateboarder’s sister claims that “he was skateboarding and ran a red light, got a ticket, cursed at the cop and then was assaulted.”

The Barrie Police Service told BarrieToday that it had seen the video and intended to review it before making any further statements. It made a similar announcement on social media.

“I’ve seen the videos of the violent arrest on Dunlop Street. This will be fully investigated,” Lehman tweeted. “I won’t be ignoring this, and once we have all the details, there will be full accountability.”

Reddit viewers expressed their exhaustion with the constant onslaught of police violence. But this video also felt tame to many American viewers. Compared to numerous stories of police killing innocent people, the footage of cops brutalizing the skateboarder somehow seemed mild.

The poster claiming to be the skateboarder’s sibling said he made it home safely. “When he came home he had a huge goose egg on his head and his knees are scraped to shit, but he was smiling and just happy to be able to play video games,” they commented on one of the videos.

The Daily Dot has reached out to the skateboarder’s sibling.