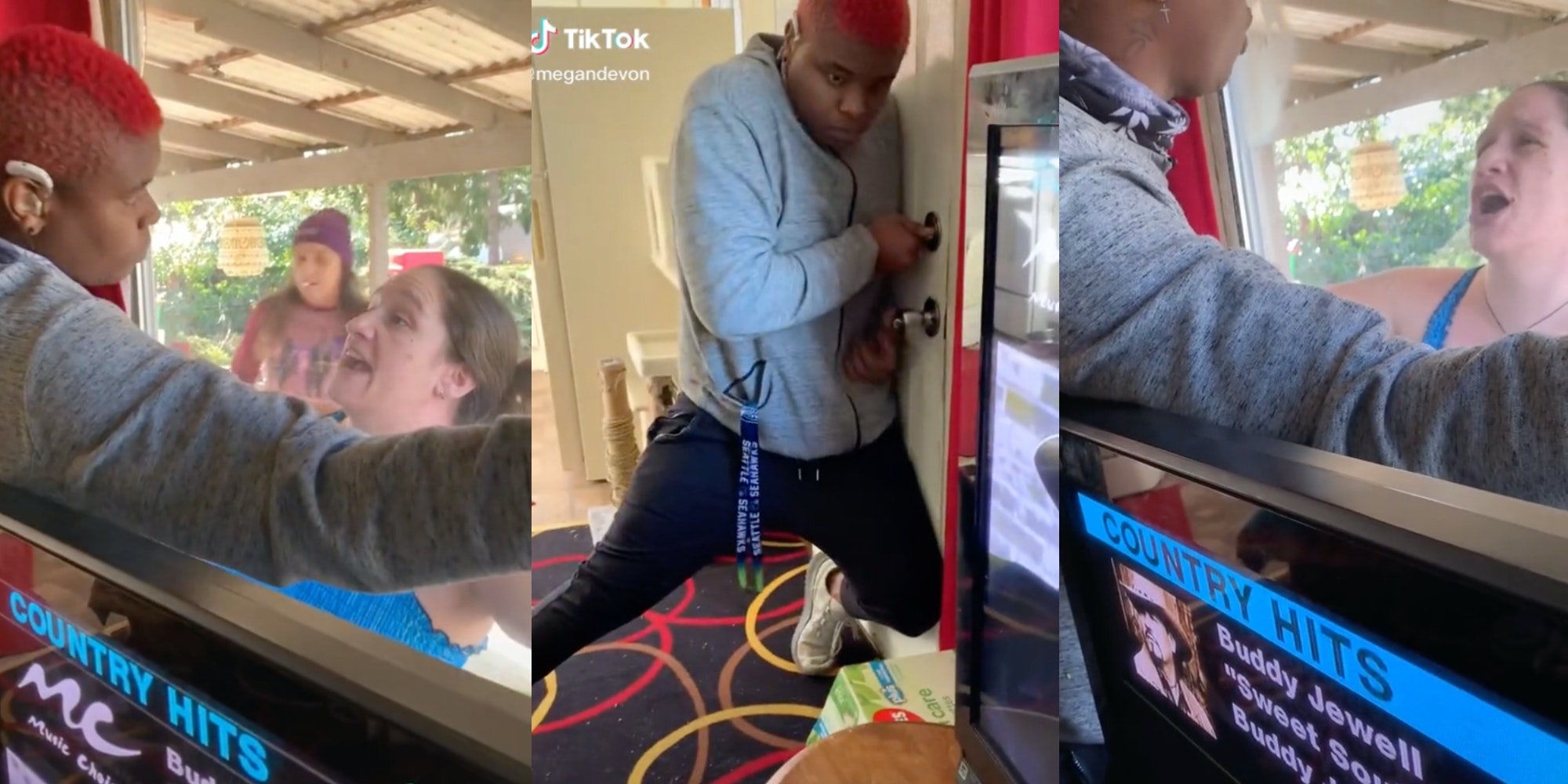 We’ve all become familiar with “Karens” over the past year, whether we’ve seen them trending online or know one personally. But what if the Karen on your was your mother?

A recent viral TikTok provides a glimpse into that reality, as a white mother attempts to break into her daughter’s home, where she lives with her Black boyfriend.

The baffling video, originally uploaded by TikToker @megandevon, quickly shot to the top of Reddit’s r/PublicFreakout.

The Reddit version, which labels the attempted trespasser a “Crazy Karen,” largely misses the story behind the viral video. But Megan Devon, as she calls herself on TikTok, has been updating followers about her story for days.

The family drama appears to have started when Devon began dating her boyfriend, Trey. She’s shared numerous videos on her TikTok, showing messages from her family as far back as October 2020.

The messages are rife with racist language, as her white family comes to grips with her new Black beau. Devon’s mother accuses Trey of being a financial leech and shares a deeply flawed assessment of the difference between white and Black family units.

Much of the drama appears to revolve around the house. According to Devon, she owns the property, but messages show that her mother lives in the house with Devon and Trey. She used to, at least.

That brings us to the latest viral video, which stars Devon’s mother. In the TikTok that eventually spread to Reddit, Devon and Trey have finally had enough. After Devon’s mother barricaded herself in their home and locked the couple out, they decided to seek a protective order. They were denied twice.

Instead, they went the eviction route. Since Devon owns the home, she has a right to decide who lives in it. The video shows as Devon’s mother discovers that she is no longer welcome in the home and attempts to break in. Trey, who appears to wear a cochlear implant, barely manages to lock the door as Devon’s mother and sister arrive outside.

Immediately, Devon’s mother attempts to break in through the window.

When Trey holds the window closed, Devon’s mother threatens to “smash [his] face in.” She repeatedly taunts the couple and goads them to call the police as they bar her from entering the house.

In a follow-up TikTok, Devon explains the circumstances leading up to the video. She claims her mother’s “controlling, abusive, manipulative, racist” tendencies pushed the couple to seek her removal from their home through an anti-harassment order. Months of issues led up to the decision, but hurdles with the police and judges have kept Devon from taking legal action.

Devon says she has a court date on Monday and plans to sue the local police department for “not upholding the law and protecting us.”

She further explains that her sister broke the front window during their last altercation, but the police were unconcerned. Devon claims she and Trey have spent upwards of $7,000 staying in hotels and attempting to find legal avenues out of their situation.

Devon gives some additional background about her mother in her most recent TikTok. She says her mother is “codependent and controlling.” She apparently has an issue with Trey, in part, because he gave Devon the courage to demand more freedom. She has reportedly stolen the couple’s dogs, broken their property, and physically assaulted them.

In the comments on TikTok, viewers encouraged the couple to seek help through federal authorities. As several commenters noted, however, it may be especially difficult to evict Devon’s mother during the pandemic. President Joe Biden recently placed a ban on evictions that is set to last through March 2021. Until then, Devon may struggle to find a legal avenue to get rid of her mother.

The Daily Dot has reached out to Devon.

The post Video shows white woman trying to break into house of her daughter and her Black boyfriend appeared first on The Daily Dot.