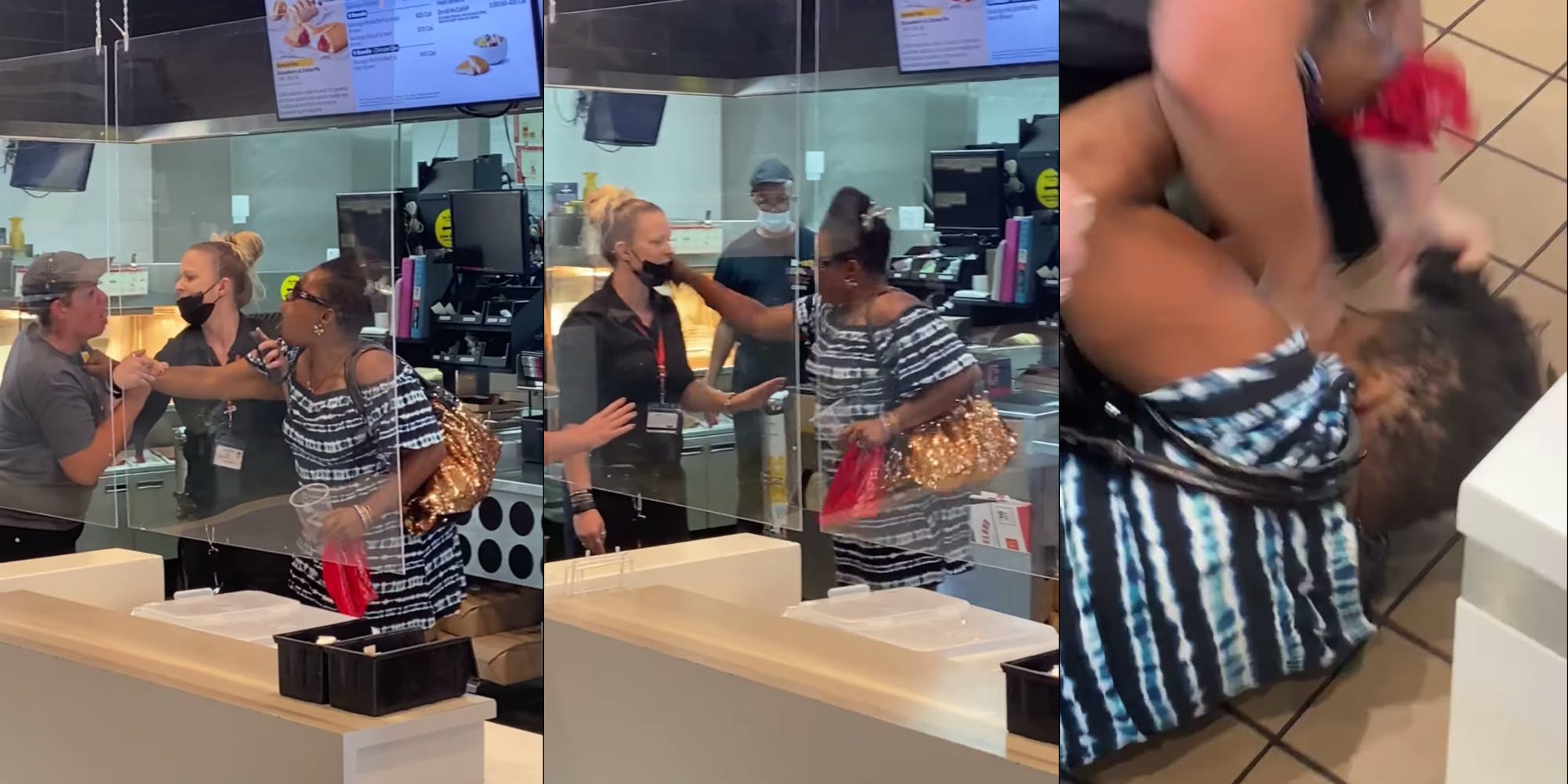 A furious Ohio woman was caught on tape repeatedly attacking McDonald’s employees over a slushie.

The video, originally posted to the Facebook page of a local named Brian Allen, was filmed at a Ravenna McDonald’s location on June 14. In the three days since it was posted, the video has racked up more than 2.6 million views and has collected nearly 40,000 comments from shocked viewers.

The incident supposedly began after the woman, since identified as 44-year-old Cherysse Helena Cleveland, was denied a tri-flavored slushie. Allen, speaking with local outlet Cleveland 19, said staff told her that wasn’t an option, enraging the woman. The video begins not long after this conversation, as Cleveland shoves her way behind the counter to access the slushie machine for herself.

Two female employees block Cleveland’s path to the machine, telling her to “get out” from behind the counter. Cleveland repeatedly attempts to reach one of the employees in particular but finds herself blocked by the store manager. The manager, in a stunning display of patience and composure, tries to keep the two women apart even after a swing from Cleveland hits her squarely in the side of the head.

After several tense moments, Cleveland appears to feel sudden remorse. Still behind the counter, she apologizes to the women, noting that she’s “been up all day.” In a calm and mild voice from behind her face mask, the manager tells Cleveland that she’s sorry but “you can’t be back here.”

This seems to set Cleveland off again, and she snatches the face mask off of the manager’s face before knocking several things from the counters. She tells the women that “I don’t give a fuck” and happily proclaims that she “will go to prison” over the incident.

Cleveland then casually fills her drink cup with ice. Then she heads back behind the counter.

One of the employees, attempting to block Cleveland’s path to the slushie machine, grapples with her for a long moment before Cleveland rocks back and punches the woman in the face. The two women then tumble to the ground as the employee gains the upper hand, clutching to Cleveland’s hair as she plants several blows on the side of her head. Other employees quickly step in to break up the fight.

The police arrive soon after, placing Cleveland in handcuffs and escorting her from the premises.

Viewers found themselves utterly baffled by the amount of vitriol displayed over a slushie. A truly unfortunate number of comments are racist in nature, scattered amidst jokes and legitimate discussion.

“She ordered Mcchicken but got a Mcfist,” another quipped.

Past the racist comments and Facebook trolls, many viewers commended the manager for her demeanor and repeated attempts to diffuse the situation. They called on the Ravenna McDonald’s to give her a raise over her impressive handling of the situation.

Cleveland was arrested around 9:40am and charged with two counts of misdemeanor assault, according to the Daily Mail. She reportedly appeared in court on June 15 and was ordered to keep away from both the employees and the McDonald’s location. Her bond was reportedly set at $1,000.

Allen, speaking with Cleveland 19, joined commenters in applauding the McDonald’s manager for her composure. “If I was in their shoes, I wouldn’t have been able to show the restraint they did,” he said. “You can see from the video that several times, not just once, she physically assaults and or pushes them. And they don’t do anything except for to try to protect themselves. And you can clearly hear the one employee trying to protect her boss as well. I think they both did outstanding jobs.”

“I don’t see anybody having to take abuse like that,” Allen continued. “I think the lesson is just to treat people the way that we want to be treated, and I don’t see that a lot in the world anymore.”

The Daily Dot has reached out to McDonald’s and will update this article if it responds.

The post Video shows woman attacking McDonald’s workers after being told tri-flavored slushie was not an option appeared first on The Daily Dot.