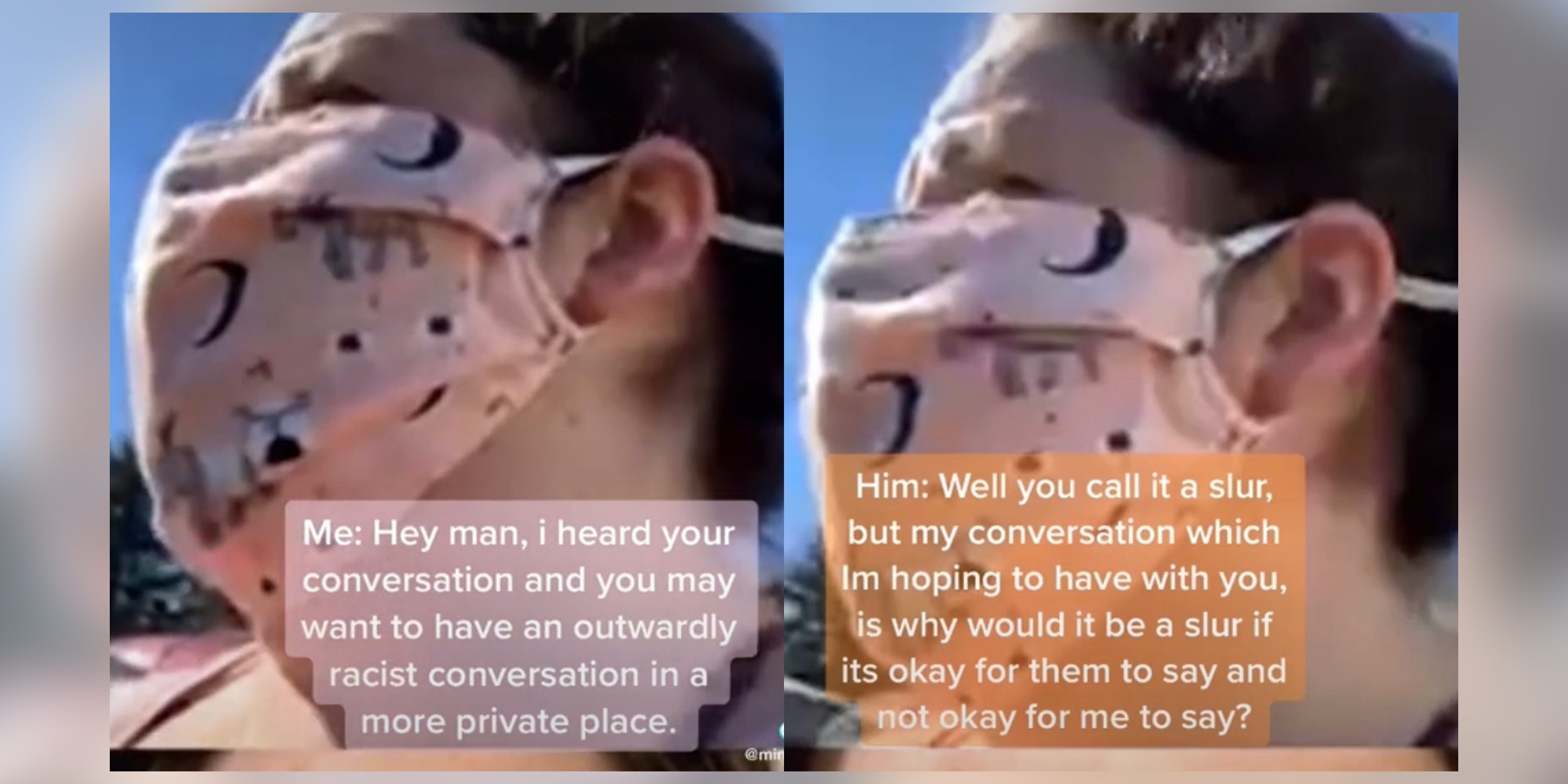 A viral TikTok shows a woman confronting a man for using racist slurs, peppering him with questions until he admits he only used the racist language “because I can.”

The video, uploaded to Instagram and TikTok yesterday by Shannon Thurston (@mind_body_voice), has earned more than 176,000 views on the latter platform. It has also earned more than 2,200 upvotes on Reddit’s r/PublicFreakout page.

The video begins after the unidentified man has already used offensive language. Thurston, with her camera pointed at her face, offers the man advice: “Hey man, I heard your conversation, and you may want to have an outwardly racist conversation in a more private place.”

When the man responds confusedly, Thurston offers clarity: “I heard you say the N-word multiple times, and that’s just not cool, dude.”

The man appears surprised that Thurston doesn’t like the word, which he doesn’t consider a slur. “Well, you call it a slur, but my conversation, which I’m hoping to have with you, is why would it be a slur if it’s OK for them to say but not me because I’m white?” the man asks.

“There’s a lot of people in the Black community who don’t like that word either,” Thurston responds. “But a lot of Black people died with that name being yelled at them.”

The man is obstinate. “A lot of Black people enjoy using it as words of endearment,” he argues.

Then Thurston hits him with a question for which he has no answer: “So I’m curious, what names have white people been called as they’ve been hauled up trees and lynched?”

In a second TikTok, Thurston repeatedly asks the man why he needs to use the N-word. He dodges the question, instead calling Thurston “ignorant” multiple times and growing increasingly flustered. Finally, he admits the flimsy reason for using his racist language: “Because I can.”

“There it is, people,” Thurston says, looking at the camera.

Viewers on TikTok eviscerated the man in the comments of Thurston’s video.

“Them using that word bc ‘black ppl use it’ is just a small demonstration of their obsession with wanting to be black and to feel included,’” @luhlatto wrote.

“Y’all really PRESSED bc you can’t say one word,” @babygirlblack 22 wrote. “Like one word in the whole English language. It really just shows how weak you are.”

The post Viral Tiktok shows woman shutting down man who uses racist slur ‘because I can’ appeared first on The Daily Dot.