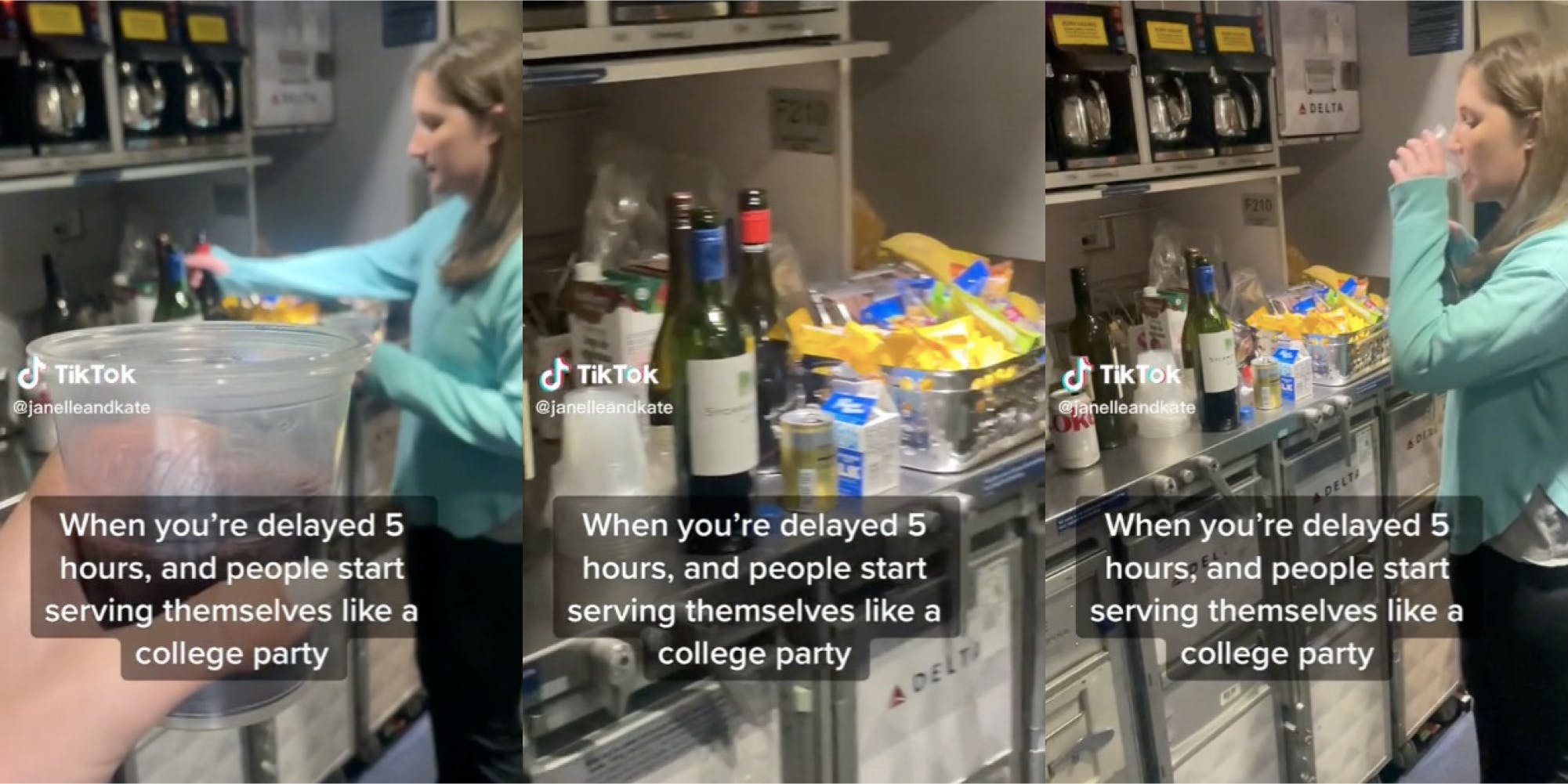 Flight delays are incredibly common. Forbes recently claimed that “more than 25,000 flight delays and 3,100 cancellations” were experienced in one day earlier this year, a sign that the flight industry’s recovery post-COVID is still experiencing fits and starts.

Although this inconvenience is widespread, little has been done to make the experience more palatable for travelers. While in the EU passengers who have experienced delays are entitled to up to 600€ compensation per passenger, no such protection is legally codified in the United States.

This frustration with flight delays has led some passengers to make the experience more exciting themselves, as evidenced by a recent viral video from TikTok users Janelle and Kate (@janelleandkate).

In a video with over 1.6 million views, the TikTokers claim that their Delta flight was delayed by over 5 hours. As a result, the TikTokers and other passengers took to serving themselves alcohol “like a college party,” per the video’s text overlay.

At first, some doubted the authenticity of the video.

“Not a ground delay. This is the middle of a very long flight,” one user wrote. “The creator is creating a false narrative, just like all things social media related.”

“This is literally the ‘Anytime Snack’ setup Delta offers…move along, people,” another alleged. It’s unclear if this is correct, however, as Delta does not claim to have an open wine bar as part of this service on its website.

“This is mid flight on international service,” a third offered. “No idea what the point was to make up that headline.”

However, Janelle and Kate claim that the video is legitimate.

“Dude, we were stuck on the ground for 5 hours,” the users wrote in response to a comment questioning the video’s veracity.

Soon, other TikTokers shared their own flight delay stories.

“We were delayed like an hour and I ordered a Jack shooter and she gave me two for free,” one commenter claimed. “Delta is honestly the best.”

“Lol, I was delayed eight hours and they gave us all the free snacks and drinks,” a second stated.

“My United flight got delayed 4 hours and they gave us meals and two alcohol drinks for free,” another recalled.

The Daily Dot reached out to Delta via media contact form and to Janelle and Kate via Instagram direct message.

The post ‘Wait, you can do that?’: Delta passengers serve themselves alcohol after plane delayed 5 hours appeared first on The Daily Dot.

Personality-driven content creator Sol Carlos discusses the importance of spontaneity
‘I’m going to walk into traffic!”‘ Server at a Greek restaurant says customer tipped 3% after he couldn’t get mayonnaise for his shrimp
Advertisement