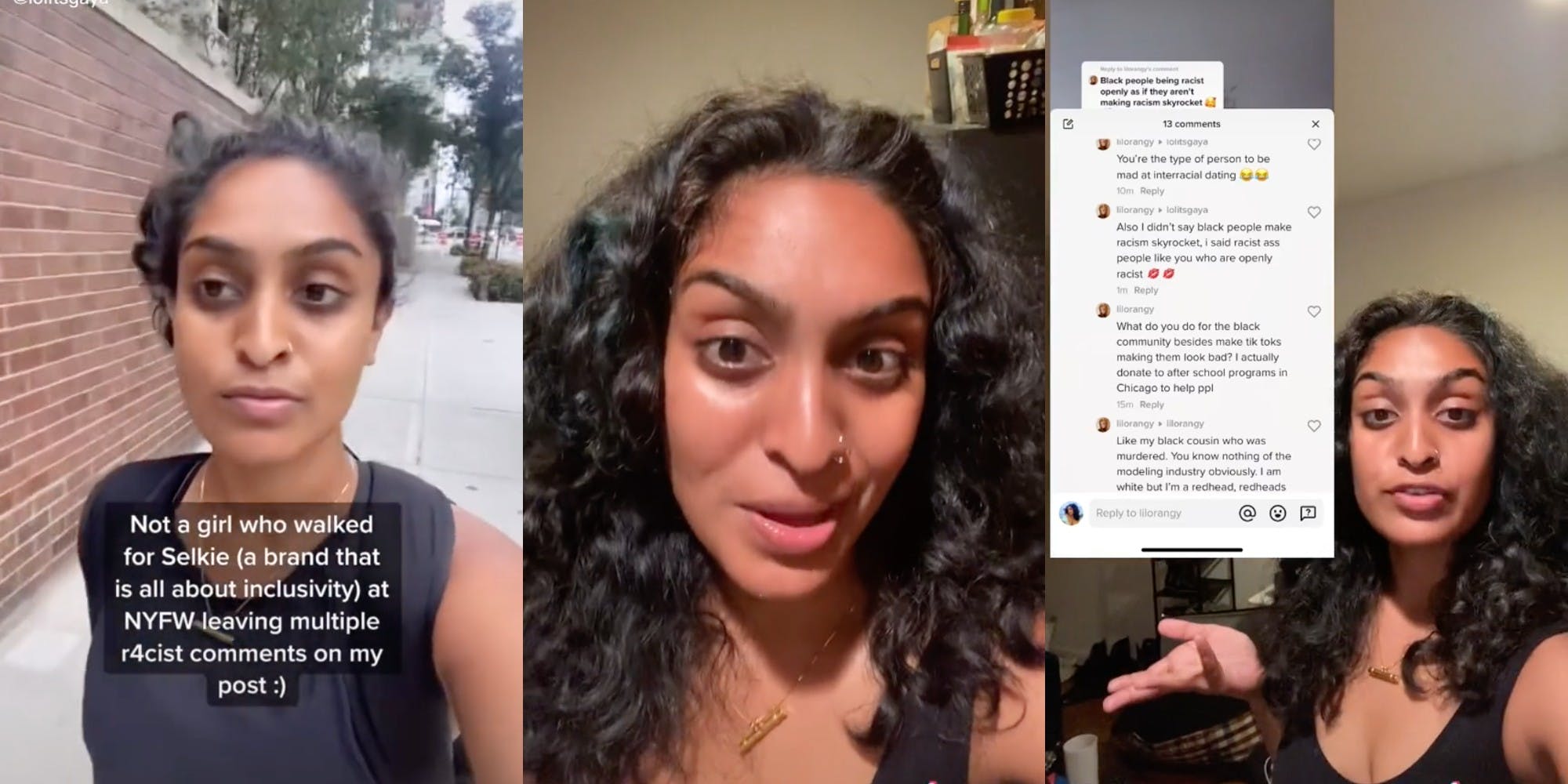 A woman of color on TikTok called out white model Ivy May for allegedly leaving racist comments on her social media posts.

The woman, known as Gaya or @lolitsgaya on the platform, told her followers in a viral video that May displayed a “white savior complex” that didn’t fit with the brands she modeled for. During New York Fashion Week, May modeled for Selkie, a brand that’s “supposed to be all about inclusivity,” according to Gaya.

Selkie is a woman-owned fashion company known for its viral handmade, flowy dresses. Self-branded as a no-waste company, they also “aim for cultural diversity from the inside out,” according to the company’s website.

Gaya shared screenshots of May’s comments under the username @lilorangy. May’s alleged account appears to have since gone private. (We’ve reached out to it but were otherwise unable to contact May.) The TikTok summarizing these accusations has 87,900-plus views as of Thursday afternoon, and Gaya’s TikTok boasts more than 187,000 followers as of press time.

One of May’s alleged comments stated that making TikToks does nothing to help the Black community, but “at least the art supplies I’ve sent gives them a moment of peace.” The comment appears to have been in regard to a conversation about ways to help Black communities.

A screenshot of another “white savior comment” from May shows her telling Gaya, “You’re the type of person to be mad at interracial dating.” She added, “Also I didn’t say Black people make racism skyrocket, I said racist ass people like you who are openly racist.”

The screenshots show May referencing her “Black cousin” in a way that sounded like the argument many racist white people use: How can I be racist when I have Black friends?

“You know nothing of the modeling industry obviously. I am white but I’m a redhead,” May allegedly added. In reply to another comment, she said, “White people are allowed to walk just as Blacks are.”

According to Gaya, May tried to gaslight her and denied being racist. She also told Gaya’s queer mutual friend to “take your little purse and run along.”

It appears that May was managed by Identity, a modeling agency founded in 2017. However, it’s unclear if the company still manages May, as her model page on the site appears to have been deleted.

Gaya wrote in a comment on her TikTok that Identity reached out and told her they were “extremely disappointed” by the way May conducted herself and apologized for the way she was insulted. Identity did not respond to the Daily Dot’s request for comment.

Selkie’s TikTok account commented on another one of Gaya’s videos regarding the comments, saying, “I’m so sorry you went through this! We honestly had no idea, and are shocked and disgusted to hear about it.” Selkie did not respond to the Daily Dot’s request for comment.

Gaya did not respond to the Daily Dot’s request for comment.