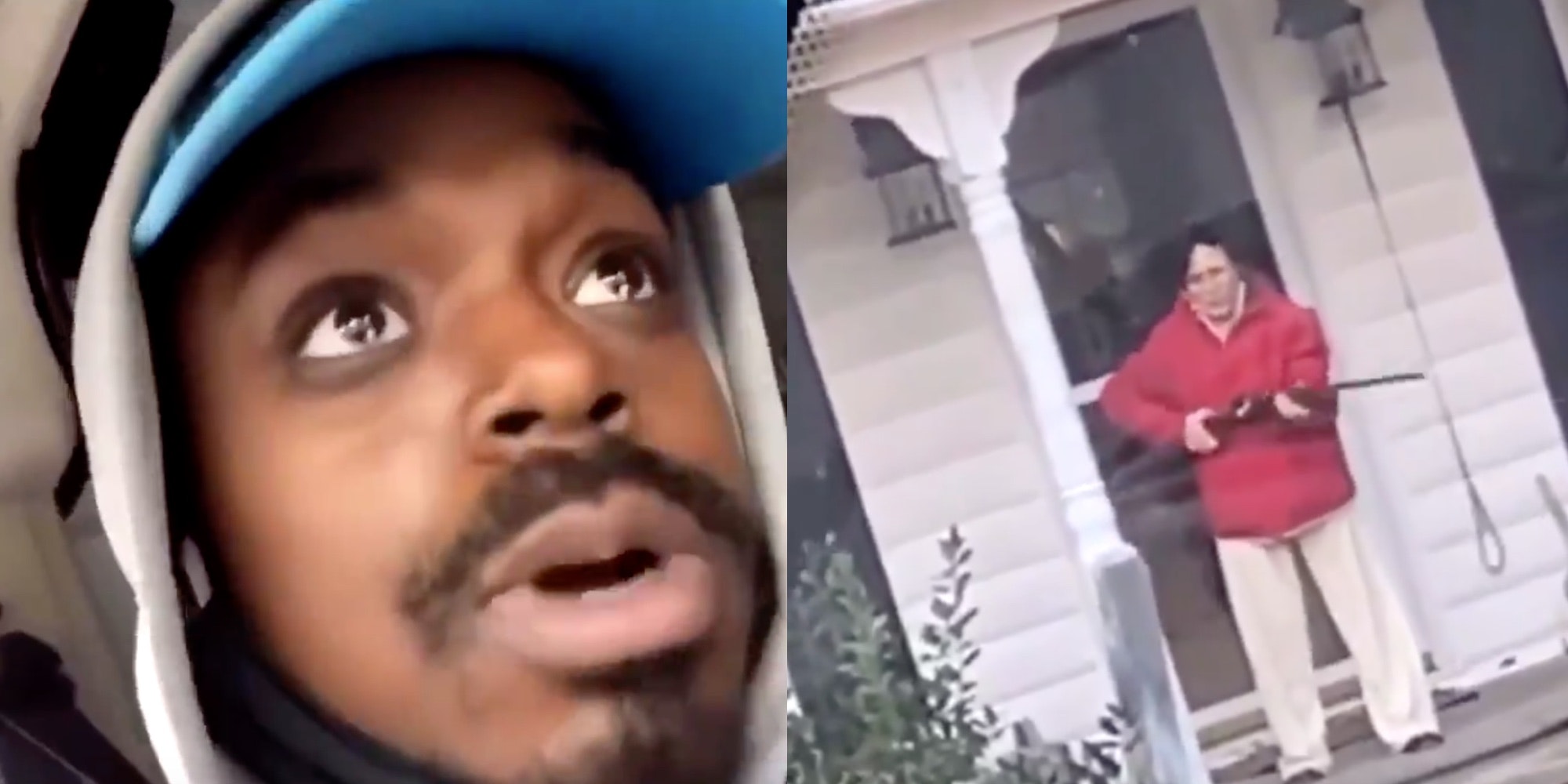 A new video circulating social media is adding to the list of things Black people apparently can’t do in the United States without being perceived as a threat.

A Black man who was reportedly delivering packages for Amazon pulled up to one house in his vehicle and started recording after the white woman who lives there came out onto her porch and pointed a gun at him.

It’s unclear where the video originated, and if any other interaction happened between the two before or after the 20 seconds that have gone viral, but the driver seems absolutely flabbergasted at the turn of events.

“Straight got the gun pointed at me, like what is she doing?” he asks as the woman stares him down from across the yard. “Like, what the fuck, bro?”

Commenters were appalled at the video but seemed less confused than the driver.

“All she knows for sure is he’s black,” one Redditor pointed out.

There was also a debate as to whether the item hanging from one of her porch lights was a dog leash or something purposely configured to look like a noose.

A similar incident happened in 2020 when another Black Amazon driver recorded a white man who allegedly just cut him off and pulled a pistol on him because he “felt threatened” by his mere presence—in an Amazon delivery van.

And it’s hard not to compare these events to 2020’s most high-profile instance of white people pulling guns on Black people who simply happen to be near their house—the McCloskeys aiming guns at Black Lives Matter protestors in St. Louis, Missouri.

That incident sparked a nationwide debate over gun control and what constitutes as “stand your ground.” Some hailed the McCloskeys as heroes, insisting that seeing Black people marching past your home is somehow grounds to brandish a firearm for “protection,” while others believed the incident to be a prime example of both racism and why stricter gun laws are necessary.

While the McCloskeys are facing charges for brandishing weapons, it’s unknown if the Amazon delivery driver in the most recent video pressed charges against the woman for pointing her gun at him, although plenty of folks pointed out that he would be well in his right to do so.

But one of the more shocking revelations to come from this is that Amazon allegedly doesn’t refuse service to people who pull guns on their drivers.

“I delivered to a house last week and the rabbit (Amazon device for delivering) told me in the notes to ‘please call/text customer upon arrival, customer has threatened other drivers with a gun,’” claimed u/skin_peeler.