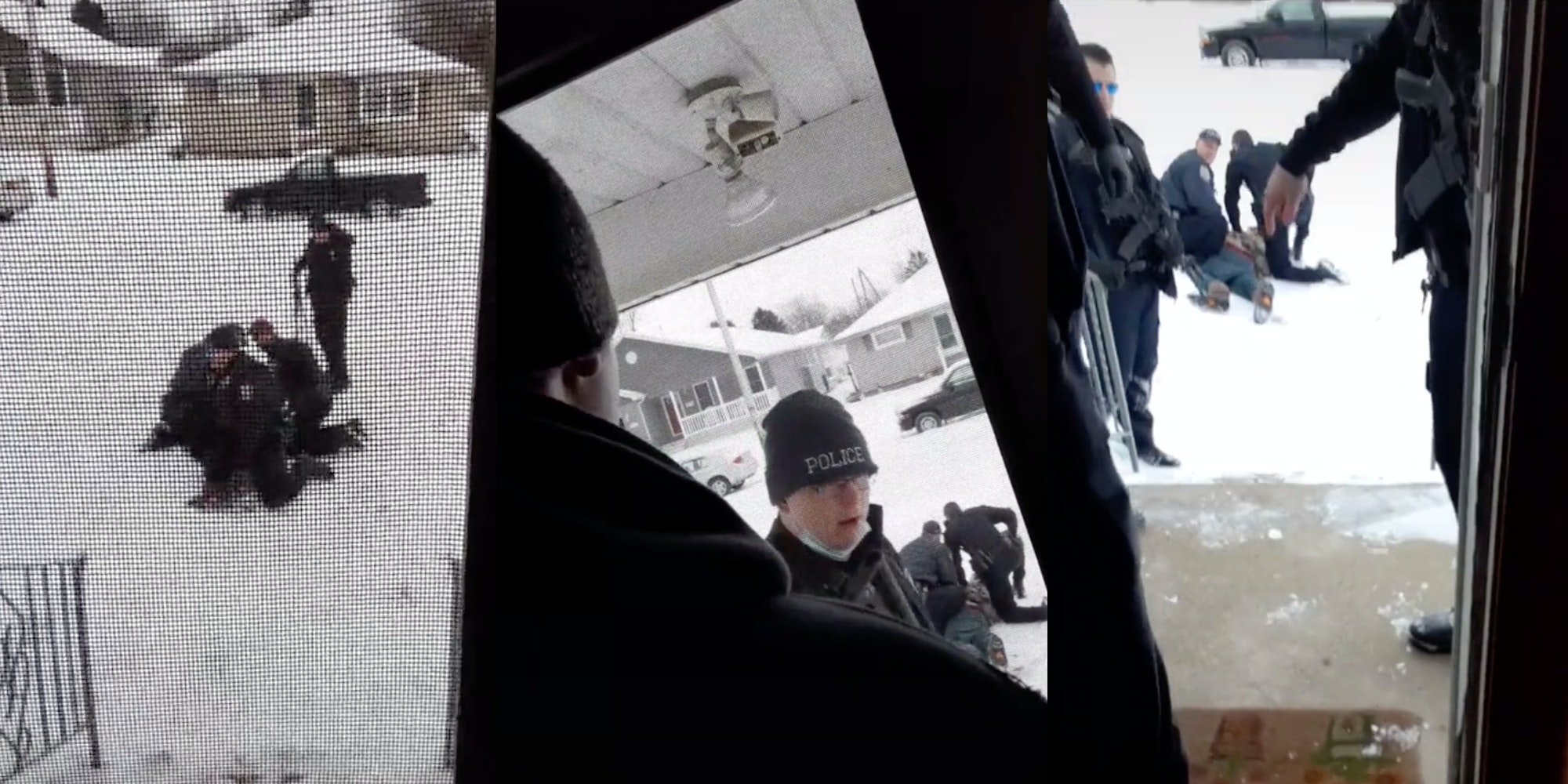 A new viral TikTok shows five cops arresting a single man, then threatening to arrest the people filming the altercation from inside their home.

TikTok user @_your.not.my.dad_ , whose real name is Kerestan Marie Jackson, uploaded the video yesterday morning. It has since been viewed more than 235,000 times and spread to Reddit’s r/PublicFreakout, where it has racked up more than 19,000 upvotes at the time of this writing.

Jackson records the majority of the clip from behind a screen door, through which multiple officers can be seen pinning a man to the ground. Three officers crouch next to the man, while two additional officers hover off to the sides.

A man identified as Jackson’s father stands in the doorway and questions the officer’s actions. He notes that police didn’t ask any questions or state their purpose for the arrest.

“You didn’t say shit,” the man says. “Why the fuck you’re here, why you wanted him, nothing.”

When Jackson asks, “Why are they even arresting him? What is going on?” one of the five cops arresting the man points in their direction and asks an inaudible question. Jackson’s father responds that he is “inside my own fucking house” before the officer demands that he “step out here.”

The officer then walks toward the door and repeats his demand several times as Jackson’s father says he’s done nothing wrong and does not wish to exit his home. He asks the officer why he has to step outside, and the officer informs him that they’re “going to get a search warrant for this house.”

The officer then steps up to the door, mask around his chin, and opens it without permission. He tells Jackson’s father, “Step out of the house, you’re going to go to jail.”

The top comment on the Reddit post links to the 1987 ruling in City of Houston v. Hill, which states that the “freedom of individuals verbally to oppose or challenge police action without thereby risking arrest is one of the principal characteristics by which we distinguish a free nation from a police state.”

In several follow-up videos, Jackson clarified some of the details of the incident.

“Also, there was no warrant for them to be able to enter my house,” she adds. “So, in my opinion, I feel like the cops were in the wrong.” In a second follow-up video, Jackson adds that police essentially arrested Jace on “hearsay.”

“How do you even know you got the right guy?” Jackson asked, pointing out that police officers didn’t ask for names before they started cuffing people. “They just completely handled the whole situation wrong.”

Commenters on both TikTok and Reddit urged Jackson to lawyer up. In a comment, Jackson confirmed that they intend to do so. “We are going to fight this,” she wrote.

The Daily Dot has reached out to Jackson.

The post Woman films 5 cops arresting man from inside her home—they threaten to arrest her and her dad appeared first on The Daily Dot.

‘Free speech’ TikTok clone Clapper quickly got overrun by anti-vaxxers
Will Comic-Con 2021 be canceled due to the pandemic?
Advertisement