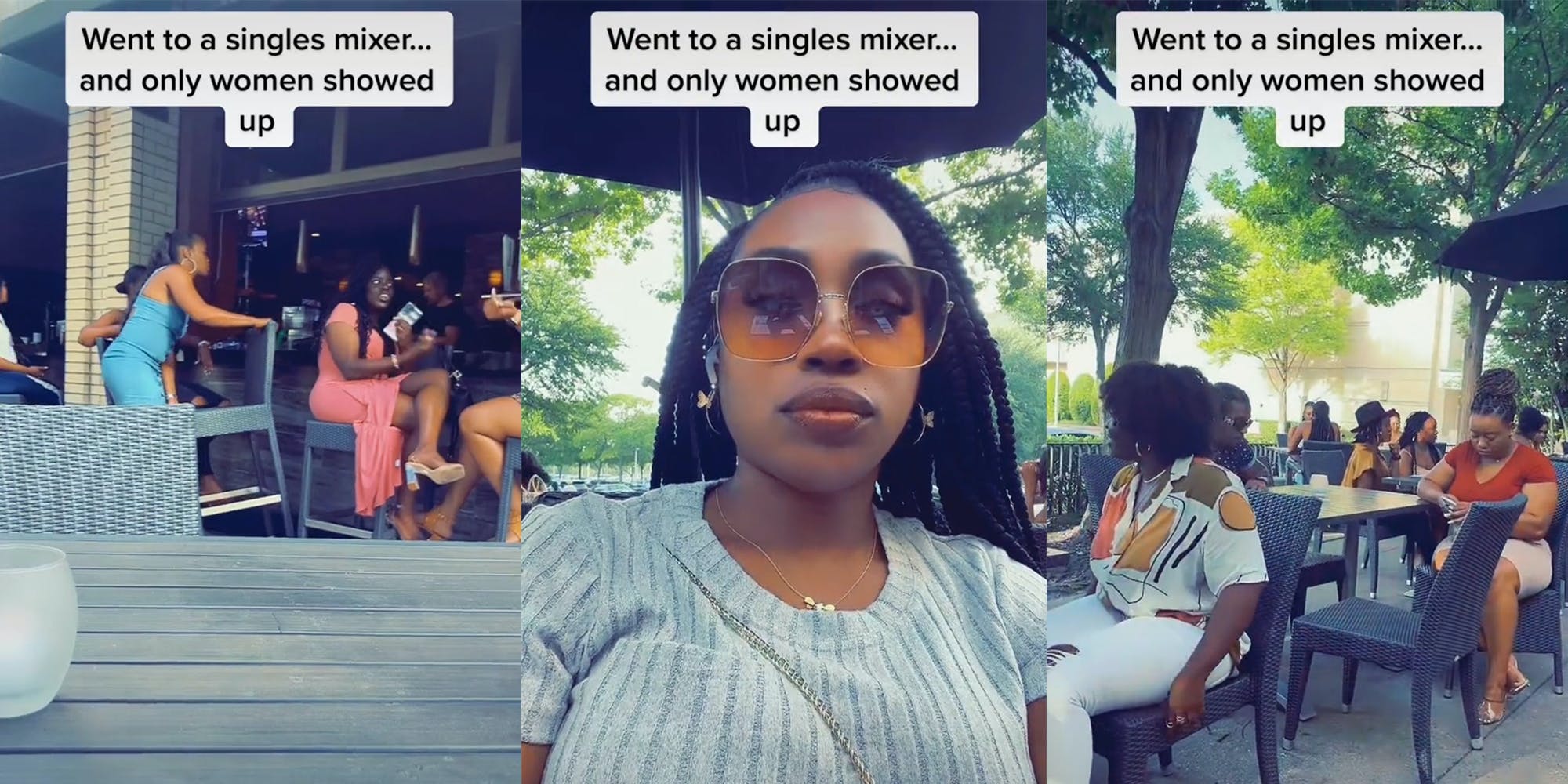 A discussion of singles mixers and modern dating dynamics has taken shape on TikTok after a woman filmed herself at a mixer that she claimed only women showed up to.

In her video, @dannyd2cute shows the event that was intended to be attended by both men and women was lacking in the former.

“Single forever,” the video, which was viewed nearly 500,000 times, is captioned.

Some commenters were critical of events like these that are geared toward providing a forum for available men and women to meet.

“Woah, you think I’ma show up to something y’all gon’ criticize me from the time I walk in, ie; what I drove, wore, talk, ate, etc.,” one commenter wrote.

“Five bros could’ve walked in and the women would’ve went to judging them from head to toe,” another said.

“I mean y’all said y’all have fun without us and ‘y’all don’t dress up for us,’ so mingle with the single,” a commenter wrote.

Others, however, were critical of the way many men responded to the video.

“All these ‘men’ judging these women like they know these women personally,” one commenter wrote. “Why y’all so quick to rejoice at single women? Kinda sus.”

“Whee the comments,” a commenter wrote. “Why are y’all projecting all these things onto to these women yall don’t even know?”

“Its the comments for me lol,” another commenter wrote. “This shouldn’t have triggered y’all emotions in this way lol.”

The video was eventually stitched by a popular content creator, @pierrefleury_, who found it odd that men were mocking a space created for them to meet available women.

“So this went viral on Twitter, and it got me thinking about something I already knew and put it in a different perspective for me,” he says. “Because men were in the comments saying, ‘Oh this is weird, strange, looks desperate.’ And what’s wild to me is that somebody literally created a space where men can approach women that want to be approached and talk to women that want to be talked to, and men saw that as strange.”

He concludes that in his opinion, men think any woman outside of a home is available, calling it “entitlement.”

Viewers applauded @pierrefleury_’s points, arguing “you sound like you actually listen to women” or simply “has some decent critical thinking skills to see the big picture.”

“Why would men meet us halfway when they can approach us when we can’t escape,” one woman sarcastically said “Like when we are at work or pumping gas … happened to me monday.”

“If men aren’t breaking a woman’s boundaries it doesn’t feel right to him,” another claimed.

“Non consent attracts them more than a consenting space,” another said.

@pierrefleury_ has nearly 100,000 followers on the platform, and his stitch was viewed 1.6 million times.

The Daily Dot has reached out to both @dannyd2cute and @pierrefleury_ via Instagram direct message.

From Myspace to Mythical, Smosh co-founder Ian Hecox and CEO Daniel Tibbets share how the brand has grown over 16 years
‘Any problems? Pray about it’: Hilarious airport worker lays down the law in viral TikTok
Advertisement