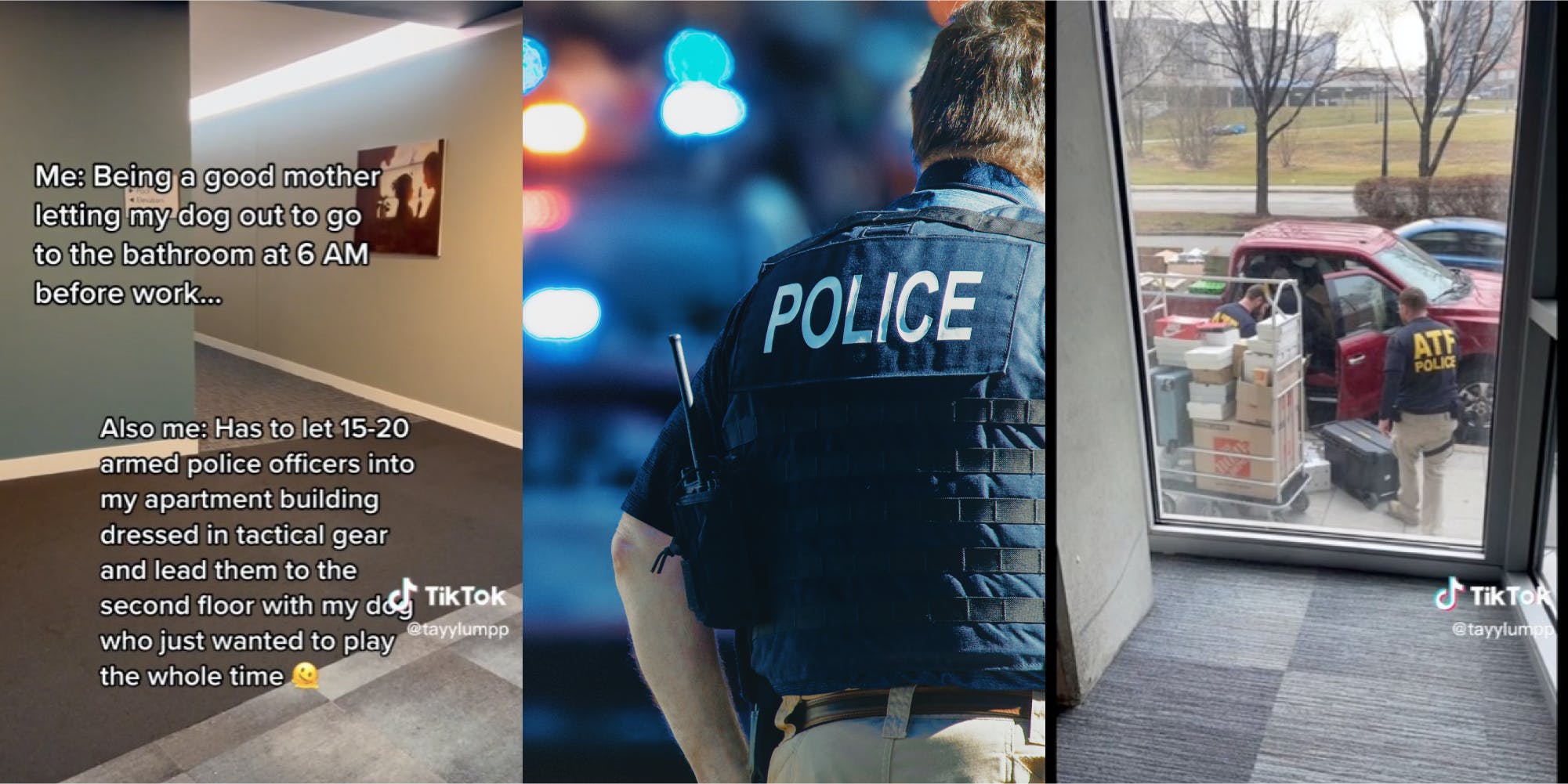 A woman went viral on TikTok after revealing how she let in a SWAT team looking for her neighbor into an apartment building.

The video was uploaded by user Taylor (@tayylumpp) where she recorded a hallway with the text overlay reading, “me: being a good mother letting my dog out to go to the bathroom at 6 AM before work.” Then another caption pops up, reading: “Also me: has to let 15-20 armed police officers into my apartment building dressed in tactical gear and lead them to the second floor with my dog who just wanted to play the whole time.” In the background, one officer could be heard yelling, “Police! Open the fucking door,” along with a name that sounds like “Joey” or “Cody.” The camera shifts over to an ATF agent standing outside the window next to a red pickup truck with a cart full of boxes.

Taylor explained in the caption where this occurred, writing, “Never a dull moment living in good ole MKE (Milwaukee, Wisconsin),” along with a hashtag about a search warrant.

The video garnered 7.5 million views since it was posted on December 9, resonating with viewers as they shared their similar experiences.

“When i worked front desk at luxury apartments this happened very often. Cameras were my bff cause i was nosey AF. I saw many things i shouldnt have,” one viewer shared.

“I’m sorry but the fact that this HAPPENED TO ME TOO BYE and my dog just wanted to play with the police dog,” a second said.

“Same happened to me in Milwaukee! Cops rang my buzzer and I ended up letting in a whole team! Ate my dinner at the peep hole that night,” a third wrote.

Others requested updates to the story.

“Dang what was all that stuff at the end? We’re they doing an whole crime scene investigation?” one person asked.

“What the hell happened,” a third questioned.

Since people requested updates, Taylor delivered by posting two follow-up videos. In the first one, Taylor shared how she woke up at 5:30 in the morning to let her dog out to go to the bathroom. When she walked out of her apartment, she saw a man “standing in the vestibule” and “trying to get into the apartment with one of the key fob.” The camera shifted to the green screen behind her where she stands with the man. After he showed her his badge and asks if there was another way in, Taylor led him to the side of the building and let him in.

Then, he opened the door, allowing a group of 10-20 men in tactical gear inside. The background changed to a screen with Tayor standing on the stairs, with the group walking up the steps. Once she directed them to the door they were searching for, they told her to leave and that’s where the original video takes off.

In the second follow-up video, Taylor begged “Joey/Cody” not to “put a hit on her.” She apologized and explained she initially thought she was helping, attributing to them doing “welfare checks.” She reiterated her plea, sharing how didn’t want to be in witness protection again. According to Taylor, management knew about ATF showing up but not her. The camera shifted over to “Joey/Cody’s” door. Apparently, he didn’t live there but was staying with the person in the apartment. Now, the apartment is vacant.

The post Woman taking her dog for a walk lets SWAT team into apartment building appeared first on The Daily Dot.